How spinifex gets its hole

Researchers have long been curious about the striking growth form of spinifex and now UNSW Sydney scientists say soil microbes are the answer. 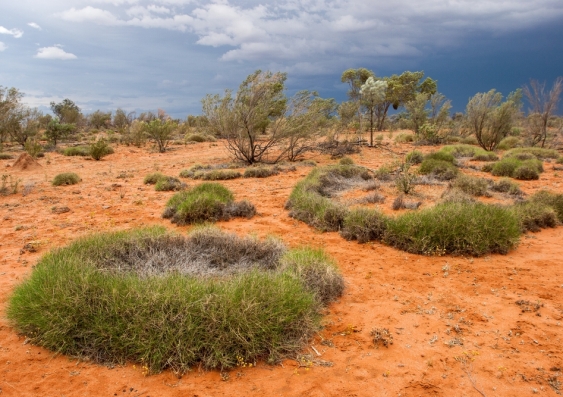 UNSW Sydney scientists have solved the mystery of the spinifex hole, finding that an accumulation of pathogenic soil microbes impedes seedling emergence and subsequent growth in the centre of spinifex rings. Image: Shutterstock

Anyone who has visited the Australian outback would be familiar with spinifex grasses, which cover almost a fifth of our continent.

Like many scientists, they may have also wondered why this iconic arid grass grows in striking ring shapes.

Previous studies have tested whether spinifex rings could be caused by termites, water availability or nutrient depletion, but none has provided a convincing explanation.

Now scientists from UNSW Sydney have found that pathogenic soil microbes play a role in how the spinifex got its hole.

Their study, the first of its kind in an arid ecosystem, has been published in the Australian Journal of Botany.

Professor Angela Moles and Neil Ross from UNSW Science's Evolution & Ecology Research Centre tested the idea that an accumulation of pathogenic soil microbes might impede seedling emergence and subsequent growth in the centre of spinifex rings.

“Consistent with our hypothesis, we found that sterilising soil from the inside of spinifex rings significantly increased spinifex seedling emergence,” Prof. Moles said.

Their results suggest that die-back in the centre of spinifex plants might be explained by older parts of the plant succumbing to a build-up of pathogenic soil microbes through time, whereas new seedlings tend to establish more at the outside edge of the rings where there are fewer pathogens in the soil.

“Most people tend to think of the beneficial effects of microbes on plant growth,” co-author and director of the Evolution & Ecology Research Centre, Professor Angela Moles, said.

“Overall, these results suggest that soil pathogens are quietly shaping the way the plants around us grow.”

The scientists have recommended further study to identify the types of soil microbes involved in the establishment of arid-zone plants, as well as the different types of microbes that are most important for seedlings at different times or under different germination conditions.

Read the study in Australian Journal of Botany.