UNSW scientists have created a 40-square-kilometre sanctuary for native Australian animals in the Sturt National Park that is completely free of feral animals such as rabbits, foxes and cats. 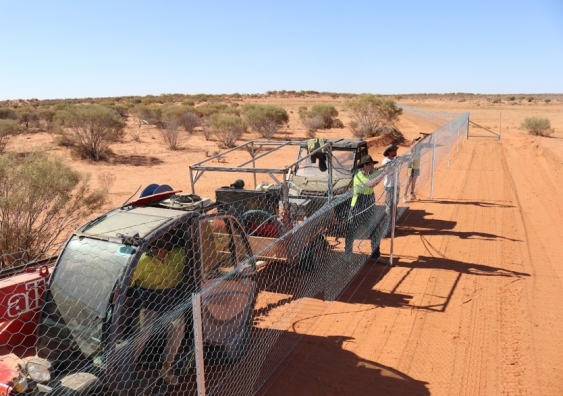 One of the fenced off areas in Sturt National Park. Picture: UNSW

One of the largest rabbit-free areas in Australia has been created in Sturt National Park in far western NSW in a major project preparing to reintroduce locally extinct mammals such as the bilby to desert habitat.

After completing 40km of specialised feral-proof fencing in October 2018, the Wild Deserts team, a partnership between UNSW, Ecological Horizons and the NSW government, has completed the mammoth task of eradicating every last rabbit, cat and fox from two fenced exclosures, each 4km x 5km (totalling 40-square-kilometres).

UNSW scientist and Wild Deserts project co-ordinator Dr Reece Pedler, who lives in the park, said it had been a been a huge effort to eradicate rabbits, cats and foxes from such a large area.

“This 40 square-kilometre area now represents one of the largest rabbit-free areas in the country – this is an amazing achievement given these deserts supported millions of rabbits in the past, which decimated vegetation, causing soil erosion and the loss of our native fauna,” he said. 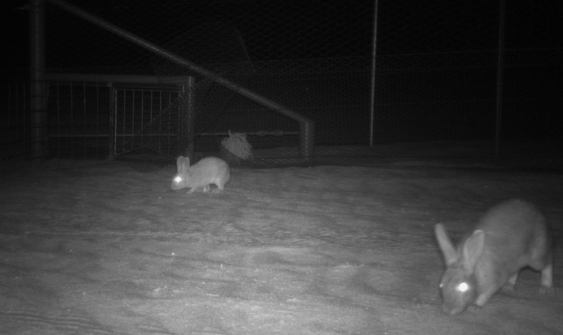 Rabbits caught on night-vision camera prior to them being eradicated from the area in Sturt National Park. Picture: UNSW

“There are many native animals that we haven’t seen in this area in decades because they’ve been killed off by feral foxes and cats,” Mr Kean said.

“This new feral-free zone is great news because we now have 40 square kilometres in the Sturt National Park which will be a safe haven for protecting and recovering native mammal populations.”

Team leader of the Wild Deserts project, Professor Richard Kingsford, said the current drought had actually been a silver lining for the project.

“It has meant that along with many native animals and plants, the ferals have also done it tough,” he said.

Wild Deserts Ecologist, Dr Rebecca West, said like much of the country, the area had received less than 100mm of rain over the last two years – the driest conditions since rainfall records began, leading to low ground cover and frequent dust storms.

“Not only has the drought reduced rabbit, cat and fox numbers but it has also made tracking easier over large areas of bare red sand,” she said.

In addition to extensive tracking, the team also regularly used remote cameras and spotlight surveys over the last year to make sure that all feral animals were found.

The desert area is now well placed to take advantage of any late summer rain which will support vegetation and invertebrates – the food for the seven locally extinct mammal species the team will soon introduce, including the western quoll, burrowing bettong, two species of bandicoot and stick-nest rat. 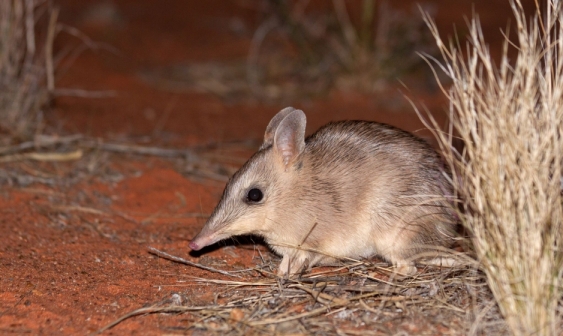 The Western Barred Bandicoot is planned to be reintroduced once the drought breaks. Picture: UNSW

“If the rain comes in the next few months, we hope to reintroduce bilbies first,” said Dr West.

Already, the Wild Deserts team has had an unexpected discovery in their current intensive ecological surveys – they caught a threatened plains mouse.

“Excitingly, this is the first time that this small mammal species – which was thought to be extinct – has been recorded in Sturt National Park,” said Dr West.

“It was rediscovered in NSW in 2015. This is all the more surprising given the intense drought that has gripped western NSW and which Sturt is currently experiencing. The removal of feral cats, foxes and rabbits will likely set the scene for this species to recolonise the area.”

The team is also expanding the project into a massive training area of more than 100 square kilometres, where these small mammals can take back their desert domain, once they have bred up their numbers. This represents another major initiative by the team, not attempted before at the same scale, with the linking of predator proof fences onto the Dingo Fence.