Researchers, including those from UNSW Sydney, have synthesised complex symmetrical zinc crystals in liquid gallium which can potentially be used in a range of catalysis applications. 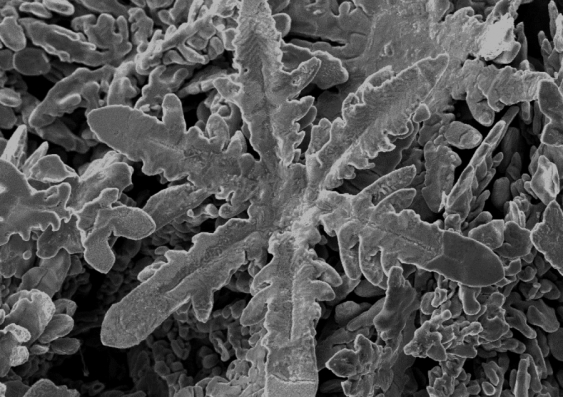 It’s beginning to look a lot like Christmas at UNSW Sydney’s School of Chemical Engineering where researchers have grown crystals made of zinc that look like snowflakes - inside a liquid metal.

Apart from their structural beauty, these liquid metal-grown crystals can enable future processes for making catalytic materials for producing hydrogen from organic fuels. The metallic crystals can also be specially formulated, during their synthesis and extraction, to make semiconductors for electronic and optical devices of computers, mobile phones and solar cells of the future.

The team’s findings have now been published in a paper in Science, with first author and former PhD student Dr Shuhada A. Idrus-Saidi and co-first/corresponding author Dr Jianbo Tang explaining how the shape of the zinc crystals can be adapted depending on a range of different inputs.

Various crystal structures are possible given amended concentrations of the solute, the time taken to grow the crystals, as well as the temperature and pressure within the system.

“In a broad sense, our method is useful for making various types of metallic crystals with selected facets,” Dr Tang said.

“This enables us to control not only the shape of the crystals that are grown, but also their performance in applications such as catalysis, where different exposed crystal facets can make a significant difference.”

During their experiments, the team – which also includes UNSW Professor Kourosh Kalantar-Zadeh and co-authors from multiple UNSW schools, MacDiarmid Institute for Advanced Materials and Nanotechnology (New Zealand), Australian National University, RMIT University and University of Sydney – had to solve the problem of extracting the crystals from the liquid gallium.

The high surface tension of the gallium makes it complicated to isolate the crystals once they have formed. The solution was to apply a voltage so the surface tension was reduced and the synthesised crystals could then be filtered out as the gallium was passed through a porous membrane.

When zinc was used as the solute, the crystals formed in the liquid gallium strongly resembled snowflakes, stemming from the hexagonal lattice structure of zinc itself.

The team also used a variety of other metals as solutes, such as tin, bismuth, silver, nickel and platinum which created their own unique crystal shapes.

In the case of zinc, varying the growth conditions (such as time, temperature, and pressure) gave rise to substantial structural changes.

The observations indicated that increasing the growth duration, in general, led to larger crystals being formed.

Increasing the temperature also typically increased the size of the crystals, as well as producing many more 12-branched structures which occur when two overlapping hexagonal crystal seeds grow concurrently – as they do with snowflakes.

Simple fractal shapes were obtained when zinc crystals were grown at elevated pressure (5 bar) and the overall result of the work is the possibility to greatly expand the accessible crystal library using the new process.

“The findings advance the understanding of crystal growth using liquid metals as the solvent and present a viable method for extracting these crystals,” Professor Kalantar-Zadeh said.

“The use of liquid metals offers a largely unexplored pathway toward the growth of metallic nanostructures that does not rely on reactive soluble precursors, enabling unimpeded growth and leading to the formation of complex solidification patterns.”

Different shaped crystals can be synthesised by using a different metal solute, such as nickel (left) and bismuth (right). Images supplied by Dr Jianbo Tang

The researchers say that being able to grow crystals with specific facets is important when they are subsequently utilised in catalysis.

“In some catalytic reactions, for example in the conversion of carbon dioxide, it happens much faster on one facet of the crystal compared to another. Designing materials and structures with selected facets is called facet engineering and it is becoming important where there is a need to create a particular facet to improve catalytic efficiency,” Dr Tang said.

“For a certain process it may be better to have a square-shaped crystal for catalysis, or a flatter shape, and we can see from this research how we can synthesise that facet depending on the various input parameters.

“This is the same process that happens in the air with snowflakes, but now we are able to do it with crystals in liquid metal.”