Opinion If we really want an ideas boom, we need more women at the top tiers of science

Three of the nation’s leading scientists say that Australia is "frozen in time" and is throwing away the opportunity to harness the intelligence and prodigious drive of women researchers. 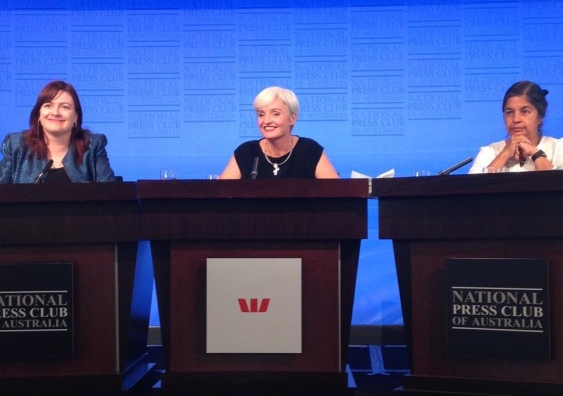 On Wednesday March 30, Emma Johnston, Nalini Joshi and Tanya Monro spoke at the National Press Club for a special Women Of Science event. Here they outline their views on how to promote greater participation by women at the top levels of science.

Few of us would imagine accepting that our daughters have fewer options than our sons. And yet that is exactly the situation we allow to persist in Australian science, technology, engineering and mathematics (STEM) today.

The 2016 woman scientist’s story starts well enough, particularly when you compare it with her 1960s counterpart.

Fifty-six per cent of undergraduates and half of PhD students are female. Even better, almost 60% of junior science lecturers are female.

But towards the top end, things are very different. In STEM, women comprise about 16% of top-level professors. That figure rises to 23% if you include medicine.

Our own personal stories reflect this: when Tanya Monro arrived at Adelaide University in 2005 she was its first female professor of physics, even though there had been physics professors there since the 1880s.

In 2002, Nalini Joshi was appointed the first woman professor of mathematics at the University of Sydney, Australia’s oldest university.

In this respect, Australia is frozen in time. We are throwing away our opportunity to harness the huge intelligence and prodigious drive of the females already in the research workforce. How is this so different to the 1950s when talented women like Ruby Payne-Scott, one of the inventors of radio astronomy, when she was required to resign as soon as she was married?

The push now is often subtler, embedded in principles, conventions and bias that is rarely visible. Modern science is still conducted within organisational cultures that resemble a feudal monastery; information is power and it is tightly held, it is difficult to find anything unless you know the right person to ask, survival rests on competition to be noticed by a “nobility”.

Unconscious, subjective conventions have evolved in response and that impacts everyone, both men and women.

As a nation, by forcing half our potential innovators to work much harder to reach the same seniority as the other half, we are doing ourselves a grave disservice.

The standard of living for future Australians depends on how effectively we can bring innovation into our businesses. We know that 75% of jobs in the fastest-growing industries require STEM skilled workers, and since last year’s announcement of the National Innovation and Science Agenda (NISA), it appears we’re in an ideas boom.

NISA proposes “encouraging our best and brightest minds to work together to find solutions to real world problems and to create jobs and growth”.

We agree. And we propose that the single most powerful response Australia could mount to this challenge would be to transform the relationship between women and science, technology, engineering and mathematics.

Australia is at, or near the bottom, of the OECD rankings in a range of critical innovation measures. The reasons for this are complex and multi-faceted, but a big one surely has to be that a huge proportion of our great thinkers – our potential science and innovation leaders – are being subtly and pervasively pushed out of STEM. Not based on their merit but based on gender.

A 2014 study found that without any information other than a candidate’s appearance (making gender clear), both males and females are twice as likely to hire a man than a woman to complete a mathematical task.

A study published earlier this year found that both male and female undergraduates were more likely to explain a woman’s science-related setbacks by mentioning factors about her, such as “she was let go because she messed up an experiment". Whereas a man’s setbacks are more likely to be explained by contextual factors, such as “he was let go because there were budget cuts”.

Then there’s the “motherhood penalty”, with negative effects on income, career advancement, and perceived competence relative to both fathers and women without children.

Australia must pursue change. The benefits of that change will clearly go beyond gender, beyond sexual identity, race and ethnicity. That change will make our society become more creative, abundant, and innovative.

There’s no doubt that improved female engagement in STEM will drive all areas of science and innovation, and achieve aspirations articulated across the whole NISA agenda.

There’s no single solution or silver bullet, but the prize is big enough that it’s critical that we tackle every facet of this issue.

We need to challenge the assumptions: the first and biggest is that it’s just a career pipeline issue. It isn’t, and we can’t just wait for the passing of time to solve it.

Next we need to re-think what a good research track record looks like. When Tanya Monro secured her Federation Fellowship in 2008, she had three children and had moved across the world to set up a lab from scratch in the five years over which track record is traditionally assessed. At the time, the application process provided no mechanism for extending the time window over which her productivity was assessed.

We need to re-think the language we use to describe women and their behaviour. Men are often called “assertive” where women are called “aggressive”. Male researchers who have children are more often described as “scientists”; female researchers who have children are often described as “mothers”. We can be both feminine and assertive. We can be both outstanding research scientists and loving mothers.

And we need to work on shifting the conscious and unconscious bias that many of us don’t want to admit exists. Science goes to great lengths to remove bias from observations and experiments, yet many in science fail to adequately recognise and respond to our own biases.

One of the most powerful ways to combat this bias is via the relentless promotion of role models – as NISA suggest - we should “highlight the amazing stories of Australia’s successful female innovators and entrepreneurs”. However, the media consistently under-represent women in science. One only needs to think of television science celebrities, and even in the social media, to find that 92% of the most successful Twitter scientists are male. And when female scientists are mentioned, they tend to focus on our appearance or parental status.

All three of us have done our bit to increase the representation of women in the media, taking every opportunity to speak in public and on radio and television – through news, Q&A, the National Press Club this week, Coast Australia, Catalyst, and other radio, TV and social media.

The good news is that we know how to enact change. Some of it is as simple as structural and regulatory changes to increase early career job security, provide parental care that can be accessed by both parents, create flexibility in the workplace, enable career breaks with guaranteed re-entry, move towards anonymous grant and journal review processes, allocate teaching and administrative tasks in transparent manner and value those tasks.

We need to push against that “motherhood penalty”, and there have been some real gains in recent years. For example, changes to the Australian Research Council criteria, which now allows for the selection criterion of Research Opportunity and Performance Evidence (ROPE) to replace the concept of “track record”.

We must also embrace our national character: our diverse community, relatively flat hierarchy and willingness to challenge and take risks.

We must be willing to implement quotas or targets. You only have to look at the consistent success the Academy of Technology and Engineering (ATSE) has had in bringing in significant numbers of stellar female Fellows over the last decade, and the recent pleasing developments at the Australian Academy of Science (AAS).

We need to remind ourselves that whenever we see a space where there isn’t a diverse workforce we don’t have the best possible people for the task.

Part of the solution has already been underway in the United Kingdom for more than ten years. The Athena SWAN program requires participating organisations to look internally, find out where the holes in their own career pipelines are and propose action plan to address these holes. The charter then rates organisations based on these policies and practices, rewarding them with gold, silver or bronze awards.

The AAS and ATSE have joined together to mount a pilot of the Athena SWAN program as part of the Science in Australia Gender Equity (or SAGE) initiative. Thirty-two enthusiastic organisations have already signed up to participate in the pilot.

Even the first step, – data collection and analysis – will be a challenge for most pilot participants. Of course they know how many women work there and how many may be promoted there, but they have probably not considered questions like how many are in the eligible pool for the next promotion or how long a period qualified female staff have waited before being promoted.

The Athena SWAN evaluations in the UK tell us that the outcomes will encourage and improve the working life of everyone, whether they are men or women.

Australia stands today with an unparalleled opportunity to engage the next generation of potential scientists. We simply cannot afford to lose so many of the talented people that we produce. So many great ideas that go elsewhere.

Imagine if we could encourage and keep these talented people. Imagine the great ideas doubling our Nobel Prize winners. Imagine being in a room full of female STEM professors.

Imagine the ideas boom then.

Nalini Joshi is Professor of Mathematics, University of Sydney.

Study reveals patterns in STEM grades of girls versus boys