Illuminating Earth’s past for future generations

Earth's geological history, human evolution and the diversity of ancient flora and fauna are some of the key themes being investigated by scientists in a new UNSW research centre. 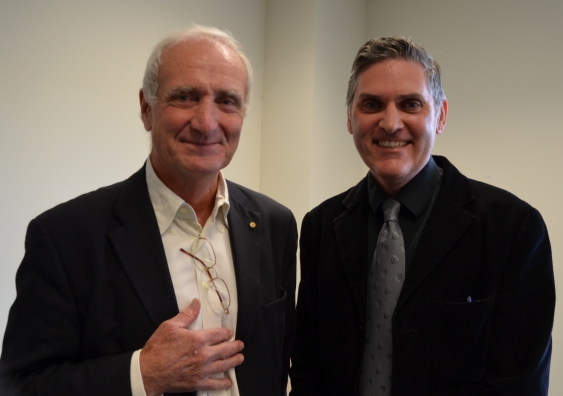 The geological history of the Earth, the emergence of life, the diversity of ancient flora and fauna, and the evolution of humans will be key themes of investigation for scientists in a new UNSW research centre.

PANGEA – the Palaeontology, Geobiology and Earth Archives Research Centre in the School of Biological, Earth and Environmental Sciences – was launched this week by science journalist and ABC Radio National broadcaster Robyn Williams AM.

UNSW Associate Professor Darren Curnoe, who co-discovered the remains of an enigmatic group of ancient humans in China dubbed the Red Deer Cave people, has been appointed director.

“Our vision is to illuminate Earth’s past for future generations,” said Associate Professor Curnoe.

“At UNSW we are fortunate in having one of Australia’s largest concentrations of researchers in palaeoscience and related earth and environmental sciences.

“Our new Centre will establish UNSW as a national leader in research, training, industry engagement and public outreach on the evolutionary history of the Earth, its interconnected systems, life and landscapes,” he said.

UNSW Professor Suzanne Hand, an expert on Australia’s ancient fauna through her research at the Riversleigh World Heritage Fossil Site in Queensland, and UNSW Professor James Goff, an expert on tsunamis and other natural hazards, have been appointed as deputy directors.

Head of the School of Biological, Earth and Environmental Science Associate (BEES), Professor David Cohen, said the School had a long and distinguished history in research and training in the earth sciences.

“Our research covers from the core of the Earth to the upper parts of the atmosphere. I’m certainly looking forward to the many insights into the evolution of the planet that PANGEA will deliver for us in the near future.”

UNSW Deputy Vice-Chancellor (Education) Professor Merlin Crossley said: “Looking back in time is an important area of science. By studying the past we can often see the future.

“I am delighted that Darren Curnoe and the very fine School of BEES are establishing this new centre to provide visibility, coordination and momentum to our many academics who are world leaders in studying the history of the Earth.”

Robyn Williams AM said the School also had a great tradition of science communication and would play an important role in informing the public about “the wonderful background to where we came from and who we are”.

The Centre will have five main “ancient environments” research themes: