Thanks to knowledge from his elders, La Perouse community’s first indigenous PhD graduate in microbiology, Dr Shane Ingrey, is using modern science to shine a spotlight on the medicinal potential of local plants. 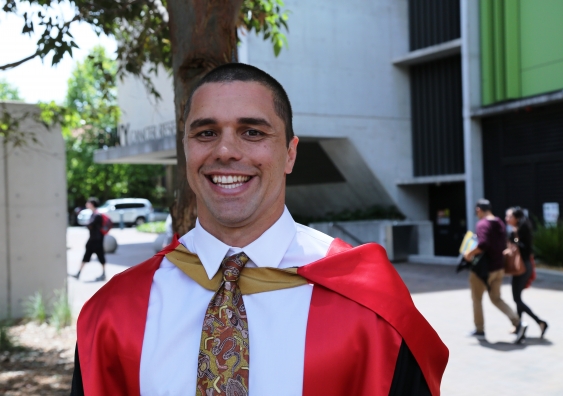 Dr Shane Ingrey, the fourth indigenous student to graduate from UNSW in 2015 with a PhD, a record for the university. Photo: Dan Wheelahan

The Dharawal people of southern Sydney have known about the medicinal benefits of the local flora for millennia, but thanks to knowledge passed down the generations, the local community’s first indigenous PhD graduate in microbiology is using modern science to shine a new spotlight on the plants' potential.

Dr Shane Ingrey has become the fourth Indigenous student to graduate from UNSW with a PhD in 2015, receiving his doctorate in microbiology during a ceremony on the Kensington campus last week.

As he told The Australian newspaper, his study, which put traditional knowledge under the blowtorch of modern microbiology, has found a scientific explanation for some of the plants’ medicinal qualities — and could yield new treatments for antibiotic-resistant bacteria, viral infections or even cancer.

“When I was talking to my grandmother about these plants, she would say which ones to use and which ones not to use. She’d say: ‘Use these plants for your study but keep these other ones to yourself’”.

Dr Ingrey isolated endophytes — bacteria and fungi that live in plant tissue — and screened their DNA for genes that produce antibiotic proteins.

When the tests came back positive, he cultivated the natural products of these organisms and tested them again for antibacterial and antifungal activity.

The project identified five natural substances already known to have antibiotic qualities, as well as a previously unknown polyketide — a compound produced by the same class of enzymes that generates many modern pharmaceuticals and insecticides.

Transforming traditional knowledge into modern drugs is nothing new. Youyou Tu, co-winner of this year’s Nobel prize for medicine, developed malaria therapies from herbal traditions rooted in the discoveries of a 4th-century Chinese alchemist.

But unlike Chinese traditions, Aboriginal medicinal insights were never written down.

“Our knowledge was all passed down by word of mouth,” Dr Ingrey says.

That knowledge was passed down from Dr Ingrey’s great-grandmother who was born in an Aboriginal camp on La Perouse beach in the late 1800s.

“Most of the stuff for the study came from my grandmother. When I was talking to her about these plants, she would say which ones to use and which ones not to use.

“The plants were used for infected wounds, sore throats, upset stomachs, fungal infections. She’d say: ‘Use these plants for your study but keep these other ones to yourself’,” he says.

Dr Ingrey plans to apply for an Australian Research Council grant to continue the research.

In the meantime he teaches biology and maths to indigenous years 11 and 12 students at nearby Matraville Sports High School.

Some of them think they don’t have the talent to make it to uni, which couldn’t be further from the truth. They just need the right support.

“The knowledge of traditional medicine passed down from his elders played a significant in shaping the science for the study.

“Dr Ingrey’s research will no doubt help raise awareness about the significance and wisdom of Indigenous knowledge, and the ways in which it can further assist in the development of new science.”

This story was originally published in The Australian.