In less than a century since it was introduced to Australia, the South African beach daisy has drastically changed its appearance – a clear and unusual example of rapid evolution in plants, a new study led by UNSW scientists has shown. 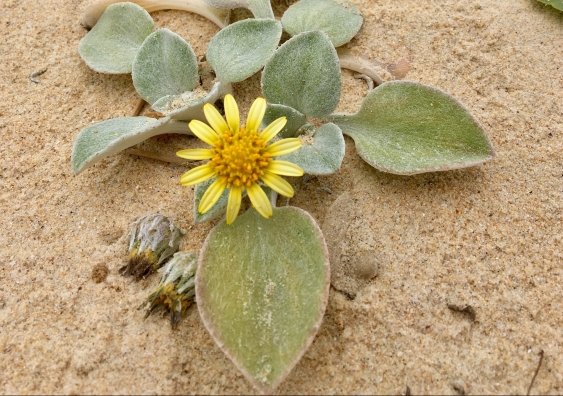 The beach daisy (Arctotheca populifolia) was introduced to Australian beaches in the 1930s. Image: Claire Brandenburger

A species of beach daisy from South Africa has undergone substantial and unexpected changes since arriving in Australia in the 1930s, a new study led by UNSW researchers has uncovered.

The findings published today in Proceedings of the Royal Society B present a significant example of rapid evolution in plants, showing how an introduced species can rapidly change in a new environment, away from its native habitat and herbivores.

Using genetics to go back to the beginning

The beach daisy (Arctotheca populifolia) was introduced to Australia from its native South Africa in a bid to prevent coastal sand dunes from eroding. It is now a common sight along sand dunes in Australia, with distinctive silvery woolly leaves and yellow flowers.

In an earlier study, the research team had already harvested beach daisy seeds along coastal regions in South Africa and Australia, and then generated genetic maps of each population.

They did this by locating shared microsatellites – short sequences of DNA that are repeated in multiple locations in the genome of an organism.

For the study released today, the researchers used genetics to figure out exactly which beach in South Africa the current Australian plants came from, drawing a direct genetic link between the original and introduced populations.

“It’s a key step that we got the parent population, because that is extremely rare and enables us to make the most precise evolutionary comparisons,” says Claire Brandenburger, lead author and PhD student at UNSW Sydney. 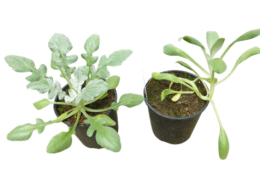 After less a century, the appearance of the introduced population of beach daisies in Australia (right) was drastically different compared to the original South African population (left). Photo: Claire Brandenburger

After establishing the genetic link, they then grew the plants over two generations to observe how the South African plants would grow in comparison to the Australian plants, all in controlled conditions in the glasshouse UNSW’s Sydney campus.

The results of the glasshouse experiments reveal that less than a hundred years since its arrival, the morphology of the beach daisy population in Australia is strikingly different compared with the parent population in South Africa.

Young plants from both South African and Australian beach daisy populations have leaves with a simple broad, rounded shape like a spade. When the plants reach adulthood, they start to look very different in South African beach daisy populations, with adult leaves developing distinctive lobes around the perimeter. But to the research team’s surprise, in the introduced population of Australian beach daisies, the plants didn’t develop their lobed adult leaf form and instead kept the young spade-like form.

This is a phenomenon known as ‘paedomorphosis’ – meaning ‘keeping its child-like form’ – where an organism keeps juvenile traits when it reaches adulthood.

“This study is a powerful approach of looking for changes and testing for theories – and so this is one of the reasons why we had such distinctive results,” Ms Brandenburger says.

“If a naturalist had seen these two plants 200 years ago, they would have probably described them as different species because they look so distinctive.

“We're not sure whether this is an adaptive change –  that is, whether the shape changed to adapt to the landscape – or genetic drift, where by chance the gene that says ‘become a lobed adult plant,’ might have been switched off in Australian plants.” 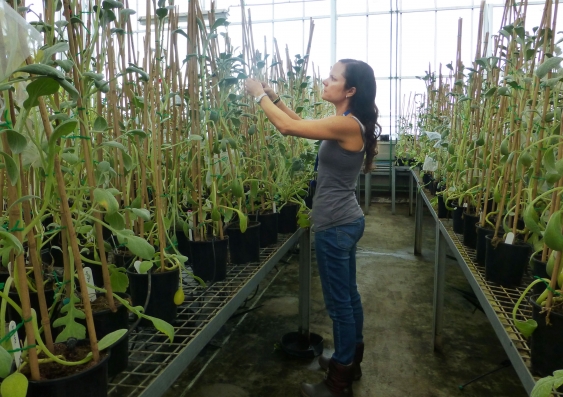 Against all evolutionary predictions

Usually, introduced plants would be predicted to follow the EICA (Evolution of Increased Competitive Ability) hypothesis.

“The EICA hypothesis offers an explanation for how introduced species can suddenly seem to be doing so well. When plants leave their original home, they leave a lot of enemies behind,” says Ms Brandenburger.

“When they arrive in a new environment, instead of wasting energy defending themselves, they now have extra resources which they can put into growth, reproduction and competition – usually resulting in bigger leaves and taller plants.”

However, against the prediction of the research team and the EICA theory, the Australian beach daisy population was revealed to be more conservative with a low and spreading growth form and smaller, thicker leaves similar to succulents – consistent with adaptation to a drier climate. This was despite rainfall being 2-3 times higher in the Australian study sites, compared to the South African one.

The authors say the study is a starting point and they need to go further to see if the change in appearances is associated with any evolutionary advantages.

“We need more research to find out why this is happening. More evidence is coming out showing that when there is a selective pressure in place, plants and animals can change really, really fast,” says co-author Professor Angela Moles.

The plant’s level of change in under a century shows how species can become invasive.

“This plant has massively changed in less than a century. This means they are evolving to get better at growing in Australia, which means they may get more invasive as time goes on,” says Professor Moles.

The study also shows that we shouldn’t underestimate the adaptability of plants to rapidly changing conditions, such as climate change.

With climate change, plants aren’t usually able to migrate like animals that move in search of more favourable conditions.

“We’re worried about native plant species changing in response to climate change, but this study might actually offer a little line of hope that maybe if there is a big selective pressure that some plant species will be better able to respond to it than we thought,” says Professor Moles.

“People often assume that with climate change plants are doomed. But we’re showing that hopefully plants in general will be able to adapt very quickly,” adds Ms Brandenburger.

“So maybe there is hope.”