A long-term UNSW Sydney study shows the impact of irrigation and development on the breeding of colonial waterbirds in Narran Lakes. 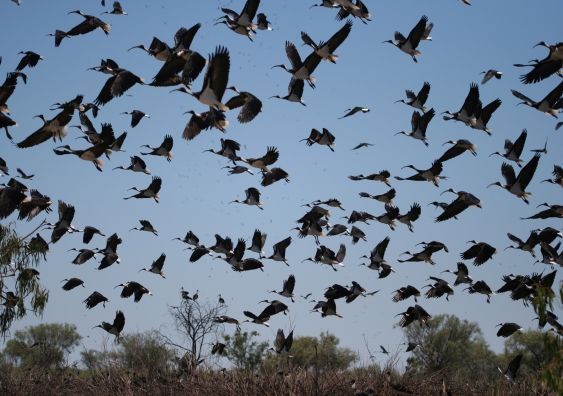 The periods of time when there is enough water in Narran Lakes for colonial waterbirds to breed has declined from one in four years in the 1970s to one in 11 years now, due to rapid development upstream, a long-term UNSW Sydney study shows.

Narran Lakes on the lower Balonne River floodplain in the Murray-Darling Basin was listed as a wetland of international importance under the Ramsar Convention in 1999, primarily due to its significance as a breeding site for colonial waterbirds, including straw-necked ibis, glossy ibis and Australian white ibis.

However, the lakes and its associated Lower Balonne floodplain are dependent on river flows from the Condamine and Balonne Rivers. These flows have been significantly reduced due to rapid development of these rivers, mostly since the 1990s, and the establishment of large irrigation areas such as Cubbie Station in their catchment in Queensland.

In the new study, published in the international peer-reviewed journal Biological Conservation, the UNSW scientists examined changes to the system over a period of more than four decades, from 1970 to 2016, and tracked the impact of this water resource development on the breeding of colonial waterbirds.

“The major problem is that colonial waterbird species primarily breed only when large floods provide enough water under their nesting habitat, as well as large areas for feeding,” says study lead author Dr Kate Brandis, a research fellow at the UNSW Centre for Ecosystem Science.

The research showed that colonial waterbirds only breed when large floods exceed thresholds of more than 154,000ML over a 90 day period, with a secondary threshold of more than 20,000ML in the first 10 days.

“This has meant that the frequency of breeding has declined from 1 in 4.2 years to 1 in 11.4 years – a reduction of 170%,” says study co-author and Centre Director, Professor Richard Kingsford.

“This is also probably a conservative estimate, because we depended on flow data which did not adequately capture all diversions of water upstream.”

The team also estimated the effects of the Murray-Darling Basin Plan. Restoration efforts by government to recover water for the environment was predicted to slightly improve colonial waterbird breeding frequency associated with large flow events to 1 in 6.71 years.

“However, the frequency of large floods will still be reduced by 59%, compared to no-development at all,” says Dr Brandis.

Professor Kingsford says this situation does not adequately meet Australia’s obligations for the management of the Ramsar-listed site. “It will likely require governments to notify the international community of this degradation,” he says.

“Recent decisions to further reduce environmental flows under the Murray-Darling Basin Plan will only exacerbate these long term impacts. These changes will also affect other waterbirds, plants and animals as well as significant cultural sites.”

Narran Lakes is one of 16 internationally important wetlands in the Murray-Darling Basin.