I did not set out to be an advocate for keeping native animals as pets, but raising a western quoll, quite simply, changed my life, writes Michael Archer. 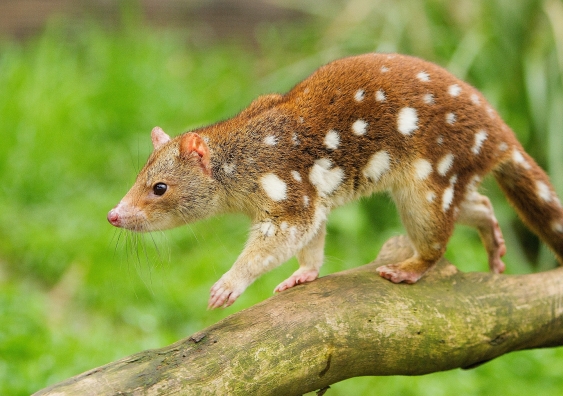 OPINION: I did not set out to be an advocate for native animals as pets — it just happened. As a lover of all animals and PhD student in the late 1960s focused carnivorous marsupials, a friend offered me the chance to raise at home a laboratory-bred baby western quoll (Dasyurus geoffroii). The experience quite simply changed my life.

He was obsessively clean, never failing to use a box of kitty litter for all excretions, dog-like in his love of play throughout his life. Bright and quick to learn, far more affectionate and attentive than a cat, intently curious, happy to play on his own but clearly happier to play with me, active particularly in the late afternoons and evenings and asleep at more or less the same times as me, puppy-like when playing even as an adult, careful to mouth without biting, content to fall asleep in my lap, generally very quiet with only 'purring', clicks or 'nark!' sounds rather than yowls or barks, no 'spraying' or other stinky habits, and generally fascinating.

When I moved to Brisbane I let him out into the backyard, as one would a dog or cat, and he freely came in and out of the house. Sadly, on the second evening, he mouthed an introduced cane toad and died in my arms 20 minutes later from bufotoxins, at the middling age of five.

That tragic loss of my special spotted friend was just the beginning for me of many years raising and interacting with a wide range of native mammals in domestic situations. While not all proved as suitable for flats or houses as that quoll, most proved to be very affectionate, interactive and highly tractable — often as or more rewarding as companions than dogs and far more so than cats, although I allow that for some people, an attentive pet is not what they want.

These are social species that rapidly bond across species boundaries with instinctive behaviours, such as head-rubbing in gliders, which in natural populations establishes and reinforces social cohesion within family units. They declared, in head-rubbing the back of my neck, that they enthusiastically accepted me as a member of their immediate family even though I must have seemed a rather ugly possum.

The fact that cats, dogs, mice, rats, rabbits, ferrets, chickens and a host of other introduced species are defended as the only appropriate companions for humans reflects an arrogance that ignores the geographic accidents of history. If colonial humans had evolved first in and spread from Australia rather than Africa/Eurasia, I have little doubt that views about appropriate animal companions would be very different than those we now inflict on Australia.

How many species now extinct in Australia might still be with us if we had taken them in as companions? I cannot help but wonder whether the Thylacine (Thylacinus cynocephalus) would now be extinct if early settlers in Tasmania had made a serious effort to keep this magnificent animal as a domestic companion instead of just dogs.

While some would argue that if a species survives only in captivity, it is effectively extinct, I think this is an absurd view and one most unlikely to be shared by the species themselves. As self-determined custodians of Earth's biodiversity, we have a moral as well as a selfish responsibility to minimise the loss of that biodiversity. The more thriving colonies there are of any creature, animal or plant, captive or wild, the less likely that creature is to disappear.

I worry too that our kids are losing interest in the importance of Australia's native animals — and plants for that matter. Before and during colonial times, children were surrounded by native creatures. Story-tellers wrote uniquely Australian yarns with them as the main characters and in many ways, our lives depended on them — so we valued them.

Mike Archer with his pet quoll in the 1960s

That was then. Some years ago, I asked children between 5 and 10 years old in a large Sydney shopping centre on a Saturday morning to name ten animals. Of the 40 who responded, 85 per cent failed to mention a single native animal. They were bristling with cats, dogs, elephants, zebras and lions. The kind they either lived with, saw on television, read about in books, or stared at in the zoo.

Our children, the generation we expect to maintain a focus on conservation, may be losing awareness that distinctive Australian creatures exist and, if that awareness declines, so inevitably will the sense of value or concern for their future. If live native animals are not allowed to come close enough to capture the hearts of children, children will be less likely to allow them space in their hearts. Having native animals as companions would go a long way to committing Australian children to their novelty and need for conservation.

Furthermore, 'pets as usual' is not contributing in any way to conservation of our native animals. Quite the contrary; if it remains unchanged, it will lead to further loses of native species and continuing degradation of the bush. Dogs and cats are constantly escaping or being released into the bush with predictable consequences — massive numbers of consumed native animals being turned into more feral cats and dogs and the risk of the lethal cat-disease toxoplasmosis being communicated.

Add these issues together, and it seems to me more than enough reason to seriously examine the potential conservation benefits of keeping native animals as companions.

What form could the native animals as companions initiative take? If suitable native animals are bred in disease-free colonies, they could be sold for a substantial price with part of the money going to traditional conservation projects focused on the welfare of the same and other species in the bush.

Senator Leyonhjelm's suggestion has merit and reflects a viewpoint I've been promoting for many years. I would encourage all Australians to consider that the future of at least some of our native species could benefit from having a place curled up on the couch as well as a secure home in the bush.

Michael Archer is Professor of Biological, Earth and Environmental Sciences at UNSW.

This opinion piece was first published on the ABC Environment website.

Things that go bang: 7 tips on helping your pet cope this storm and firework season