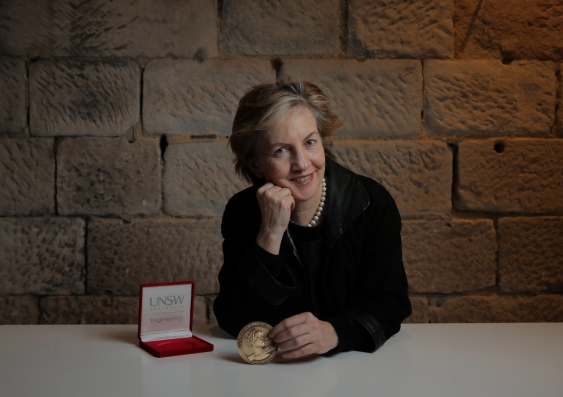 The inaugural Ada Lovelace Medal for an Outstanding Woman Engineer, a new national award, has been won by Mary O’Kane, the NSW Chief Scientist & Engineer.

“Mary O’Kane has made an outstanding and lasting contribution to Australia through her intellect, tenacity and commitment, and through numerous and diverse roles over the past 30 years,” said Mark Hoffman, Dean of Faculty of Engineering at the University of New South Wales (UNSW), which created the award.

“She has been involved in many fields: from her original specialisation of speech recognition and artificial intelligence, to stimulating Australian innovation, national energy policy, higher education, international development, computing and the fostering of young women and early career researchers,” he added. “Her career shows what a vital contribution women can make to engineering, and to the nation, and we hope many more women will be inspired by her example.”

Richard Sheldrake, a former Director-General of the NSW Department of Primary Industries and one of the O’Kane’s nominators, said her “contributions have not only benefited the people of Australia, but also people in communities throughout the world. She is a remarkable Australian, and a truly worthy recipient of the Ada Lovelace Medal for an Outstanding Woman Engineer.”

The 80 mm by 4 mm medal is antique gold plated on a cast zinc-alloy base and its design is modelled on Olympic medals. Weighing 140 g, it has a 3D engraved depiction of Ada Lovelace on one side and the Faculty of Engineering’s logo on the other. 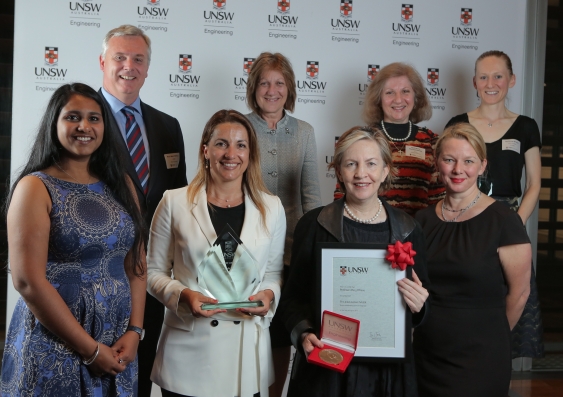 Winners of the UNSW Women in Engineering Awards, held at The Mint in Sydney. In the foreground, Athena Venios (in white) and Mary O’Kane (holding medal).

The medal was presented at the annual UNSW Women in Engineering Awards reception held at The Mint, the elegant colonnaded coining factory that is central Sydney’s oldest public building.

Two other awards were the Judy Raper Award for Leadership, won by Athena Venios, Technical and Group Director at the engineering firm AECOM; and the Maria Skyllas-Kazacos Young Professional Award For Outstanding Achievement, won by Monique Alfris, co-founder and director of Pollinate Energy.

Athena Venios has worked on major projects in water and transport, holding leadership roles in transport and infrastructure programs for major sporting events, including the Sydney and Athens Olympic Games, the Melbourne Commonwealth Games and the Melbourne Grand Prix. She founded and chaired the KBR Women’s Professional Engagement group and has been vice-chair of Engineers Australia’s Women in Engineering Sydney Division. She holds a Bachelor’s degree in Civil Engineering from UNSW.

“Athena’s passion for excellence in engineering not only ensures that she excels in her work, but that she inspires all who come into contact with her,” said Alexandra Bannigan, Manager of the UNSW Women in Engineering program. 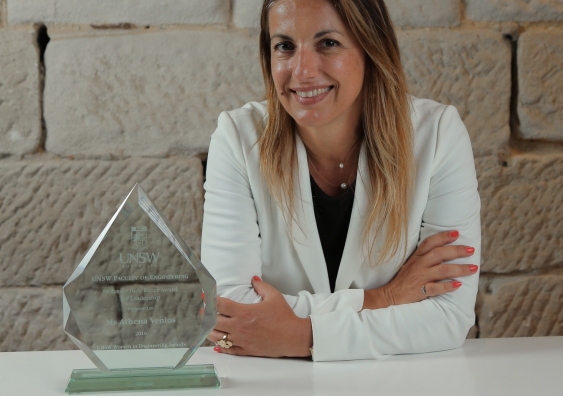 Athena Venios with the Judy Raper Award for Leadership.

Monique Alfris co-founded Pollinate Energy, an award-winning not-for-profit social enterprise founded in 2012 that provides access to affordable clean energy to improve the lives of poor people living in India’s urban slums. Previously she worked to develop micro-financing in several Asian countries, and in a number of green building consultancy roles in Africa and Australia. She has a Bachelor’s degree in Photovoltaics and Solar Energy Engineering from UNSW.

“Monique’s work at Pollinate Energy has improved the livelihood of almost 60,000 people through the distribution of technologies such as solar lights, cook-stoves and water filters,” said Darren Bagnall, Head of the School of Photovoltaic and Renewable Energy Engineering at UNSW, one of her nominators. “Her passion to make a positive difference is only matched by her passion for the profession of engineering.”​ 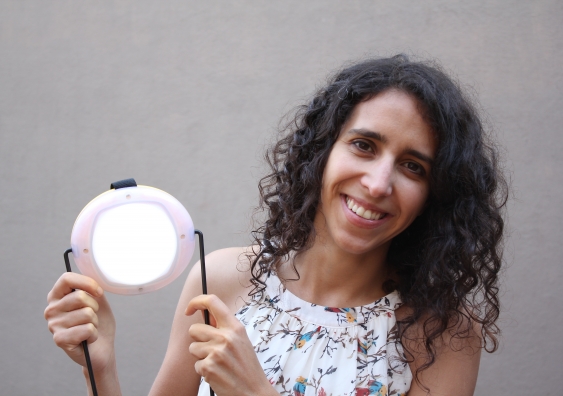 Mary O’Kane said she was honoured to be recognised. “In my role, I have the privilege to meet and work alongside many wonderful women engineers, and witness first-hand the contribution they make across a diverse range of disciplines – including Athena Venios and Monique Alfris, who’ve been recognised for their leadership and outstanding achievement in engineering.

“That is why I am particularly humbled to receive the inaugural Ada Lovelace Medal from UNSW – a university that has been an exemplar in appointing women engineers to senior leadership positions, and fostering the next generation of women engineers through its first-class courses.”

The annual awards are part of a concerted effort by UNSW’s Faculty of Engineering, the nation’s largest, to attract more women into engineering. It has more than tripled attendance at its annual Women in Engineering Camp. This year 100 bright young women in Years 11 and 12 came to UNSW from around Australia for a week to explore engineering as a career and visiting major companies like Google, Resmed and Sydney Water. It has also tripled the number of Women in Engineering scholarships to 15, together valued at $600,000.

UNSW also led the Made By Me initiative, in which eight top universities and Engineers Australia launched a song and music video by Australia’s twin-sister DJ duo NERVO to highlight engineering as an attractive career for young women.

Hoffman, who became Dean of Engineering in 2015, has set a goal to raise female representation among students, staff and researchers to 30% by 2020. Currently, 23% of first-year UNSW engineering students are female, up from 21% in 2015. This compares to the Australian average of 17%. In industry, only about 13% of engineers are female, a ratio that has been growing slowly for decades.

Inaugural Engineering Faculty Showcase delivers a vision for the future