Coral bleaching is the 'canary in the coal mine' and suggests the present rate of climate change is too fast for many species to adapt, write Katrin Meissner and Kaitlin Alexander. 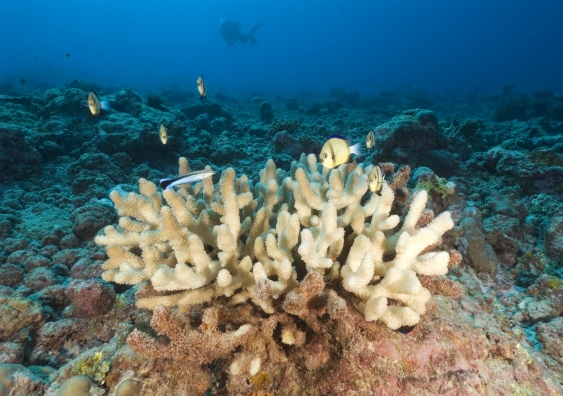 OPINION: We now know that greenhouse gases are rising faster than at any time since the demise of dinosaurs, and possibly even earlier. According to research published in Nature Geoscience this week, carbon dioxide (CO₂) is being added to the atmosphere at least ten times faster than during a major warming event about 50 million years ago.

We have emitted almost 600 billion tonnes of carbon since the beginning of the Industrial Revolution, and atmospheric CO₂ concentrations are now increasing at a rate of 3 parts per million (ppm) per year.

With increasing CO₂ levels, temperatures and ocean acidification also rise, and it is an open question how ecosystems are going to cope under such rapid change.

Coral reefs, our canary in the coal mine, suggest that the present rate of climate change is too fast for many species to adapt: the next widespread extinction event might have already started.

In the past, rapid increases in greenhouse gases have been associated with mass extinctions. It is therefore important to understand how unusual the current rate of atmospheric CO₂ increase is with respect to past climate variability.

Into the ice ages

There is no doubt that atmospheric CO₂ concentrations and global temperatures have changed in the past.

Ice sheets, for example, are reliable book-keepers of ancient climate and can give us an insight into climate conditions long before the thermometer was invented. By drilling holes into ice sheets we can retrieve ice cores and analyse the accumulation of ancient snow, layer upon layer.

These ice cores not only record atmospheric temperatures through time, they also contain frozen bubbles that provide us with small samples of ancient air. Our longest ice core extends more than 800,000 years into the past.

During this time, the Earth oscillated between cold ice ages and warm “interglacials”. To move from an ice age to an interglacial, you need to increase CO₂ by roughly 100 ppm. This increase repeatedly melted several kilometre-thick ice sheets that covered the locations of modern cities like Toronto, Boston, Chicago or Montreal.

With increasing CO₂ levels at the end of the last ice age, temperatures increased too. Some ecosystems could not keep up with the rate of change, resulting in several megafaunal extinctions, although human impacts were almost certainly part of the story.

Nevertheless, the rate of change in CO₂ over the past million years was tame when compared to today. The highest recorded rate of change before the Industrial Revolution is less than 0.15 ppm per year, just one-twentieth of what we are experiencing today.

To find an analogue for present-day climate change, we therefore have to look further back, to a time when ice sheets were small or did not exist at all. Several abrupt warming events occurred between 56 million and 52 million years ago. These events were characterised by a rapid increase in temperature and ocean acidification.

The most prominent of these events was the Palaeocene Eocene Thermal Maximum (PETM). This event resulted in one of the largest known extinctions of life forms in the deep ocean. Atmospheric temperatures increased by 5-8C within a few thousand years.

Reconstructions of the amount of carbon added to the atmosphere during this event vary between 2000-10,000 billion tonnes of carbon.

The new research, led by Professor Richard Zeebe of the University of Hawaii, analysed ocean sediments to quantify the lag between warming and changes in the carbon cycle during the PETM.

Although climate archives become less certain the further we look back, the authors found that the carbon release must have been below 1.1 billion tonnes of carbon per year. That is about one-tenth of the rate of today’s carbon emissions from human activities such as burning fossil fuels.

What happens when the brakes are off?

Although the PETM resulted in one of the largest known deep sea extinctions, it is a small event when compared to the five major extinctions in the past.

The Permian-Triassic Boundary extinction, nicknamed “The Great Dying”, wiped out 90% of marine species and 70% of land vertebrate families 250 million years ago. Like its four brothers, this extinction event happened a very long time ago. Climate archives going that far back lack the resolution needed to reliably reconstruct rates of change.

There is, however, evidence for extensive volcanic activity during the Great Dying, which would have led to a release of CO₂ as well as the potential release of methane along continental margins. Ocean acidification caused by high atmospheric CO₂ concentrations and acid rain have been put forward as potential killer mechanisms.

Other hypotheses include reduced oxygen in the ocean due to global warming or escape of hydrogen sulfide, which would have caused both direct poisoning and damage to the ozone layer.

These past warming events occurred without human influence. They point to the existence of positive feedbacks within the climate system that have the power to escalate warming dramatically. The thresholds to trigger these feedbacks are hard to predict and their impacts are hard to quantify.

Some examples of feedbacks include the melting of permafrost, the release of methane hydrates from ocean sediments, changes in the ocean carbon cycle, and changes in peatlands and wetlands. All of these processes have the potential to quickly add more greenhouse gases to the atmosphere.

Today’s rate of change in atmospheric CO₂ is unprecedented in climate archives. It outpaces the carbon release during the most extreme abrupt warming events in the past 66 million years by at least an order of magnitude.

We are therefore unable to rely upon past records to predict if and how our ecosystems will be able to adapt. We know, however, that mass extinctions have occurred in the past and that these extinctions, at least in the case of the PETM, were triggered by much smaller rates of change.

How will climate change affect hailstorms?