The Milky Way is not low-fat: new study reveals facts about grease in space

The galaxy is rich in grease-like molecules, according to an Australian-Turkish team. 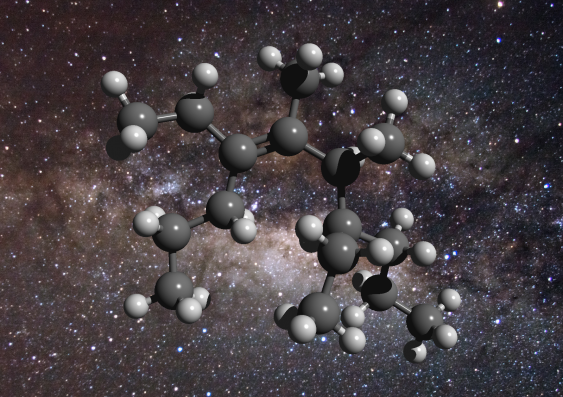 An illustration of the structure of a greasy carbon molecule, set against an image of the galactic centre, where this material has been detected. Carbon is represented as grey spheres and hydrogen as white spheres. Credit: D. Young (2011), The Galactic Center. Flickr – CreativeCommons

Astronomers at UNSW Sydney and Ege University in Turkey used a laboratory to manufacture material with the same properties as interstellar dust, and used their results to estimate the amount of ‘space grease’ found in the Milky Way. Their results appear in a paper in Monthly Notices of the Royal Astronomical Society.

Organic matter of different kinds contains carbon, an element considered essential for life. However, there is real uncertainty over its abundance, and only half the carbon expected is found between the stars in its pure form. The rest is chemically bound in two main forms, grease-like (aliphatic) and mothball-like (aromatic).

The UNSW / Ege team mimicked the process by which organic molecules are synthesised in the outflows of carbon stars, by expanding a carbon-containing plasma into a vacuum at low temperature. The material was collected and then analysed by a combination of techniques. Using magnetic resonance and spectroscopy (splitting light into its constituent wavelengths) they were able to determine how strongly the material absorbed light with a certain infrared wavelength, a marker for aliphatic carbon.

“Combining our lab results with observations from astronomical observatories allows us to measure the amount of aliphatic carbon between us and the stars,” explained Professor Tim Schmidt, from the Australian Research Council Centre of Excellence in Exciton Science in the School of Chemistry at UNSW.

Schmidt is quick to dispel the comparison with anything edible: “This space grease is not the kind of thing you’d want to spread on a slice of toast! It’s dirty, likely toxic and only forms in the environment of interstellar space (and our laboratory). It’s also intriguing that organic material of this kind – material that gets incorporated into planetary systems – is so abundant.”

The team now wants to determine the abundance of the mothball-like carbon, which will involve yet more challenging work in the laboratory. By firmly establishing the amount of each type of carbon in the dust, they will know precisely how much of this element is available to create life.