Why the race to rescue the Mountain Pygmy-possum from extinction has spurred conservationists at home and abroad into action. 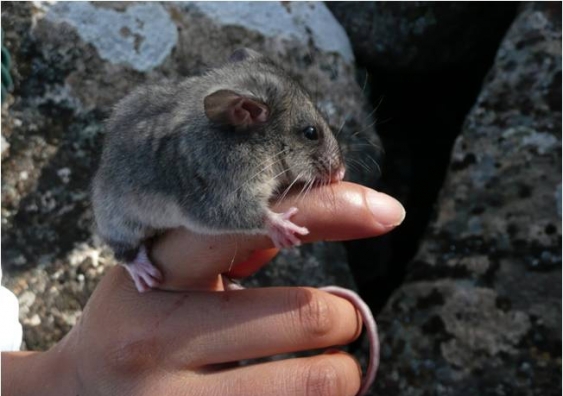 The Burramys Project received $190,000 from the Prague Zoo that will contribute to building a breeding facility in Lithgow. Photo: Hayley Bates

The critically endangered Mountain Pygmy-possum (Burramys parvus) has been thrown a lifeline from an unexpected quarter after the Czech Republic’s Prague Zoo committed $190,000 towards the building of a breeding facility in Lithgow, NSW.

Miroslav Bobek, Director of the Prague Zoo, says the donation was partly motivated by the bushfires that ravaged Australia in the 2019-20 summer.

“When devastating bushfires peaked in Australia at the beginning of 2020, we set up a public fundraising at the Prague Zoo,” Mr Bobek says.

“The Czech public's interest in supporting the conservation of Australian wildlife was incredible. We soon raised over a million AUD which enabled us to help support endangered species in Australia and we did not want to miss the Mountain Pygmy-possum which was also threatened by climate change.

“When we learned about the innovative Burramys Project, we did not hesitate to support construction of a breeding facility in Secret Creek Sanctuary.”

With building now underway and expected to be completed by spring, the breeding facility at Secret Creek Sanctuary aims to produce a large, healthy population of Mountain Pygmy-possums. Scientists and conservationists involved in the project plan to release captive-bred possums into lowland wet forests after acclimatising them to the local conditions, the foods and other species they will encounter in their new homes. 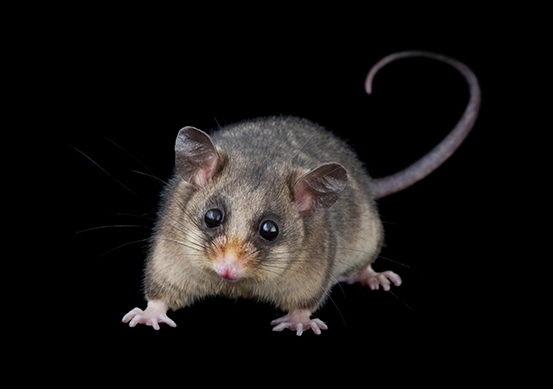 Pygmy Mountain-possums will soon be bred and acclimatised to conditions in Lithgow with a view to releasing them into a temperate lowland environment. Photo: Joel Sartore

Possum out of place

Professor Mike Archer, a leading palaeontologist who has unearthed many of Australia’s diverse and often bizarre prehistoric animals – most notably from the Riversleigh World Heritage Area deposits in northwestern Queensland– was the first to spot that Burramys parvus was probably a possum out of place. 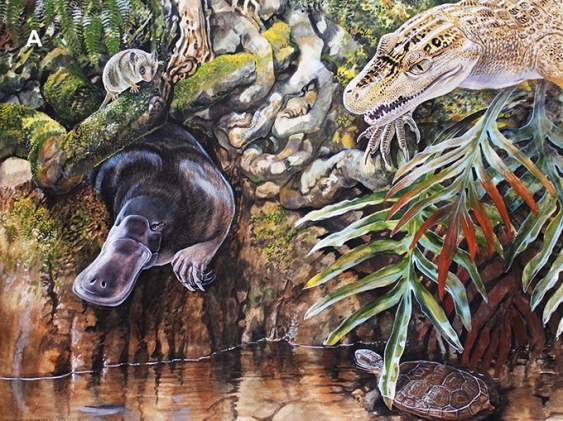 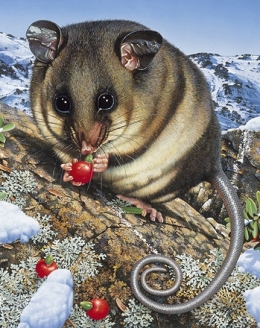 Research shows that the preferred habitat for possums in the Burramys group has always been cool, lowland wet rainforest in contrast to the alpine habitat where they just manage to survive today. Image reproduced courtesy of Ego Guiotto/Australian Geographic

“It was when we saw ancestors with a direct line to today’s Burramys turn up in the fossil record in the most surprising places like Riversleigh, the Tirari Desert in South Australia and Hamilton in north-western Victoria that we first had the idea that these creatures had become marooned in a rapidly-changing environment that was quite different and more challenging than the one in which they and their ancestors had first evolved,” Prof. Archer says.

“Our research showed that in the past, the preferred habitat for possums in this group has always been cool, lowland wet rainforest in contrast to the temperature-extreme, alpine habitat where today they just manage to survive.”

Research colleague Dr Hayley Bates, whose PhD was focused on understanding how these possums managed to just survive in the alpine habitat today, says Mountain Pygmy-possums have to escape the freezing temperatures of winter by hibernating in rock piles using the snow cover as insulation.

“In the summer, these rock piles also protect them from dangerously high temperatures – anything above 28oC could be fatal,” she says.

“But as temperatures slowly rise due to climate change, snow has begun to melt much earlier in the season. With the layer of insulation gone, air that is only just above 0oC penetrates the rock piles and wakes the possums from their hibernation, putting them at much greater risk of freezing or starving to death. 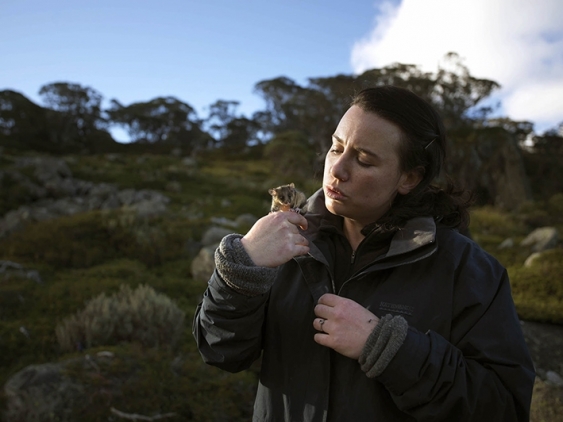 Current estimates suggest there are only 1500 Mountain Pygmy-possums left in New South Wales and Victoria, with numbers fluctuating depending on the severity of weather conditions from one year to the next, Prof. Archer says.

“Two mild winters in a row with reduced snowfalls could be all that’s required to cause extinction of this species.”

Rather than watch helplessly as the Mountain Pygmy-possums struggle to survive climate extremes in ever-diminishing numbers, researchers from UNSW Sydney have teamed up with others from University of Sydney, University of New England, the NSW National Parks Foundation, the Department of Primary Industries and Australian Ecosystems Foundation to set up this breeding colony in Lithgow.

The Burramys Project plan aims to do three things: increase the possum numbers via captive breeding, provide opportunities for researchers to study their behaviour, and conduct monitored trial releases into areas of lowland wet forests of the kind where their ancestors had thrived.

“Prague Zoo’s welcome contribution, adding to the initial $130,000 raised by the Australian Geographic Society as well as funds generously provided by other donors such as the Australian Wildlife Society, will enable us to build much better facilities including two enclosures where the possums can be studied,” says Trevor Evans, owner of Secret Creek Sanctuary and Secretary of Australian Ecosystems Foundation, which contributed a further $130,000 to the project. 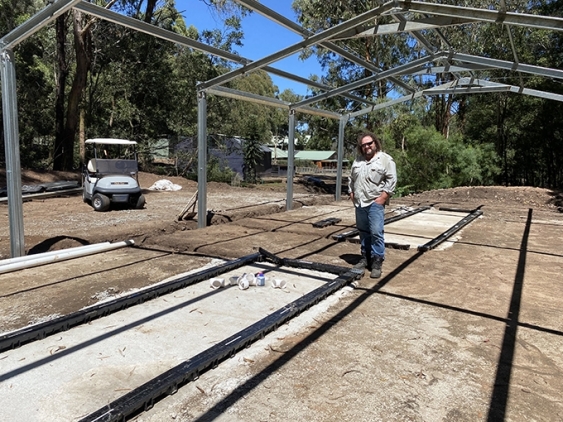 “One of these will house a much larger number of Mountain Pygmy-possums than we are able to house now, while in the other we will genetically select pairs for breeding in specially designed nest-boxes.”

“Accelerating climate change demands innovative approaches to the conservation of at-risk species like the Mountain Pygmy-possum which is why this Society will continue its long-term support of the Burramys Project in any way we can.”

UNSW Knowledge Exchange Director, Warwick Dawson, who with Prof. Archer signed a partnership agreement with Prague Zoo, says getting a program like this off the ground requires funds as well as friends.

“It’s heartening to know that the plight of a tiny marsupial struggling to survive can attract financial support from the other side of the world thanks to our friends at the Prague Zoo,” Mr Dawson says.

“Through their help, together with funds raised by our local friends including UNSW donor, the late Gary Johnston, we now have the best chance yet to save one of Australia’s most beguiling marsupials. It would be a tragedy if this creature became a casualty of climate change after 25 million years of history on this continent.

“This is an excellent example of the translation of UNSW expertise and knowledge into profound environmental impact.”