As the 2018 FIFA World Cup kicks off in Russia, the UNSW Sydney robot soccer team is preparing for competition in Canada. 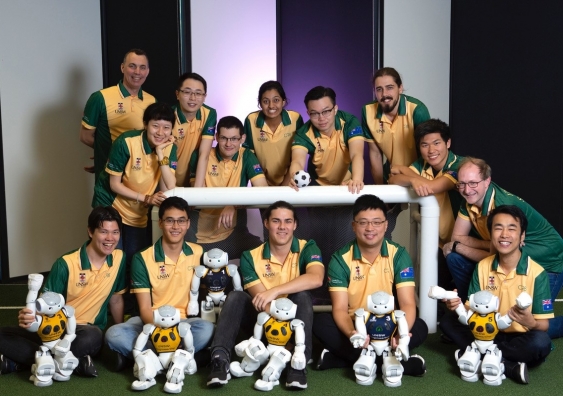 Members of the 2018 UNSW Sydney RoboCup team that will be competing in Robot Soccer World Championship in Montreal, Canada.

As the Socceroos take to the field for the World Cup, the UNSW robot soccer team is looking to regain the World Champion title at the RoboCup 2018 competition kicking off in Montreal, Canada.

The world’s best teams of robots will be battling it out for global football supremacy at the event, which begins on Monday.

Australia’s five-time world champion of robot soccer, UNSW’s ‘rUNSWift’ team, which last took out the world title in 2014 and 2015, was knocked out early in the 2016 competition and last year made it to the quarter finals.

This year, members of the UNSW team want to regain their champion's crown, but are up against the six-time title winner, the ‘B-Human’ team from the University of Bremen, Germany, which won the title last year and is the form team to beat.

“B-Human from Germany has almost always made the finals and are expected to do well again this year, but we are well prepared and quietly confident we can win through,” said UNSW team spokesperson Timothy Wiley, Research Associate, School of Computer Science and Engineering (CSE).

In this standard-platform soccer league at RoboCup, teams use the same hardware, a Nao humanoid robot from SoftBank. This league plays five-a-side soccer on a six-metre by nine-metre field. UNSW has participated with the Nao robots since 2008.  All robots in this league are fully autonomous.

“Every team uses a standard platform and is required to use the same robot hardware. The competition is centred around creating the best software. In CSE, we choose to participate in standard-platform leagues as we are a school focused on software engineering, and we do not focus on building the hardware for robots,” Tim said.

The ‘home’ league focuses on presenting challenges for domestic service robots in a simulated home (usually with a lounge, dinning, kitchen and bedroom). CSE has been given a HSR on a three-year research loan to develop software in conjunction with Toyota. UNSW first participated in this competition in 2017 and placed a very respectable 8th overall.

Professor Mark Hoffman, UNSW’s Dean of Engineering, wished the teams well in their quest for robotic supremacy, noting: “The RoboCup competition takes place at the same time as the 2018 FIFA World Cup is underway. Our students’ supremacy in software development and innovation has resulted in incredible success for Australia in these robotic games in previous tournaments, beating Germany to win four years ago. Wouldn’t it be great if we won on both pitches in 2018.”

Tim said: “We believe that we are in a good position to improve on our performances in both the Soccer SPL and @Home DSPL from 2017 this year. We have been preparing for this competition all year and so have put in a lot of work and planning.”

UNSW will be hosting the 2019 RoboCup in Sydney in late June at the ICC Darling Harbour. Professor Sammut is the General Local Chair for 2019 RoboCup.

Photos and video of the teams are available via the links and media contact.

Taller, faster, better, stronger. Wind towers are only getting bigger