Opinion Need help with that delivery? Call the monkey midwife!

With few exceptions, humans require assistance at birth, usually from an experienced elder, midwife or medical practitioner, and it seems assisted birth is also common among other primates, writes Darren Curnoe. 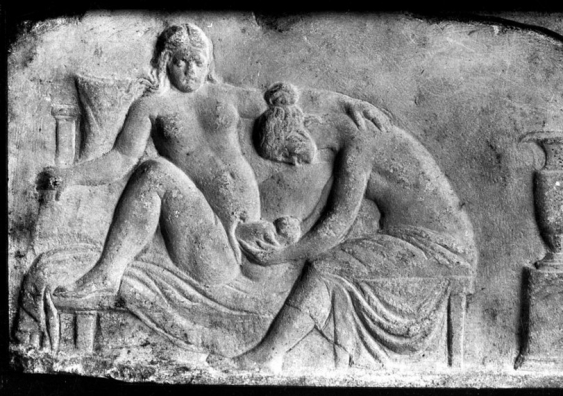 OPINION: When I think back to the traumatic birth of my own daughter - and how I would have lost her and my partner if it hadn’t been for some swift medical intervention - I can’t help but wonder how the heck we’ve grown to be so numerous as a species.

It’s fascinating to reflect on how our large population makes us unique among the primates. But also, how this seems to have occurred despite our complicated reproductive setup.

There’s an estimated 7.3 billion members of Homo sapiens at the moment; no one knows for sure how many.

What about during the Palaeolithic? The first 95 percent of our evolutionary history?

Scientists have taken a few interesting approaches to this question, but they’ve provided us with starkly different answers. Still, they do give us some broad ideas to work with and highlight some trends.

Estimates of population size based on the archaeological record link the number (or density) of sites to the size of the population that occupied or made them.

In Europe, for example, using this approach, it’s estimated that between roughly 4 thousand and 40 thousand people were alive during the Upper Palaeolithic.

Their numbers fluctuated depending upon the climate - with numbers crashing during the extreme cold of 20 thousand years ago - and increasing with technological innovations that made people more efficient foragers, after this time.

Another approach has been to estimate the ‘effective population’ size - or number of individuals contributing genes to the next generation - from genetic data.

Using maternally inherited (mitochondrial) DNA, estimates of the global human breeding population are 10-20 thousand people up until about 50 thousand years ago; averaging out to be more or less constant over time.

At 50 thousand years ago, the human population seems to have exploded outside of sub-Saharan Africa, growing more or less exponentially from that time onwards, with a further acceleration from the Neolithic (agricutlural) Revolution on.

In Europe over the same period, the effective population may have started off at around 30 thousand people. It then grew perhaps ten-fold over the next 30 thousand years, so that by the end of the Ice Age - roughly 12 thousand years ago - there were close to 300 thousand reproductively active individuals.

How many people were there in total for our species during the Palaeolithic? The so-called ‘census population’?

If we assume that about half the population was of reproductive age - which is close to the effective population for recent hunter-gatherers - then the global human population was perhaps between 20 thousand to 40 thousand at any one time for the first 150 thousand years of our existence as a species.

By 40-50 thousand years ago we had settled Asia, Australia and Europe, and our population grew to closer to half a million people.

How many people were living in Europe towards the end of the Palaeolithic? There may have been around 200 thousand people there, a value roughly an good order of magnitude larger than that estimated by archaeologists.

Each year across the globe, around 209-250 women die per 100,000 live births, according to the World Health Organisation.

Thankfully, maternal death rates have improved by 44 percent over the last 25 years, but there’s still a long way to go, with 99 percent of all deaths occurring in developing countries.

These estimates all come from a time well after European contact and the introduction of infectious diseases. So, it’s impossible to know how representative they are of maternal mortality rates in the past.

Human birth would seem then to be a remarkably risky activity, both to mother and child. Why is this the case?

One long held view in anthropology - know as the ‘obstetrical dilemna’ - is that birth is particularly difficult compared to other primates because the shape of the human pelvis represents a compromise between our two-footed locomotion and the need to give birth to large brained babies.

The human pelvis is shorter (top to bottom) compared to other apes in order to increase stability and efficiently transfer body weight from the upper body to lower limb when we walk.

The result is a much narrow pelvic outlet and a greatly constricted birth canal.

On top of this, the adult human brain is about three times the size of our close cousins, the chimpanzee, while our brain size at birth is about the same as an adult chimpanzee’s.

Unlike in other apes then, there isn’t much space in the human birth canal, making delivery a uniquely challenging situation.

What all this means is that human birth involves a set of movements or turns of the fetal head that don’t occur in other primates: first of all, the head normally and unusually starts in an oblique position compared with the maternal pelvic inlet; it must then rotate as it passes into the mid-pelvic plane; and finally, as it passes into the pelvic outlet, with the back of the head facing outwards, the fetal head must rotate again, sideways, for a safe delivery.

Today, among the leading causes of maternal death, excepting unsafe abortions, three of them relate to complications during pregnancy or birth: severe bleeding, high blood pressure (pre-eclampsia and eclampsia) and complications from delivery.

With few exceptions, humans require assistance at birth, usually from an experienced elder, midwife or medical practitioner, so as to reduce the risks of these occurring and ensure safe passage through the birth canal.

Few societies engage in the risky enterprise of solo child birth: the !Kung hunter-gatherers of the Kalahari, who prefer this option, being historically a notable exception.

But is this practice unique to humans, as we have been led to believe by anthropologists for many decades? Short answer, no.

Birth in the wild, and especially during daylight hours, is a rare occurrence for non-human primates. This has made it difficult for scientists to observe birth in wild populations.

However, new research on the birthing behaviour of the Sichuan snub nosed monkey, seen for the first time in the daylight, has added weight to the idea that assisted birth might be quite common among primates.

A team of researchers led by Bin Yang from the Shaanxi Academy of Sciences and published in the journal Primates has witnessed for the first time birthing in the wild, during daylight hours, by this monkey.

What’s more, the birth was assisted by another adult female in the troop.

In fact, it turns out that of the ten primate species that have had wild, daytime, births witnessed by scientists, no less than six of them had assisted births.

There is even a recently published report for such practice in the bonobo, or pygmy chimpanzee, one of our closest cousins.

Question is, why do other primates engage in assisted delivery? Especially given that they don’t seem to need to. Or, perhaps, they sometimes do?

What we do know, of course, is that unlike all other primates, such behaviour is fundamental for the safe delivery of human babies.

The other lesson we anthropologists might learn from agencies like the World Health Organisation is that, no matter how risky human birth is, the main causes of maternal death have been largely eliminated in the wealthy world through changed birthing (cultural) practices.

In other words, we have, yet again, found a way to largely circumvent our evolution: the obstetric dilemna being bypassed despite seemingly posing major risks to women in the past.

But, then again, may be we anthropologists have overstated the risks of childbirth during the Palaeolithic? Like today, maybe our very clever ancestors also found cultural solutions that successfully side stepped natural selection?

While we’ll probably never know, the fact that there’s so damned many of us today suggests they must have gotten an awful lot right in childbirth!

Darren Curnoe is an ARC Future Fellow and Director of the Earth and Sustainability Science Research Centre (ESSRC), UNSW.