A team from UNSW will be the only one representing Australia in the finals of Elon Musk’s Hyperloop Pod Competition 2019 after beating more than 2000 entrants. 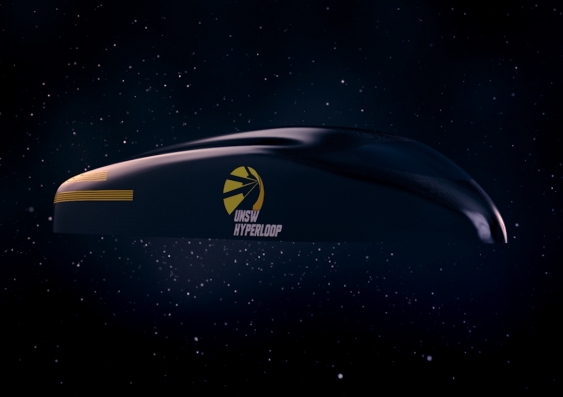 Some young engineering students from UNSW Sydney are hoping their designs for a high-speed Hyperloop pod will catapult them to the attention of Elon Musk.

Being the only team to represent Australia at the Hyperloop Pod Competition 2019 in California, the UNSW Hyperloop team – who refer to themselves as Loopers – will be pitting their engineering, design and technology skills against 19 of the most prestigious universities in the world.

The Hyperloop competition was conceptualised by Elon Musk in 2012 with a goal of innovating the future of high-speed travel. A subsidiary of Musk’s rocket development company SpaceX, Hyperloop envisions a future when people travel long distances through vacuum tubes in pressurised pods at speeds comparable to aircraft.

On July 21 this year, the prototype pods of 20 university teams will whoosh through a mile-long vacuum tube and will be judged on one criteria: maximum speed, which includes a successful deceleration to finish within 30m of the end of the tube.

“Hyperloop is basically a vacuum train where you hop in pods, and these would be shuttling you between major cities at the speed of sound,” he says. “So it has major implications for how we access work, how you think about travel and totally disrupts the [urban transport] supply chain.”

Zhang, who is a 4th year Aerospace Engineering student, says the UNSW team’s approach was quite unique in that the usual preparation time of about 18 months to design a pilot  was condensed into just six in a multi-elimination process against the world’s best universities.

“It was quite gruelling because we had to apply to compete, then do several design packages over the summer and then finally get accepted in February to be invited to go to SpaceX’s headquarters in Hawthorne, California.

“The people who do compete and make it through the multiple rounds of elimination are quite revered in engineering around the world.” 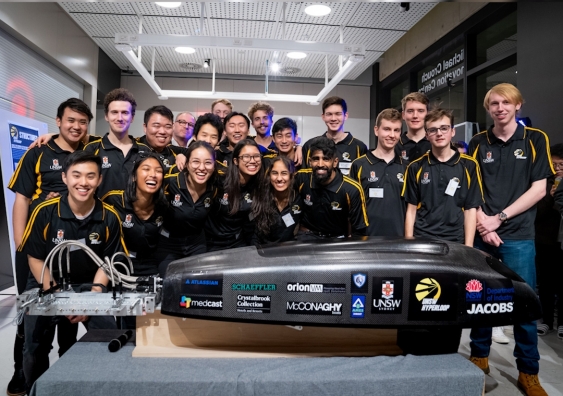 The UNSW Hyperloop team at the launch of their Hyperloop pod. Picture: Nyasha Nyakuengama, UNSW

One of these is the Technical University of Munich, the undefeated world champions in Hyperloop, who last year set a record of 467km per hour, or almost 0.4 mach.

Hyperloop technical manager Francis McDonald says the electrical components which are used to propel the pod on a cushion of air above a single track are mostly off-the-shelf, while the team is also reusing some of the technology behind UNSW’s record breaking sUNSWift solar car and “taking it a step further”.

“It’s such a simple idea, pretty much the best team is the one that goes fastest, but it’s also very complex, we’re dealing with vacuums so we have to seal all our systems and that’s very interesting to play around with.

“We’re trying to develop the most basic prototypes of it, just proving that it’s possible to move in a vacuum tube at absurd speeds.”

UNSW Hyperloop Structures Lead Yasmin Zaman has overseen the construction of the pod – connecting the internal machinery to the chassis which will then be encased in an aerodynamic shell.

“While we want this to be aerodynamic, it has to be also aesthetic and can conform to the regular engineering requirements that you would need for a Hyperloop pod.”

Zaman, who is a fifth year Aerospace Engineering student, sees the event as a great opportunity to apply skills learned as well as network with some of the planet’s brightest and most creative young minds in engineering.

“I’m definitely excited to meet a bunch of engineers from all over the world and be able to connect and see how their journeys at university have led them to this point where all of us are now at SpaceX headquarters, talking to each other and racing these pods.”