Neil deGrasse Tyson on life, the universe and chocolate biscuits

In a video interview, the famous American astrophysicist discusses time and asteroids, city life and selfies – and the latest discoveries about Tim Tams. 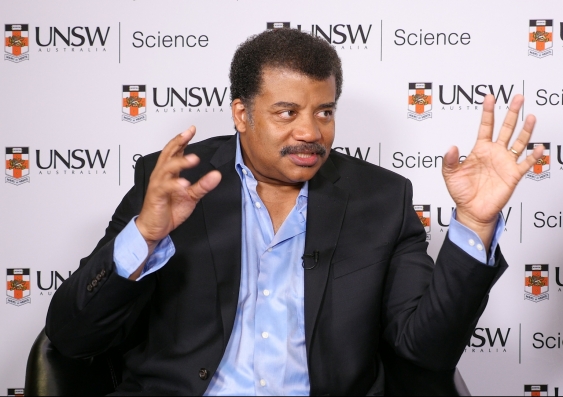 Time makes us all prisoners of the present; city life and selfies are preventing people from connecting with the cosmos; and humankind may be destined for extinction, like the dinosaurs before us, from an undetected asteroid heading our way.

In an exclusive video interview in Sydney with UNSW Science, Dr Neil Degrasse Tyson raises these issues and also scuppers any hope of conversing with intelligent life on planets outside our solar system for the forseeable future.

But he half-jokes that we’ll know we’ve found kindred souls if we detect pollution in the atmosphere of an exoplanet. “That would be the surest sign of the absence of intelligence in whoever is living there,” he says.

The famous American astrophysicist also discusses how he met his wife in a physics class on relativity, used to dance a mean Pasodoble, and has learnt to suck hot drinks through a Tim Tam biscuit while on tour in Australia.

His main message, however, is a more profound one.

“The universe is knowable, and that is an amazing thing,” he says. “One need not appeal to mystical, magical forces to account for things.  It is knowable by our feeble human brain that rose up out of the Serengeti.”

While human intelligence originally helped people avoid being eaten by wild animals on the plains of Africa, we have gone on to use it to “build a civilisation where we have sufficient free time so that we can contemplate our place in the universe,” says Dr Tyson.

The renowned science communicator and author, who is Director of the Hayden Planetarium in New York City, spoke to Don Kountouris before appearing at a sell-out Think Inc event in Sydney’s Hordern Pavilion this month.

The first time Dr Tyson saw the night sky properly at age nine on a visit to the planetarium, where the universe was displayed in all its glory inside a dark dome, he dismissed it as a hoax.

“It was like, No that’s not real. You guys are lying. I know what the night sky looks like. I’ve seen it from the Bronx in New York, where I grew up, and it’s got a dozen stars, not countless thousands.”

He says Australians have no excuse not to take a break from social media and head to the outback to gaze heavenwards.

In fact, having recently visited Uluru, the astrophysicist thinks a high-speed “cosmic train” that links the capital cities to the red centre would be a good thing, so people could regularly travel there to connect with the cosmos.

“I think people are starved for it, and they don’t even know it,” he says.

He’s sorry to disappoint those who imagine we could communicate with any intelligent life existing on some of the planets being discovered with Earth-like properties, but they’re too far away for today’s technology.

“There is no witty repartee possible in any known understanding of the structure and fabric of the universe,” he says. “We need wormholes and warp drives and all the things that are common in science fiction. We’re nowhere close to that at all.”

When asked about the nature of time, he gives the functional but “cop-out” explanation that physicists define time so motion can be described easily with equations.

“But I also think of time as this prison,” Dr Tyson adds. “Time makes us all a prisoner of the present, forever transitioning from our own past into an unknown future.

“That‘s particularly disturbing to me, because we can move back and forth in any other co-ordinate – up and down, left and right, forward and back. But we’re stuck in time.”

Extinction alert: saving the world from a deadly asteroid impact