In a world-first advance, Professor Merlin Crossley and his team have shown that changing just a single letter of the DNA of human red blood cells increases their production of oxygen-carrying haemoglobin. 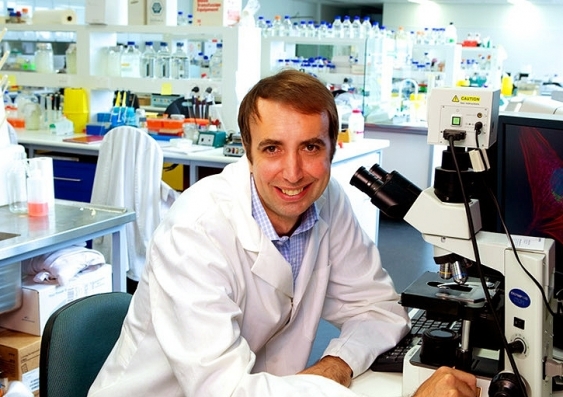 Professor Merlin Crossley and his team have shown that changing just a single letter of the DNA of human red blood cells in the laboratory increases their production of oxygen-carrying haemoglobin – a world-first advance that could lead to a cure for sickle cell anaemia and other blood disorders.

The new genome editing technique, in which a beneficial, naturally-occurring genetic mutation is introduced into cells, works by switching on a sleeping gene that is active in the womb but turned off in most people after birth.

“An exciting new age of genome editing is beginning, now that single genes within our vast genome can be precisely cut and repaired,” says Professor Crossley, who is Dean of Science.

“Our laboratory study provides a proof of concept that changing just one letter of DNA in a gene could alleviate the symptoms of sickle cell anaemia and thalassaemia – inherited diseases in which people have damaged haemoglobin.

“Because the good genetic variation we introduced already exists in nature, this approach should be effective and safe. However more research is needed before it can be tested in people as a possible cure for serious blood diseases.”

The study, by Professor Crossley, UNSW PhD student Beeke Wienert, and colleagues, is published in the journal Nature Communications.

People produce two different kinds of haemoglobin – the vital molecule that picks up oxygen in the lungs and transports it around the body.

“During development in the womb, the foetal haemoglobin gene is switched on. This produces foetal haemoglobin, which has a high affinity for oxygen, allowing the baby to snatch oxygen from its mother’s blood,” says Professor Crossley.

People who inherit two mutant genes – one from their mother and one from their father – have damaged haemoglobin and suffer from life-threatening diseases such as sickle cell anaemia and thalassaemia, which require life-long treatment with blood transfusions and medication.

The researchers based their new approach on the fact that a small number of people with damaged adult haemoglobin have an additional, beneficial mutation in the foetal haemoglobin gene.

“This good mutation keeps their foetal haemoglobin gene switched on for the whole of their lives, and reduces their symptoms significantly,” says Professor Crossley.

The researchers introduced this single-letter mutation into human red blood cells using genome-editing proteins known as TALENs, which can be designed to cut a gene at a specific point, as well as providing the desired piece of donor DNA for insertion.

“Breaks in DNA can be lethal to cells, so they have in-built machinery to repair any nicks as soon as possible, by grabbing any spare DNA that seems to match – much like you might darn a red sock with any spare red wool lying around,” says Professor Crossley.

“We exploited this effect. When our genome editing protein cuts the DNA, the cell quickly replaces it with the donor DNA that we have also provided.”

If the genome-editing technique is shown to work effectively in blood stem cells and be safe, it would offer significant advantages over other approaches, such as conventional gene therapy, in which viruses are used to ferry healthy genes into a cell to replace the defective ones.

The genetic changes to cells would not be inherited, making the approach very different to recent controversial Chinese research in which the DNA of human embryos was altered.