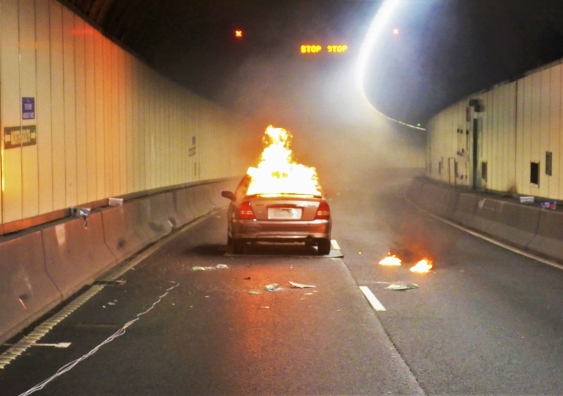 Wi-Fi transmitters and receivers were set up to monitor readings from this controlled test explosion of a car in the Sydney Harbour Tunnel. Photo from Aruna Seneviratne.

Engineers from UNSW Sydney have developed a new fire detection system that could help save lives by monitoring the changes in Wi-Fi signals.

And a controlled test detonation of a car, planned by the Sydney Harbour Tunnel Company, recently provided further data to demonstrate the effectiveness of the technology.

Professor Aruna Seneviratne, Dr Deepak Mishra, and a team from the School of Electrical Engineering and Telecommunications have designed and built a system that monitors Wi-Fi signals as they pass through the air – and analyses detailed changes in the environment due to such things as temperature and smoke.

This controlled detonation of a car, planned by the Sydney Harbour Tunnel Company and under test conditions with all fire systems set to manual mode, recently helped provide data to demonstrate the effectiveness of new Wi-Fi fire detection technology. Video supplied by Transport for NSW.

The researchers have identified the distinctive patterns in the data from radio signals during fire events, and artificial intelligence within their software helps analyse the environment in real-time.

The system can then determine with greater accuracy whether any atmospheric changes are being caused by a real fire, and if so, raise an alarm or trigger an automatic sprinkler system.

Existing detection systems, which are largely based on thermal imaging, often produce false positive readings by detecting levels of smoke or changes in temperature which are not dangerous or caused by an actual fire – perhaps from a faulty exhaust pipe on a vehicle or a hot radiator.

But Prof. Seneviratne and his team were able to showcase their new technology during a controlled test in the middle of the night inside the Sydney Harbour Tunnel.

In conjunction with Trantek MST, the incumbent mission-critical systems vendor for the tunnel, and the tunnel owner/operator, Sydney Harbour Tunnel Company, the researchers set up a series of transmitters and receivers to monitor the environment as a test car prepared for the purpose was detonated and set on fire during a scheduled emergency response training exercise.

The project to test the first real-life application of this technology was supported through Innovation Connections, which provided matched funding support to Trantek and connected researchers at UNSW with the business. Innovation Connections is part of the Australian Government Entrepreneurs’ Programme, delivered nationally by CSIRO, Australia’s national science agency.

“It is basically relatively simple high school physics. What we have are a transmitter and a receiver and we can monitor the radio signal as it travels through the air,” Prof. Seneviratne says.

“As the air temperature changes, so does its density, and that changes the signature of the reading when we receive the signal. In fact, we have experimentally demonstrated that these changes are strongly correlated with the rise or fall of temperature in the environment between transmitter and receiver. 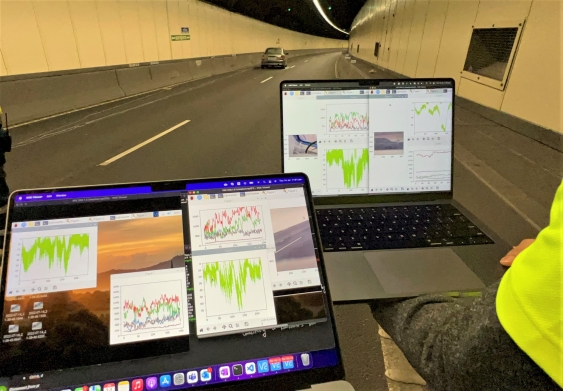 The research team from UNSW Sydney are able to monitor Wi-Fi radio signals as they pass through the air and have identified distinctive patterns in the data which are caused during fire events. Photograph from Aruna Seneviratne.

“Smoke and different gases, such as carbon monoxide that can be produced in fire situations, also affect the density of the air and will give distinctive signatures on our readings. Specifically, these signatures are captured in the form of wireless channel information.

“What we also add into the system is artificial intelligence to analyse all the data and compare to baseline readings to help determine if there is a real fire occurring.”

The new system developed at UNSW exploits the fact that Wi-Fi waves have various transmission frequencies, known as subcarriers. Just as different wavelengths of light are affected uniquely by different objects, different frequencies of Wi-Fi are also impacted in a variety of ways.

The Wi-Fi sensing system, therefore, amalgamates the effect of the environmental phenomena on all the Wi-Fi subcarrier frequencies and applies data processing to find the most sensitive frequencies which help aid the analysis.

Up to 1300 packets of data per second can be processed and analysed. 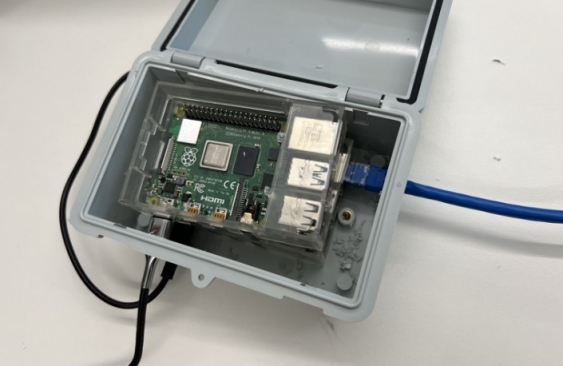 For the Sydney Harbour Tunnel test UNSW researchers placed a series of low-cost Wi-Fi transmitters and receivers, running on Raspberry Pi and installed in a waterproof enclosure, along the roadway to detect the change in signals caused by fire and smoke. Photo from Aruna Seneviratne.

Prof. Seneviratne says the new technique is important to improve confidence in automatic fire detection systems which can currently sometimes struggle even to differentiate between a fire and a bright flickering neon light.

The UNSW team believe their system can be applied in a wide range of environments, including in industrial locations, commercial high-rise buildings and even in the home.

Assembling an array of transmitters and receivers also helps to identify the zonal location of a specific fire which can then aid emergency services to respond quickly and efficiently.

As well as improved sensing, the Wi-Fi system also promises to be much cheaper than existing thermal imaging camera technology and is easier to maintain.

“Existing specialised fire detection cameras can cost around $10,000 to buy, whereas our transmitters and receivers are $100 or even less,” Prof. Seneviratne says.

“The other thing with cameras is that they need to be carefully maintained. The lenses need to be kept clean and they often need to be properly aligned.

“With our system, the transmitters and receivers are just sending out a radio signal and there is very little maintenance required. Therefore, there is also a much lower cost to operating the system.” 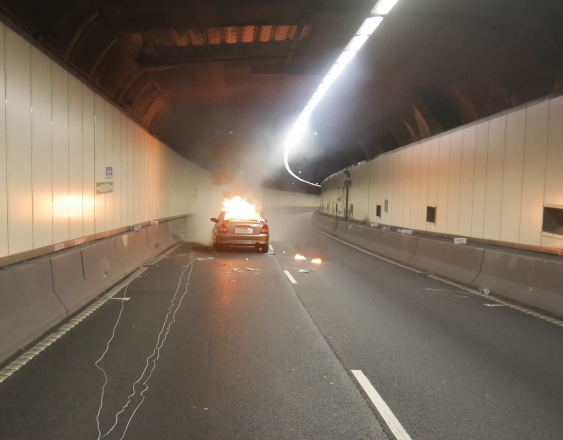 UNSW researchers set up a series of transmitters and receivers to monitor the environment as a test car was detonated and set on fire during a scheduled emergency response training exercise in the Syndey Harbour Tunnel. Photograph from Aruna Seneviratne.

“The industry-led research collaboration between Trantek MST and UNSW has significantly accelerated the readiness for deployment. It’s now time to rewrite the standards on fire detection.”

Professor Julien Epps, Head of School of Electrical Engineering and Telecommunications at UNSW, said: “This patent pending method of fire detection has the benefit of determining the zone of a fire, which is essential for alerting operations and first responders.

“This is a significant Australian breakthrough in electrical and telecommunications engineering.”