It was the whales’ singing that gave them away. 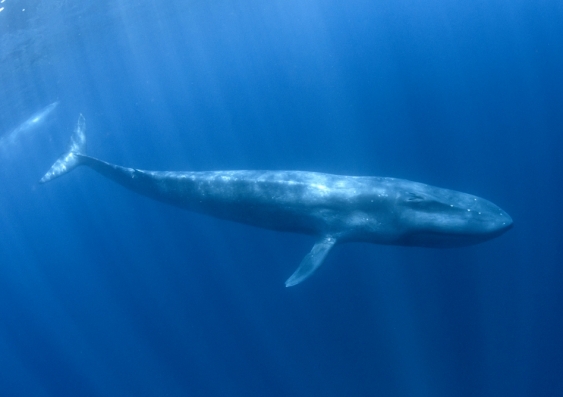 Blue whales might like to live the quiet life, but they have a powerful song that can travel anywhere between 200 and 500 kilometres – and give away important clues about their identity. Photo: Shutterstock.

Blue whales may be the biggest animals in the world, but they’re also some of the hardest to find.

Not only are they rare (it’s estimated that less than 0.15 per cent of blue whales in the Southern Hemisphere survived whaling), they’re also reclusive by nature and can cover vast areas of ocean.

But now, a team of scientists led by UNSW Sydney are confident they’ve discovered a new population of pygmy blue whales, the smallest subspecies of blue whales, in the Indian Ocean.

And it was the whales’ powerful singing – recorded by underwater bomb detectors – that gave them away.

“We don’t know how many whales are in this group, but we suspect it’s a lot by the enormous number of calls we hear.”

The discovery was made possible using data from the Comprehensive Nuclear-Test-Ban Treaty Organization (CTBTO), an organisation that monitors international nuclear bomb testing.

Since 2002, the CTBTO have been using advanced underwater microphones (called ‘hydrophones’) to detect soundwaves from potential nuclear bomb tests. The recordings – which pick up many other detailed ocean sounds – are available to scientists to use for their marine science research.

“Blue whales in the Southern Hemisphere are difficult to study because they live offshore and don’t jump around – they're not show-ponies like the humpback whales,” says Prof. Rogers.

The UNSW-led team were studying the data when they found an unusually strong signal: a whale song that had previously been identified in the recordings, but that scientists still knew little about. After closely studying its composition (details like the song’s structure, frequency and tempo), they realised that it belonged to a group of pygmy blue whales – but not any of the ones previously recorded in the area.

“I think it’s pretty cool that the same system that keeps the world safe from nuclear bombs allows us to find new whale populations, which long-term can help us study the health of the marine environment,” says Prof. Rogers.

Pygmy blue whales are the smallest members of the blue whale family, but that’s the only small thing about them: they can reach up to 24 metres’ long, which is almost the length of two standard buses.

If visual sightings confirm this new population, they would become the fifth population of pygmy blue whales to be discovered in the Indian Ocean.

The findings, recently published in Scientific Reports, have come in time for World Oceans Day.

“Blue whales in the Southern Hemisphere are difficult to study because they live offshore and don’t jump around – they're not show-ponies like the humpback whales,” says Prof. Rogers.

“Without these audio recordings, we’d have no idea there was this huge population of blue whales out in the middle of the equatorial Indian Ocean.” 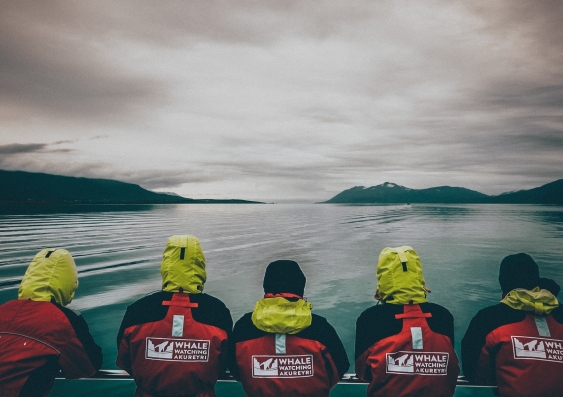 Unlike many other types of whales, blue whales rarely breach the surface, preferring to stay hidden underwater. Photo: Unsplash.

A chorus of whales

Dr Emmanuelle Leroy, the lead author of the study and former postdoctoral researcher at UNSW Science, is a bioacoustician – someone who studies how animals create and receive sounds. She was studying the CTBTO data when she noticed a peculiar pattern emerging.

“At first, I noticed a lot of horizontal lines on the spectrogram,” says Dr Leroy. “These lines at particular frequencies reflect a strong signal, so there was a lot of energy there.”

To find out if the signal was a random blip or something more, Dr Leroy and the team scanned 18 years’ worth of CTBTO data – the entire available dataset since the recording started – to look for any wider patterns.

They found the songs weren’t just a random occurrence.

“Thousands of these songs were being produced every year,” she says. “They formed a major part of the ocean’s acoustic soundscape.

“The songs couldn’t have just been coming from a couple of whales – they had to be from an entire population.” 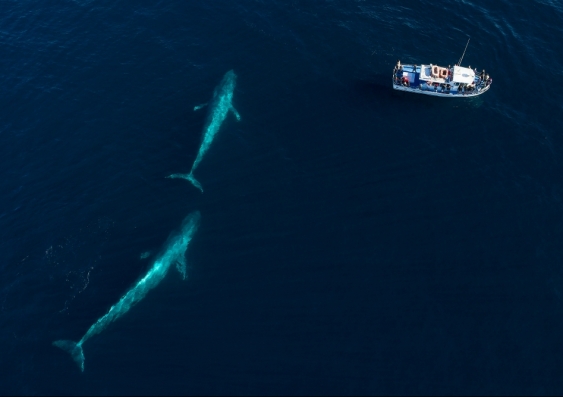 Even though blue whales like to travel undetected, they can give away their identities by the type of melody they sing. Photo: Shutterstock.

Like many other whales, blue whales are powerful singers: scientists estimate their songs can travel anywhere between 200 and 500 kilometres. These songs are very low frequency (barely audible to the human ear) and have a different structure to other whales’ songs.

“Humpback whales are like jazz singers,” says Prof. Rogers. “They change their songs all the time.

“Blue whales, on the other hand, are more traditional. They sing very structured, simple songs.”

Music style can even change within a whale species: each of the known pygmy blue whale populations in the Indian Ocean sing slightly different melodies. Prof. Rogers says these musical differences are similar to generational slang between humans.

“We still don’t know whether they're born with their songs or whether they’ve learnt it,” she says.

“But it’s fascinating that within the Indian Ocean you have animals intersecting with one another all the time but whales from different regions still retain their distinctive songs. Their songs are like a fingerprint that allows us to track them as they move over thousands of kilometres.”

Dr Leroy compared the acoustic features of the song with the three other blue whale song-types known in the Indian Ocean, as well as with four types of Omura’s whale songs (another whale in the area) – but the evidence pointed towards this being an entirely new population of blue whales.

The team named the newly-found population ‘Chagos’, after the archipelago they were detected nearby.

“We suspect that the whales singing the Chagos song move at different times across the Indian Ocean,” says Prof. Rogers.

“We found them not only in the central Indian Ocean, but as far north as the Sri Lankan coastline and as far east in the Indian Ocean as the Kimberley coast in northern Western Australia.”

While the team are confident in their findings, Dr Leroy says it’s impossible to confirm the species without a visual observation. Visual sightings for such an elusive animal can be tricky and expensive to fund, so it’s unlikely this will be verified anytime soon.

“If it isn’t a blue whale, it definitely sings like one,” says Dr Leroy. 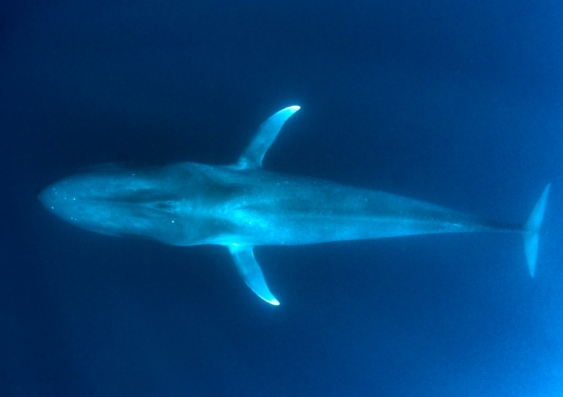 It’s estimated that less than 0.15 per cent of blue whales in the Southern Hemisphere survived last century's whaling. Photo: Shutterstock.

A big find for conservation

The finding is big news for marine conservation, as blue whales were brought to the edge of extinction after whaling in the 20th century.

And unlike many other types of whales in the Southern Hemisphere, their numbers haven’t sprung back.

“Discovering a new population is the first step to protecting it,” says Dr Leroy.

Acoustic information hidden in whale songs can also teach us more about the animals, like their spatial distribution, migration patterns and population numbers. A previous study led by Dr Leroy even found the changing pitch of blue whales’ songs could be a response the noise of cracking icebergs.

Prof. Rogers is now leading a team using the CTBTO data to study how the Chagos population has changed over time. The findings could teach us how the whales adapted to warming ocean temperatures over the past 18 years – and how they might fare moving into the future.

“The largest animal in the world is one of the hardest ones to actually study,” says Prof. Rogers.

“There are many more of these blue whales out there than we’ve realised – and we’ve only been able to find them with the help of this international infrastructure.”