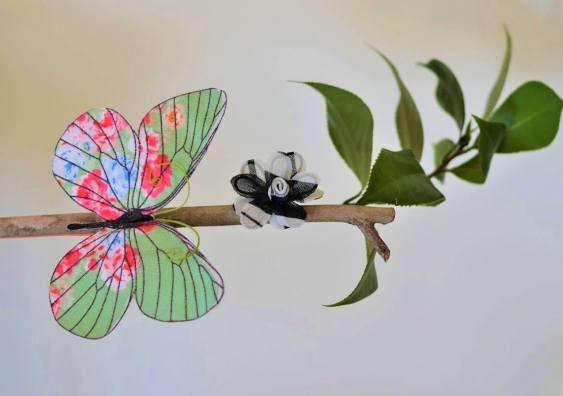 The UNSW team's smart textile enables fabric reconfiguration which produces shape-morphing structures such as this butterfly and flower that can move using hydraulics. Image supplied by authors

Engineers have developed a new class of smart textiles that can shape-shift and turn a two-dimensional material into 3D structures.

The team from UNSW Sydney’s Graduate School of Biomedical Engineering, and Tyree Foundation Institute of Health Engineering (Tyree iHealthE), led by Dr Thanh Nho Do, have produced a material which is constructed from tiny soft artificial ‘muscles’ – which are long silicon tubes filled with fluid which are manipulated to move via hydraulics.

These artificial muscles, which are surrounded by a helical coil of traditional fibres, can be programmed to contract or expand into a variety of shapes depending on its initial structure.

The research team, who published their latest findings in Scientific Reports and Soft Robotics journals said that the new smart textile could have a wide range of applications in many different fields.

These potentially include use as a compression garment in medical and health scenarios, as a wearable assistive device for those needing help with movement, and even as shape-shifting soft robots which can aid the recovery of people trapped in confined spaces.

The UNSW Medical Robotics Lab team’s smart textile can either be attached to existing passive material, or the artificial muscles can be inter-woven with traditional yarn to create an active fabric.

“These ‘smart fluid textiles’ take the advantage of hydraulic pressure and add the fast response, lightweight, high flexibility and small size of soft artificial muscles. In effect, we have given our smart textiles the expansion and contraction ability in the exact same way as human muscle fibres,” said Scientia Senior Lecturer Dr Do.

“Our smart textiles can be programmed to perform various desired motions and deformations such as shape-shifting structures from 2D to 3D.

“This material has significant benefits as it is made from miniature soft artificial muscles which offer a thin, flexible, and highly conformable structure.

Engineers from UNSW demonstrate the new class of smart textiles that can shape-shift and turn a two-dimensional material into 3D structures. Video supplied by authors

“We propose it can be used to develop new medical compression devices, for example, that are low-profile and lead to better medical outcomes. Patients with poor blood circulation could benefit from smart garments that contract to apply desired pressure to superficial veins and assist blood supply.

“Athletes also use compression garments to recover at a faster rate and reduce muscle soreness after training, and our smart textile has potential to be utilised in that area.

“We envision our material could be used to develop soft exoskeletons to enable people with disabilities to walk again or augment the human performance.

“Most existing technologies in that field are still based around rigid robotic suits, but it is our hope that we could create a lightweight, soft exoskeleton that looks and feels just like leggings which can be worn like normal clothing.

“This could then aid those with impaired mobility to walk.” 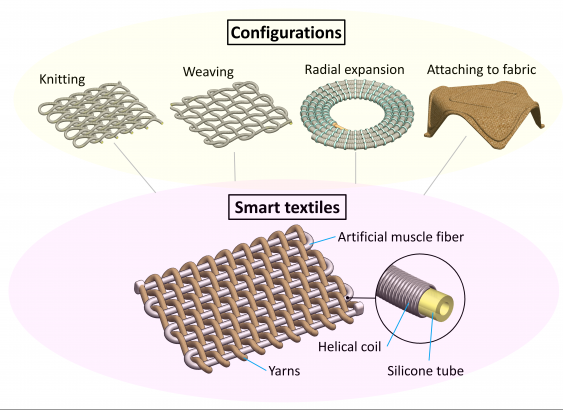 As well as wearable devices, the team - including PhD students at the UNSW Medical Robotics Lab including the study’s first author Phuoc Thien Phan and his collaborators, Scientia Professor Nigel Lovell, Head of the Graduate School of Biomedical Engineering and Director of Tyree iHealthE, and Dr Hoang-Phuong Phan from the School of Mechanical and Manufacturing Engineering - are also excited by the opportunity to develop so-called soft robots which can perform a range of useful tasks.

“Traditional robots are effective when working in structured environments, but they are quite rigid and encounter problems dealing with unknown contexts of changing environments,” Phuoc Thien Phan said.

Scientia Professor Nigel Lovell said: “Soft robots utilising our smart textile can shape shift and be implemented as a lifting mechanism, such as when rescuing people from collapsed buildings or other hazardous environments, or as a soft tubular gripper – in our experiments we could lift objects around 346 times the material’s own weight.”

The UNSW team have a patent cooperation treaty (PCT) application around the new technology and is continuing to work on further developments, including the integration of a soft miniature pump and wireless communication modules which will enable an untethered system.

Dr Do has also received funding from the National Heart Foundation of Australia and the new smart textile has potential to assist in helping failing hearts pump blood around the body, especially if it can be automatically synchronised with the heartbeat to augment the cardiac function.