Researchers have uncovered an elaborate system for adaptation in Staphylococcus aureus, identifying and characterising mechanisms for multi-drug resistance and providing new lines for antibiotic defence. 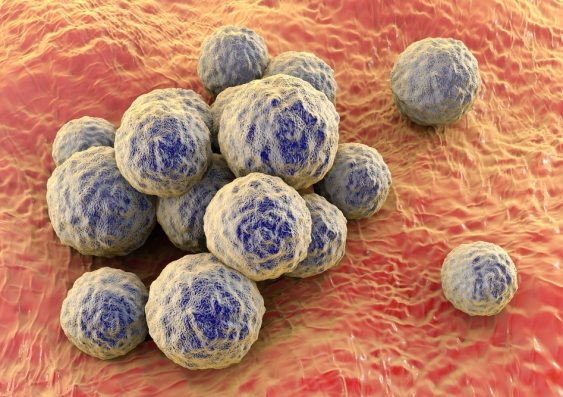 In many parts of the world, Staphylococcus aureus (golden staph) has become tolerant to our last line of defence, the antibiotic vancomycin.

An international team of researchers, including those from UNSW’s School of Biotechnology and Biomolecular Sciences, have applied a promising new tool – CLASH – to capture hundreds of undiscovered mechanisms of gene regulation in a strain of multi-drug resistant Staphylococcus aureus (MRSA).

The 500 mechanisms uncovered by the new tool were based on the mRNA of S. aureus. Normally serving merely as instructions for making proteins, these newly revealed mRNAs were controlling other genes in S. aureus through direct interactions – regulating the bacteria’s very own genetic information and antibiotic tolerance.

Among those RNAs found was a mechanism that thickens the bacteria’s cell wall – a change commonly seen in clinical strains of MRSA that are tolerant to last-line antibiotics – potentially identifying new targets for antibiotic treatment. Their work has been published in Nature Communications.

“Before our study, only three other mRNAs had been shown to regulate bacterial RNA,” says co-author Associate Professor Jai Tree. “It’s relatively rare. But looking at our CLASH data was the real surprise. We found that in Staphylococcus aureus, there was evidence for 543 regulatory mRNAs interactions.”

“This is a shift from our current understanding of gene regulation in bacteria.”

This system of adaptation in S. aureus has remained undetected due to a lack of tools for broadly capturing RNA interactions. In other disease-causing bacteria, related techniques rely on the presence of particular proteins, proteins that don’t seem to function in S. aureus.

Where mRNA is responsible for reading DNA and, from the mRNA's message, being translating into proteins – the mRNAs in S. aureus are taking on a regulatory function, informing the pace and production of other mRNAs being produced.

“When a gene (DNA) is transcribed into RNA, a little bit of extra sequence is transcribed from either side – like the aglets of a shoelace – these are termed the ‘untranslated regions’ or UTRs,” says A/Prof Tree. “It’s these UTRs of mRNAs in S. aureus that are performing a regulatory role.

“And where a typical UTR is 40 to 50 bases long, we found that around one-third of the UTRs in S. aureus are 100 bases long – which is long. This likely adds an entirely new layer of gene regulation.”

With their bizarrely long stretches, the capped ends of mRNA in S. aureus are no longer simply 'untranslated regions' but a whole new instrument for gene regulation and thus antibiotic tolerance. Shutterstock.

Operating at the last line of defence

The particular strain of S. aureus used in this study was taken from a patient with MRSA septicaemia who was treated for 42 days with our ‘last-line of defence’ and most effective antibiotic: vancomycin. Since S. aureus do not acquire vancmycin tolerance extraneously from other S. aureus but evolve it through a series of mutations, the researchers analysed this strain using CLASH to understand how they were becoming vancomycin tolerant.

“One of the mRNA UTRs we discovered was a regulatory RNA that promotes an enzyme involved in cell wall thickening. It’s this thickening that is consistent with vancomycin-tolerant S. aureus,” says A/Prof Tree.

“We found evidence of over 500 mRNA-mRNA interactions occurring in S. aureus – information uncovered by CLASH that allows us to ascribe functions to many regulatory RNAs in S. aureus – often for the first time.

“The ‘superbug’, multi-drug resistant Staphylococcus aureus is a major problem in both healthcare and community settings,” says A/Prof. Tree. “Treatment options for MRSA septicaemia – infections that enter the blood – are limited to last-line antibiotics, and the treatment of choice is vancomycin.

By revealing one of the mechanisms involved in vancomycin tolerance in S.aureus (that previously unobserved mRNAs are increasing cell wall thickness) researchers now have an opportunity to exploit this mechanism, ‘re-sensitising’ resistant S. aureus to vancomycin again.

“There has been renewed interest in using ‘antisense RNA’ that can be delivered into the bacterial cell, penetrating the cell wall and binding RNAs within the cell. In this way, we might be able to co-administer an antisense RNA with vancomycin – the antisense RNA would make MRSA sensitive and the vancomycin would kill the cell,” says A/Prof Tree.

The next steps to overcoming antibiotic tolerance

While the functions of some mRNAs in S. aureus have been ascribed, there remains a lot of work to do – especially given the varied mechanisms behind vancomycin-tolerance S. aureus.

“The next steps are to understand if [the regulatory RNA we’ve already isolated] is required for a broad spectrum of other, clinical strains of vancomycin-tolerant S. aureus. These are genetically heterogenous isolates and one of the difficulties has been the multitude of methods of becoming vancomycin tolerant.

“So we would like to understand if targeting the regulatory RNA would be a useful approach for many different vancomycin tolerant strains. Although we don’t know exactly what all the mRNAs are doing, our next step is to identify the really important ones.”