Cutting edge UNSW research projects resulting from catastrophes such as fires, tsunamis, terrorism and infectious diseases are the focus of a new video series produced by UNSWTV. 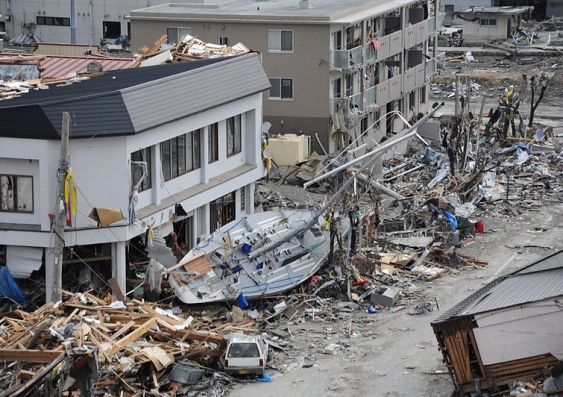 A scene of devastation after the 2011 Japanese tsunami

Cutting edge UNSW research projects resulting from catastrophes such as fires, tsunamis, terrorism, climate change and infectious diseases are the focus of a new video series produced by UNSWTV.

Titled Catastrophic Science, the series is hosted by two students – Heidi Wright, a second year student in Science and Engineering, and Matthew McLaren, a PhD candidate in Built Environment.

In the first episode, UNSW Science’s Professor James Goff and Dr Chagué-Goff outline potentially life-saving research that has come out of the 2011 Japanese tsunami.

By detecting invisible salt levels in soil, the research has revealed that tsunamis travel far further inland than had previously been estimated using visible signs of sand deposits. The new knowledge will allow planning to help mitigate the impact of future disasters.

The series covers research from the Faculties of Science, Engineering, Medicine, Law, Arts and Social Sciences, as well as UNSW Canberra.

“I thought it was a brilliant way for a broad audience to understand the valuable and tangible role that UNSW research plays in our lives and how it can benefit societies around the world.

“The series has been an outstanding effort from producer Elena Hattersley and the UNSWTV crew. And it will reach a global audience. Apart from running on our own UNSWTV channel, it will feature on The Guardian worldwide, Sciencealert, RiAus’ Australian Science TV Channel, and the ABC’s educational portal Splash.”

Heidi says the experience of co-hosting the series is helping her decide where to steer her academic career: “It’s like a smorgasbord of science, with so much variety and so many interesting topics. I found our recent story about the Antarctic ice caps completely amazing.”

While it required some juggling to fit the filming in between her studies, competitive sport, and other volunteering activities, it has been a very rewarding experience, she says: “I’ve had an unparalleled opportunity to meet academics and learn about their research. I think science is awesome and it is important to reach out and share it with others.”

Matthew, who is studying natural disaster management for his PhD, says meeting experts in disaster research has enhanced his learning, and he has enjoyed making complex research accessible and easy to understand.

“I most enjoyed the medium of filming a short series. It is a unique and creative mode of communication which I had limited exposure to before this year.

“I found filming a series like this shows how much research is being conducted at this University, let alone around the world. Each story had new things I was not aware of.

"The biggest surprise probably came from the story on coastal erosion, which has caused many people to become climate migrants, forced to leave their homes. This was surprising due to the rate at which it is occurring – faster than Google Maps can keep up.”