UNSW researchers have used a new water-tracing technology in the Sydney Basin for the first time to determine how groundwater moves in the different layers of rock below the surface. 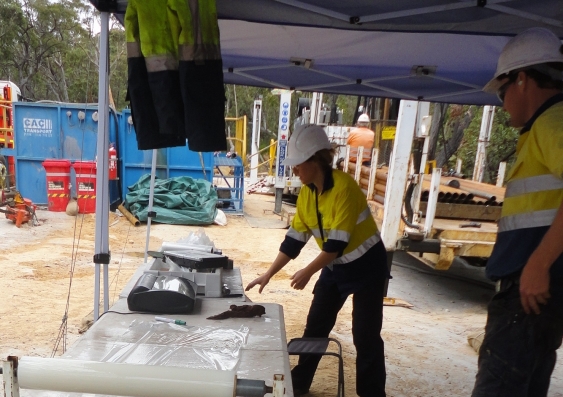 Katarina David (left) of the UNSW Connected Waters Initiative preserves samples of moist rock at a drilling site near Sydney for later testing in the laboratory.

UNSW Australia researchers have used new water-tracing technology in the Sydney Basin for the first time to determine how groundwater moves in the different layers of rock below the surface.

The study provides a baseline against which any future impacts on groundwater from mining operations, groundwater abstraction or climate change can be assessed.

“All underground engineering projects have the potential to have an impact on groundwater,” says study author and PhD candidate Katarina David, from the UNSW Connected Waters Initiative (CWI).

“So it is essential we understand how the water falling on the surface finds its way to the aquifers deep underground.”

Study author, Dr Wendy Timms, also from CWI, says: “This is particularly important in the southern Sydney basin where six underground coal mines operate within the Sydney water supply catchment, and underneath wetlands and sensitive ecosystems.

“Our research has global relevance as well, because this new technology provides a quick and cheap alternative to having to install numerous boreholes for groundwater monitoring.”

The study is published in the journal Science of the Total Environment.

The team used a 300-metre deep core drilled through the layers of sandstone and claystone at a site on the Illawarra plateau. Small sections of the moist rock from the core were then carefully preserved and analysed in the UNSW laboratory.

“The best tracer of water is water itself. So we directly analysed the groundwater in the pores of the rock from different depths and rock types, using the latest laser technology,” says UNSW Centre Director Professor Andy Baker.

“We identified the different isotopes of hydrogen and oxygen in the water, which allowed us to work out where the water came from. We identified four distinctive layers of rock, or hydrogeological zones, which control groundwater movement in the Sydney Basin.

“The water moves very slowly underground, and has taken a long time to reach a depth of 300 metres. But we found the isotopic composition of the deep water was similar to that of modern rainfall, which means the system in the Sydney Basin has been relatively stable for thousands of years.

“Using this as a baseline we can detect any future changes in water flow or water quality.”

The technique has the advantage that hundreds of rock samples from a single core can be quickly and cheaply analysed. It can also be used for sites where the groundwater is very deep or held tightly in the pores of the rock.