Introducing Australian emus and cassowaries to New Zealand to fill the ecological gap left by the extinction of the moa would most likely fail, reconstructions of the giant flightless birds' feeding behaviours show. 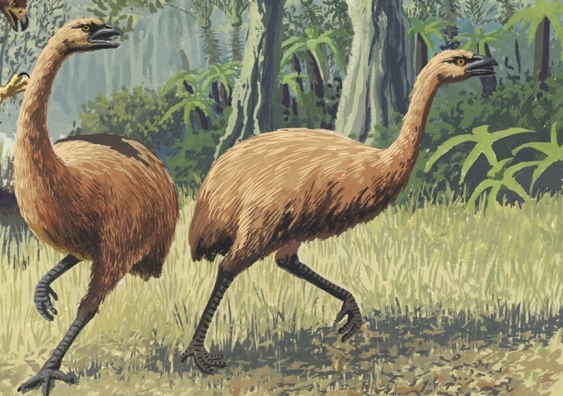 A proposal to introduce Australian emus and cassowaries to New Zealand to fill the ecological gap left by the extinction of the moa has been knocked on the head, thanks to high-tech reconstructions of the flightless birds' biting and feeding behaviours.

A trans-Tasman team of scientists used medical scanners to digitally reconstruct the feeding behaviours of the nine extinct species of moa. When they were compared to the habits of two living relatives, the emu and cassowary, the moa were found to be unique in their feeding techniques and patterns and therefore irreplaceable.

We wanted to test whether the emu and cassowary would bite and therefore eat in the same way as the moa, and our research indicated that they wouldn’t.

The findings have been published in the journal Proceedings of the Royal Society B.

The research by scientists from UNSW Australia, Canterbury Museum, the University of Auckland, Flinders University and the University of New England (Australia) used engineering methods to solve a conservation dilemma by showing that Australian emus and cassowaries are no surrogates for the different species of moa, who were able to co-exist because of differences in the structure and strength of each species’ bills and which in turn influenced or dictated their diet.

The moa (Dinornithiformes), which roamed New Zealand until the fifteenth century, were herbivores and some of the largest birds to have ever existed. The largest species, the South Island Giant moa, weighed up to 240 kg and measured 3.6 metres (12 ft) in height while the smallest, the upland moa, was the size of a sheep. Until now scientists had thought that the huge differences in size between the species determined their foraging behaviour as well as what, when and where they ate.

This new research advances our understanding about the feeding behaviours of the moa species and their impact on New Zealand’s unique and distinctive flora.

The team took the most complete skulls of each species of moa from the collections of Canterbury Museum and Te Papa Tongarewa and scanned them using medical CT (Computed Tomography) scanners.

“The mummified skulls were so well preserved we were able to reconstruct highly accurate 3D models of the birds’ muscle tissue from CT and MRI scans. This allowed us to create engineering models to compare skull stress test from different biting loads in the different specimens,” Dr Parr said.

“We wanted to test whether the emu and cassowary would bite and therefore eat in the same way as the moa, and our research indicated that they wouldn’t. This approach uses engineering methods to inform ecological and potential conservation questions.” 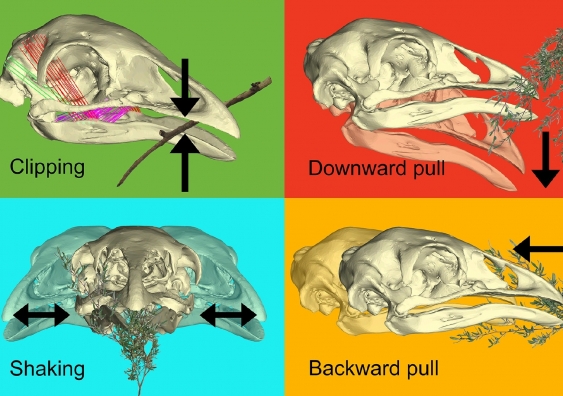 Using medical MRI scans of exquisitely-preserved mummified remains made by Dr Peter Johnston of the University of Auckland, the researchers digitally reconstructed the muscles of each species. Software used by civil engineers after the Canterbury earthquakes to identify weak or unsound buildings, was then employed to test the strength and structure of each species’ skull.

The models simulated the response of the skull to different biting and feeding behaviours including clipping twigs and pulling, twisting or bowing head motions to remove foliage.

Dr Marie Attard of the University of New England says that the skull mechanics of moa were found to be surprisingly diverse. “The little bush moa had a relatively short, sharp-edged bill and was superior among moa at cutting twigs and branches, supporting the proposition that they primarily fed on fibrous material from trees and shrubs.

“At the opposite extreme, the coastal moa had a relatively weak skull compared to all other species which may have forced them to travel further than other moas in search of suitable food, such as soft fruit and leaves.”

Dr Trevor Worthy, a New Zealander working at Flinders University, said until now we have been limited in assessing anatomical function to examining the external aspect of bones.

This new technology allows us to bring new life to old bones and to get one step closer to understanding the birds they came from.”

"Little has been known about how New Zealand’s ecosystem evolved, largely because we know so little about how moa lived and co-existed." says Associate Professor Stephen Wroe of the University of New England. “This new research advances our understanding about the feeding behaviours of the moa species and their impact on New Zealand’s unique and distinctive flora.”