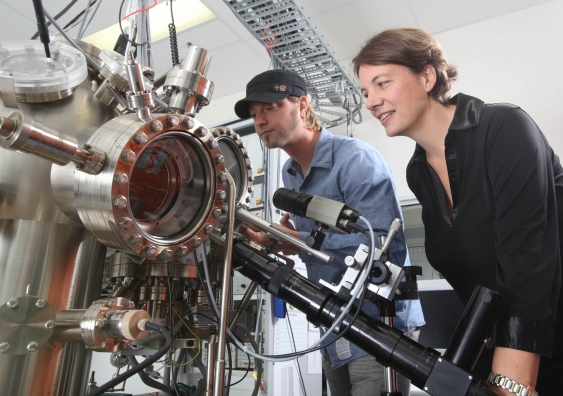 NSW Premier Mike Baird has used part of his address in the annual Bradfield Oration to single out UNSW Professor Michelle Simmons and her team’s pioneering work in the race to build the world’s first quantum computer in silicon.

Leading figures from the worlds of business, politics and finance heard the NSW Premier highlight how Australia is now two to three years ahead of the rest of the world in the race to build the computer, which will unlock complex problems facing modern society.

“Professor Simmons and her team have used that technology to build the world’s first single atom transistor, and that work is one of the next steps in pioneering the world’s first quantum computer in silicon,” Premier Baird said.

“The general consensus in the scientific community was that there were eight stages to realise the goal of a single atom transistor, and that this would be near impossible.”

“The team have since solved all of those eight stages and they are now the only group in the world that can make electronic devices at the level of single atoms.”

Premier Baird told the audience that NSW must continue to invest in this kind of technology so the state maintains its place in the race - leading the rest of world.

“But we cannot afford to be complacent. We must compete, and we need to create the spaces where good ideas such as those of Professor Simmons can incubate,” he said.

Professor Michelle Simmons is ARC Laureate Fellow and Director of the ARC Centre of Excellence for Quantum Computation and Communication Technology at UNSW. The centre brings together 180 researchers across Australia and 12 international partners.