The prevalence of obesity has doubled in Australia in the last two decades. As a result, overweight and obesity will be associated with 10,000 thyroid cancers in the next decade. 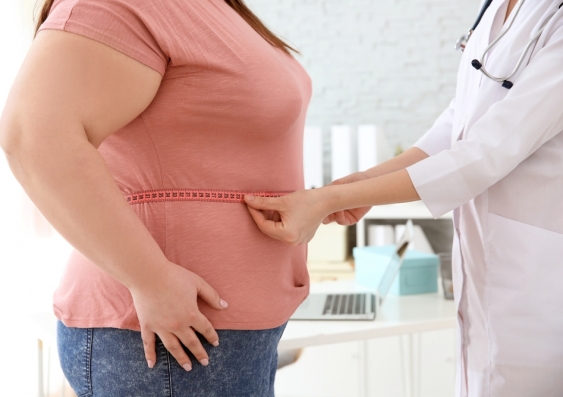 Avoiding excess weight, especially obesity, should be a priority for thyroid cancer prevention, the first study to evaluate future thyroid cancer burden in Australia has found.

The world-first study published in the International Journal of Cancer and led by Dr Maarit Laaksonen from UNSW’s School of Mathematics and Statistics, found that one in five future thyroid cancers in Australia is attributable to current levels of overweight and obesity.

“This finding translates to close to 10,000 thyroid cancers in the next 10 years,” Dr Laaksonen says. “Obesity explains 75 per cent of this burden in Australia.”

The main authority for cancer research, the International Agency for Research on Cancer, has concluded that body fatness is a causal risk factor of thyroid cancer.

But Dr Laaksonen says this is the first time a study has evaluated the thyroid cancer burden attributable to current levels of overweight and obesity and compared this burden by sex.

Thyroid cancer is one of the few cancers that is 2-3 times as common in women as in men, but Dr Laaksonen says the study found that the future thyroid cancer burden attributable to overweight/obese is higher for men compared with women.

“It is still not well understood what causes the sex difference in overweight/obesity-related thyroid cancer risk,” Dr Laaksonen says.

“But our findings add evidence to the urgent need to halt and reverse the current global trend in weight gain, especially obesity and especially in men.”

Dr Laaksonen says while this study defines what is linked to one in five thyroid cancers in Australia, it’s not well understood what explains the remainder.

“Other lifestyle factors do not appear to be implicated but ionizing radiation exposure, iodine deficiency and some genetic factors and family history are known to increase the thyroid cancer risk. Thyroid cancer is a bit like prostate cancer that its risk factors are not yet very well understood.”

The study findings were based on seven Australian cohort studies involving 370,000 participants, which enabled the evaluation of less common cancers such as thyroid cancer.

“We linked the data from these seven studies, which all ascertained the participants’ Body Mass Index [BMI] at study baseline, with national cancer and death databases, which allowed us to estimate the strength of BMI-cancer and BMI-death associations during the follow-up,” Dr Laaksonen says.

“We estimated up-to-date prevalence of overweight and obesity in the Australian population from the latest National Health Survey from 2017-2018, and then combined the strength of association and exposure prevalence estimates to estimate population attributable fractions [PAF].

The PAFs describe what fraction of future cancers at the population level is explained by current exposure. We did this by applying advanced PAF  methods which I developed.”

The advanced PAF methods allow for unbiased disease burden estimates, as well as  for the comparison of preventable disease burden by population subgroups in the study. “These methods require access to large cohort data,” Dr Laaksonen says.

As prevalence of overweight/obesity is higher in men than women it adds to the sex difference in thyroid cancer burden.

The aim of the project, which was jointly funded by the National Health and Medical Research Council and the Cancer Institute NSW, was to evaluate for the first time preventable future burden of cancer in Australia and its determinants.

The team involved in this study includes collaborators and representatives of the seven cohort studies on which the study was based on.

They are from various Australian universities, institutes and Cancer Councils.

The data scientist is a member of an international team that has recently received a $550,000 grant from the World Cancer Research Fund to expand the cancer burden analyses internationally.

“This grant is a fantastic opportunity to use my methods to inform global cancer control. Our collaboration includes experts at Cancer Council Victoria, University of Melbourne, University of New South Wales and Harvard University,” she says.

Her next steps include a study on the preventable burden of stomach and oesophageal cancers, and a summary paper on preventable cancer burden in Australia across all cancers.