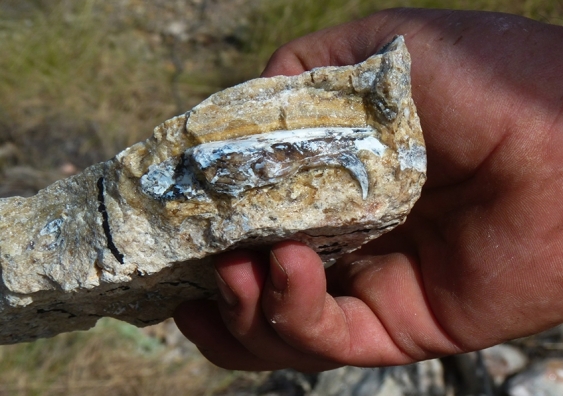 The Riversleigh section of the Australian Fossil Mammal Sites in north-west Queensland – which Sir David Attenborough has described as one of the four most important fossil deposits in the world – is celebrating 25 years of being World Heritage listed.

In 1994, both the Riversleigh section and the Naracoorte section in South Australia were designated World Heritage Areas in recognition of their value as repositories for many of Australia’s most extraordinary extinct megafaunal animals.

To commemorate the milestone, palaeontologists, politicians and natural history enthusiasts are today convening at ‘D-Site’ in the World Heritage Area located in Boodjamulla National Park about three hours’ drive north of Mount Isa.

UNSW Sydney’s Professor Mike Archer, UNSW Professor Suzanne Hand and many colleagues in and associated with UNSW were early pioneers in discovering a paleontological treasure chest of new species of mammals at Riversleigh from the 1970s. 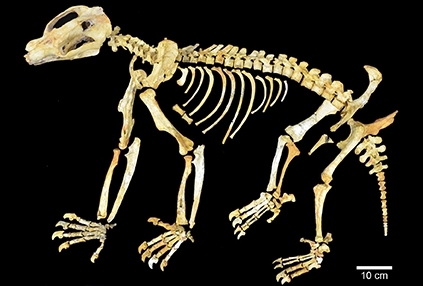 Complete skeleton of a Nimbadon discovered at Riversleigh.

Recently, Professor Archer was sent a letter written by Sir David to be read out during the ceremony to honour Riversleigh’s World Heritage listing. In it, Sir David describes Riversleigh as one of the great wonders of the palaeontological world.

“What other site has produced such an extraordinary assemblage of mammals, birds, reptiles and many other creatures hitherto completely new to science,” Sir David writes.

“Not just one or two species but literally hundreds of them. And not just new but undreamed of. Who would have dared to imagine herds of marsupials the size of sheep grazing in the tree tops while hanging upside down like sloths?”

Professor Archer, who specialises in palaeontology, mammalogy, and conservation biology at UNSW’s School of Biological Earth and Environmental Sciences, says the celebrations mark UNSW being the centre of an extraordinary research project that has involved hundreds of people around the world from 26 institutions and 11 countries. Notable attendees include ESSRC Research Centre Director Professor Suzanne Hand, Dr Troy Myers and Dr Anna Gillespie who both obtained their PhDs researching Riversleigh fossils, and retired research pioneer Mr Henk Godthelp who began research with Professor Archer in 1976 when they were both based in the Queensland Museum.

“Making Riversleigh into a World Heritage Area involved recognition of the enormous importance of these fossil deposits in terms of helping us understand the history of this continent and enabling us to use these fossils to help save Australia’s endangered living animals,” Professor Archer says. 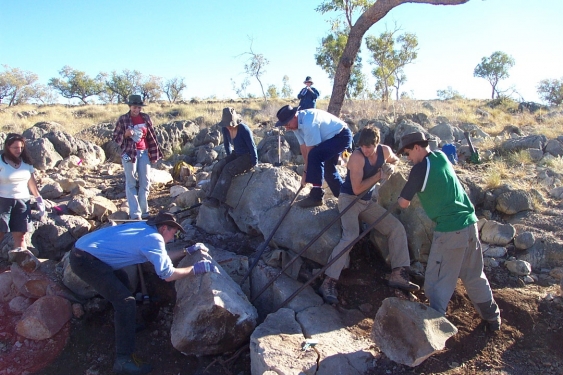 Since intense research began at Riversleigh in 1976, discoveries made there have trebled the number of Australian mammalian species known from the continent that are older than about 2 million years. Hundreds of new species have already been found at Riversleigh – some exquisitely preserved – with more being found every year.

Professor Hand says the freshwater limestone, which sometimes accumulated in caves, has preserved far more than the bones of extinct mammals. 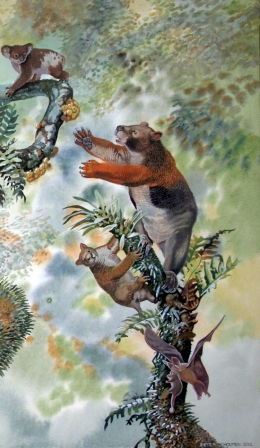 An artist's impression of the Nimbadon. Picture: Peter Schouten

“While the Riversleigh fossils are known for their abundance of new mammalian species, also preserved in great detail were plants, insects, internal organs, soft tissues, and even individual cells – such as 17 million year old sperm cells that amazingly even contain fossilised nuclei,” she says.

Among the many notable animals that have been discovered at Riversleigh are: ‘fangaroos’ – kangaroos with enormous dagger-like canines (Balbaroo fangaroo); carnivorous killer kangaroos (Ekaltadeta ima); giant flesh-eating platypuses (Obdurodon tharalkooschild); dromornithid or ‘thunder birds’, a group that contains one of the largest birds ever known, standing up to four metres tall and weighing half a tonne; possibly Australia’s original drop bears, large tree-dwelling, sloth-like marsupials with huge claws (Nimbadon lavarackorum); and even ‘drop crocs’ –  deep-headed dinosaurian-like land crocodiles from the mekosuchine subfamily that appear to have been able to climb up into trees, perhaps dropping on unsuspecting prey in the lush forests that once dominated this now arid area of the continent.

Riversleigh is one of the great wonders of the palaeontological world.  What other site has produced such an extraordinary assemblage of mammals, birds, reptiles and many other creatures hitherto completely new to science.  Not just one or two species but literally hundreds of them.  And not just new but undreamed of.  Who would have dared to imagine herds of marsupials the size of sheep grazing in the tree tops while hanging upside down like sloths?

These revelations are the more remarkable when it is remembered that the difficulty of preparing Riversleigh specimens is also almost unparalleled.  But that very difficulty has brought its own reward.  It has preserved not just the bones and teeth of these prehistoric animals, but even soft tissues, in fact so perfectly preserved that actual cells can be seen. Astoundingly, even structures within these cells, like the nucleus that once contained the animals’ ancient DNA, have also been recovered from Riversleigh’s rocks.

And just as importantly, Riversleigh’s fossils are making it possible to determine how to save one of the rarest of surviving marsupials, the Mountain Pygmy-possum, a critically endangered alpine marsupial now threatened with extinction because of global warming. Understanding the deep time history of this possum’s lineage recorded in the Riversleigh rocks has now made it possible to devise a strategy by which the surviving species may be saved.  As a result, Riversleigh fossils, while extraordinary in their own right, are now teaching us how to rescue the living.

Will the revelations of Riversleigh ever come to an end?  My bet is there are lots more to come and that the next twenty five years of research into the resources of these World Heritage listed fossil deposits will add far more to Riversleigh’s already extraordinary story.