Affordable power storage is the missing link in the renewable energy revolution. Neeraj Sharma is developing next-generation rechargeable batteries that run on seawater. 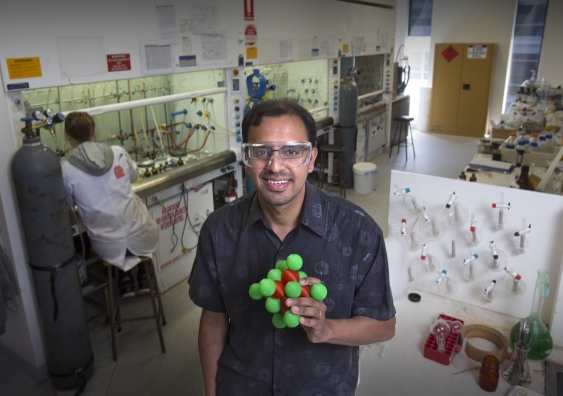 Imagine a future where you can power your home, office and car using solar power, even when it’s dark outside.

With the right storage device this could soon become a reality, and that’s precisely what Dr Neeraj Sharma is working on in his lab at UNSW’s School of Chemistry.

“You can have the best solar cell in the world, but if the sun’s not shining, it’s not going to produce any energy,” explains Sharma. “But if you couple that solar cell with the right battery, then you can produce a constant energy output.”

Not content with simply making a more powerful battery, he’s taken things a step further, and is using non-toxic, environmentally friendly materials to create the device. In fact, his batteries may one day run on nothing but seawater.

We’re essentially producing a way to get people off fossil fuels.

Presently, lithium-ion batteries power our phones and laptops. These batteries move charged lithium atoms, or ions, between positive and negative electrodes – a process that either releases or stores energy depending on the direction those ions are travelling.

Lithium-ion systems work well and have prompted some significant research and development investment from heavyweight companies. In 2015, Tesla and Panasonic both unveiled lithium-ion batteries for residential energy storage. The sleek Powerwall unit, developed by Tesla, is already on sale in Australia and costs an estimated A$9,500 (including installation).

Despite progress, many researchers consider the batteries far too expensive to be used on the scale needed to store renewable energy in the home, or on a commercial or community scale – and alternatives such as lead acid batteries are heavy and inefficient.

So Sharma is taking a different tack. The UNSW chemist is working on replacing the lithium with sodium, in the form of readily available salty water. “Once you get the sodium batteries as efficient as lithium-ion batteries, they’ll be about one-fifth the cost,” he says.

That means they’ll be affordable enough for households and communities to buy and link up to use as renewable energy sources year-round.

To make a simple sodium battery, you need to stick two electrodes into seawater. The challenge is making that battery more sophisticated.

Sharma is doing so by tweaking these electrodes at the structural level, so the battery can provide eight to ten hours of constant electricity.

“Sodium ions are a bit bigger and harder to pull in and out than lithium, so we have to design an electrode material that has more space,” says Sharma. “It’s visualising this process that’s our area of expertise. And we can use that information to build better electrodes.”

Energy is a massive challenge for humankind. If we can control the chemistry to make a better battery, it would make renewable energy more affordable and reliable.

His team visualises the battery in action at the atomic level by shooting X-rays or neutrons at them using powerful machines housed at the Australian Synchrotron and the Australian Nuclear Science and Technology Organisation (ANSTO).

Thanks to this ability, the team has already made significant improvements with its positive electrode, or cathode, and has it performing just as well as a modern lithium-ion battery.

They’re now working on getting their negative electrode, or anode, up to scratch.

Once this is done, Sharma believes the battery could be the key to providing the entire world – including developing regions – with cheap, sustainable electricity.

“Energy is a massive challenge for humankind. If we can control the chemistry to make a better battery, it would make renewable energy more affordable and reliable,” says Sharma. “We’re essentially producing a way to get people off fossil fuels.”

An Australian Institute of Nuclear Science and Engineering fellow, Sharma is one of the emerging research leaders featured in the latest edition of Research@UNSW: 20 rising stars who will change our world.

For more go to 20risingstars.unsw.edu.au