Predator exposure can help vulnerable species survive in the wild

Bilbies vs. feral cats – a Hunger Games-style experiment conducted in a South Australian desert has produced fascinating results with important implications for the conservation of our endangered species. 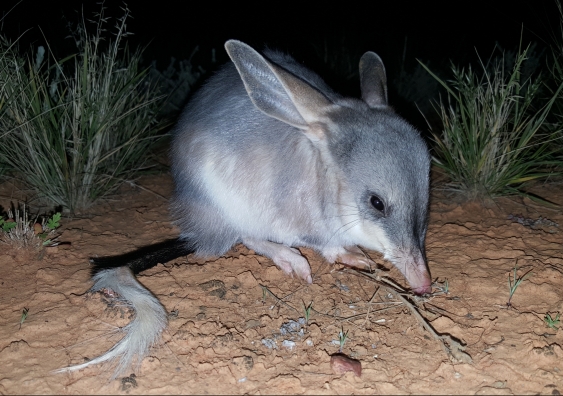 Exposing vulnerable species like the bilby to an environment with predators before releasing them into the wild could help improve the species’ ultimate survival, new research by UNSW ecologists has shown.

In their study – published today in the Journal of Applied Ecology –  the ecologists compared the behaviour and subsequent survival of two groups of bilbies from different scenarios: a group that had been deliberately exposed to  feral cats, and a group that had not come into contact with predators before.

The study is the first experimental test of predator exposure that shows how the fate of animals that are introduced into a predator‐rich environment could be improved by prior experience living with predators.

“Deliberately exposing threatened species to feral cats in a wild setting is risky but our research suggests that it leads to a significant improvement in anti-predator behaviour and survival,” says Dr Katherine Moseby, who initiated the project.

The team—from UNSW, Arid Recovery and UCLA—conducted the experiment in the Arid Recovery Reserve – a 123 km2 network of fenced exclosures in arid South Australia. Several locally extinct species have recently been re‐introduced into the Reserve, including the vulnerable greater bilby. In 2016, the Reserve had a population of about 500 bilbies.

“The reserve is divided into paddocks, and we conducted the experiment in three paddocks: the predator‐free paddock, the predator‐exposed paddock, and the release site,” says lead author Aly Ross, a PhD candidate at the Centre for Ecosystem Science at UNSW.

“First, we compared the behaviour of bilbies from the predator‐free and predator‐exposed populations in a small fenced pen of a bit over 50 m2 – primarily to see how they’d react to a new environment,” says Ms Ross.

The team found that the behaviour of the animals that had previous predator exposure differed from the predator ‘novices’.

“Animals that had lived in an environment with predators moved less and sought cover more quickly,” says Ms Ross.

“This shows that they were warier of potential threats, whereas the predator-free group of bilbies showed fewer signs of predator awareness.”

The fact that animal behaviour can be changed by predator training has been demonstrated before – it’s what the group found next that is particularly interesting.

“Unfortunately, we found that 71% of the predator‐free bilbies died in the week after release, but only 33% of the predator‐exposed bilbies met the same fate – showing that the bilbies who had been exposed to the very real threat of predators already had benefitted from that experience.”

The findings have important implications for the conservation of native animals and programs that seek to reintroduce species like the bilby.

“Isolating threatened animals from introduced predators on islands or inside fenced reserves exacerbates the issue of prey naivety. We are advocating for a different approach whereby threatened species are exposed to these predators in the wild under controlled conditions.”

The research provides evidence that predator exposure improves survival in the first 40 days following translocation, and thus that in situ predator training may give predator-naïve species a vital edge that increases the chance of creating a sustainable population in areas with some predators.

“Our research shows that it is possible to make ‘better’ prey species, because ultimately if native animals are to survive in the wild they need to be able to tolerate the threat posed by introduced predators,” says co-author Professor Mike Letnic.

Katherine Moseby agrees: “Although it may take decades or even centuries for our native species to develop the skills they need to combat feral cats and foxes, we need to be working towards that co-existence now.”

The greater bilby is a nocturnal marsupial native that once roamed over 70% of the Australian mainland.  Today, the bilby is listed as vulnerable globally and nationally, with predators – mainly feral cats and foxes –thought to be largely responsible for their continuing decline. With advances in conservation research, including live predator exposure, they just might bounce back from the brink.

This project was funded through an ARC Linkage Grant.