There is no bolder idea than quantum computing, said Prime Minister Malcolm Turnbull, hailing UNSW's research in the transformative technology as the “best work in the world".

"There is no bolder idea than quantum computing," said Prime Minister Turnbull, hailing UNSW's research in the transformative technology as the “best work in the world".

He praised the leadership of Scientia Professor Michelle Simmons, director of the Australian Research Council Centre of Excellence for Quantum Computation and Communication Technology (CQC2T) and congratulated the centre's team on their research breakthroughs.

"You're not just doing great work, Michelle, you're doing the best work in the world.

"You're not just solving the computing challenges and determining the direction of computing for Australia, you are leading the world and it is a tribute to your leadership, your talent ... that you've attracted so many outstanding scientists and engineers from around the world,” Mr Turnbull said.

"This is a very global team and it's right here at the University of New South Wales.”

@UNSW are leading the world in quantum computing. It's not just a great position to be in, it's a superposition! https://t.co/Q7hk6qNCKd

The laboratories will double the productive capacity of the UNSW headquarters of the CQC2T.

They will also be used to advance development work to commercialise UNSW’s ground-breaking quantum computing research and establish Australia as an international leader in the industries of the future. The work has attracted major investment from the Australian Government, the Commonwealth Bank of Australia and Telstra.

CQC2T is leading the international race to build the world’s first quantum computer in silicon.

The new laboratories, which have been funded by UNSW, will house six new scanning tunnelling microscopes, which can be used to manipulate individual atoms, as well as six cryogenic dilution refrigerators that can reach ultra-low temperatures close to absolute zero.

“The international race to build a super-powerful quantum computer has been described as the space race of the computing era,” said Professor Michelle Simmons.

“Our Australian centre’s unique approach using silicon has given us a two to three-year lead over the rest of the world. These facilities will enable us to stay ahead of the competition.” 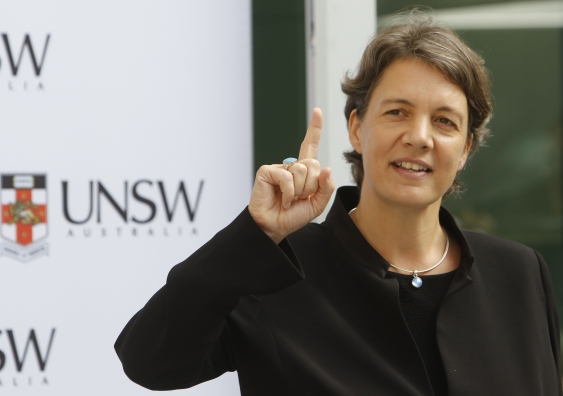 The new labs will also be essential for UNSW researchers to capitalise on the commercial implications of their work.

In December 2015, as part of its National Innovation and Science Agenda, the Australian Government committed $26 million towards a projected $100 million investment to support the commercial development of UNSW’s research to develop a quantum computer in silicon.

Following the Australian Government’s announcement of support, the Commonwealth Bank of Australia and Telstra each pledged $10 million for the development of a ten-qubit prototype. This prototype will be partly designed and built in the new facility.

“In addition to our fundamental research agenda, we now have an ambitious and targeted program to build a ten-qubit prototype quantum integrated circuit within five years,” said Professor Simmons. “By mapping the evolution of classical computing devices over the last century we would expect commercial quantum computing devices to appear within 5-10 years of that milestone.”

It is a prospect strongly endorsed by UNSW President and Vice-Chancellor Professor Ian Jacobs.

“UNSW is committed to supporting world-leading research, and quantum computing is a key part of our future strategy. We are excited by the opportunities these new laboratories provide us to work jointly with industry and government.

“Our hope, long term, is that this will one day establish Australia as an international leader in one of the key industries of the future,” Professor Jacobs said. 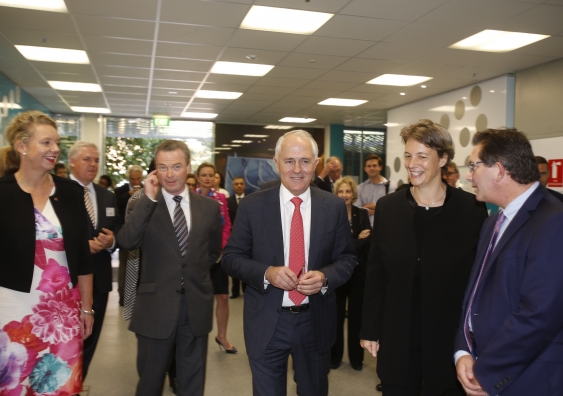 “In today’s world everyone relies increasingly on computers from those in the palm of our hand to the computers on our desk. Quantum computing is set to increase the speed and power of computing beyond what we can currently imagine. This is still some time in the future, but the time for investment is now. This type of long-term investment is a great example of how collaboration between universities, governments and industry will benefit the nation and our economy, now and into the future.”

Kate McKenzie, Telstra Chief Operations Officer, said that the opening of the new CQC2T laboratories was a significant milestone for science and innovation in Australia.

“In December 2015 we announced our proposed $10 million investment to help with development of silicon quantum computing technology in Australia with CQC2T. It’s an important part of Telstra’s commitment to help build a world class technology nation,” Ms McKenzie said.

“Quantum computing has huge potential globally, so I’m delighted to be here today to see this dynamic, world-leading program.”

The UNSW-based ARC Centre of Excellence for Quantum Computation and Communication Technology is leading the global race to build the world’s first quantum computer in silicon.

In 2012, a team led by Professor Simmons, of the Faculty of Science, created the world’s first single‑atom transistor by placing a single phosphorus atom into a silicon crystal with atomic precision, achieving a technological milestone ten years ahead of industry predictions. Her team also produced the narrowest conducting wires ever made in silicon, just four atoms of phosphorus wide and one atom high.

In 2012, researchers led by Professor Andrea Morello, of the Faculty of Engineering, created the world’s first qubit based on the spin of a single electron on a single phosphorus atom embedded in silicon.

In 2014, his group then went on demonstrate that these qubits could be engineered to have the longest coherence times (greater than 30 seconds) and highest fidelities (>99.99%) in the solid state.

In 2013, Scientia Professor Sven Rogge, of the Faculty of Science, demonstrated the ability to optically address a single atom, a method that could allow the long-distance coupling of qubits.

And in 2015, researchers led by Scientia Professor Andrew Dzurak, of the Faculty of Engineering, built the first quantum logic gate in silicon – a device that makes calculations between two qubits of information possible. This clears one of the critical hurdles to making silicon-based quantum computers a reality.

UNSW welcomes announcement of Minister for Cities and the Built Environment