How we react to the greatest challenge of our generation is all in the mind. Ben Newell explains. 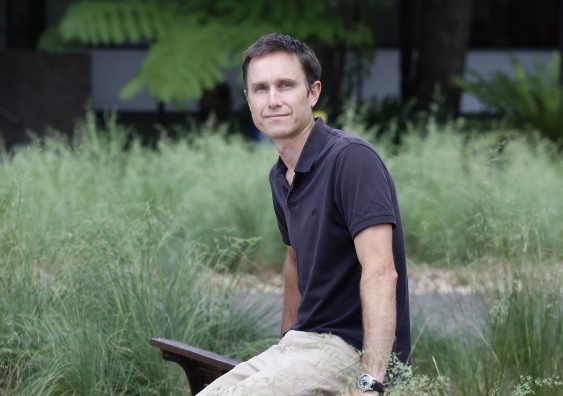 Professor of Cognitive Psychology Ben Newell is a Future Fellow in the School of Psychology. Photo: Grant Turner/Mediakoo

Climate change has been labelled the greatest challenge of our time. But it could also be our greatest opportunity because it gives us the chance to change the way we think, the way we act and the way we work together.

But to seize that opportunity we need to overcome barriers within our own minds. These psychological foibles have the power to impede our ability to think about our future selves and lead us to be “stuck” in the here and now.

The ‘psychological distance’ of climate change

In a paper forthcoming in the Journal of Environmental Psychology my colleagues Rachel McDonald, Hui Yih Chai and I explore the construct of psychological distance as a means of understanding our reactions to climate change.

Psychological distance is a well-established construct referring to the extent to which an object is removed from the self. It might seem strange to think of climate change as an “object” – but in this context it refers to all of the thoughts, feelings and reactions we might have when we think about the problem of climate change.

A large body of literature now documents the efforts of various industries and lobby groups in raising doubt about the basic science of global warming. The fact 97% of currently active, publishing climate scientists endorse the claim that the globe is warming, largely due to human activity, appears to do little to discourage these hardline deniers.

This seed of doubt can be enough, for some of us, to dismiss climate change as nothing to worry about.

When is climate change going to happen?

Many climate scientists argue the effects of serious climate change are already being seen and felt. But it can be hard for us to distinguish between short-term fluctuations in the weather and long-term changes in the climate.

The imperfection of memory and the difficulty in picking up signals from noise can make climate change appear a long way off.

Where is climate change going to happen?

Even if we think climate change is real and will happen at some point, we can still attempt to psychologically distance ourselves by imagining it will only happen in other (far-off) places – such as the low-lying Pacific islands, or the Arctic Circle.

Such reasoning belies the interconnectedness of a global phenomenon like climate change. Out of sight might be out of mind, but it does not diminish the reality of the widespread impacts of climate change.

Will climate change happen to me?

If one accepts the reality, imminence and relative locality of climate change impacts, one might still distance oneself personally from those impacts. That is, treat them as socially distant.

“It won’t happen to me” – perhaps I’ll be able to move, or build a wall, or buy a better air conditioner. This kind of thinking can again insulate us – distance us – from the required sense of urgency and the need to act now to reduce CO2 emissions.

One solution appears to be getting us to think of our future selves, our legacy. Recent work by Elke Weber and colleagues at Columbia University, shows how inviting people to think about ways in which they would have a positive impact on future generations leads to stronger belief in climate change, and greater pro-environmental intentions.

To seize the opportunities climate change offers we must first dispel any uncertainty about its reality – close the hypothetical distance – and then focus on the things we can do NOW, not for our immediate gain, but for the benefit of our future selves.