One of the Murray-Darling Basin’s most important wetlands, the Macquarie Marshes, has become drier during the past 20 years, leading to severe loss of ancient red gum trees and invasion of terrestrial plants, two new UNSW studies have revealed. 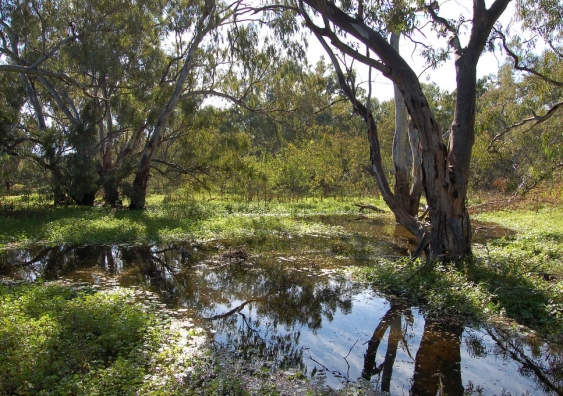 One of the Murray-Darling Basin’s most important wetlands, the Macquarie Marshes, has become drier during the past 20 years, leading to severe loss of ancient red gum trees and invasion of terrestrial plants, two new UNSW studies have revealed.

The current drought, the development of dams, and the diversion of water for agricultural irrigation are the main causes of the drying. However, the drying will be exacerbated by future climate change, with this south-eastern region of the continent predicted to have less rainfall.

“The Macquarie Marshes is a Wetland of International Importance under the Ramsar Convention. But our research shows the Marshes, which provide vital habitat for millions of water birds, are progressively drying out,” says Director of the UNSW Centre for Ecosystem Science Professor Richard Kingsford, an author on both papers.

“The plants tell the story: river red gums have died in large numbers in some areas and the reeds and other aquatic plants that used to be wet most of the time are not receiving as much flood water as before.”

In one of two studies by the UNSW Centre for Ecosystem Science, researchers led by Dr Gilad Bino analysed the way vegetation communities such as reed beds, river gum forests and semi-permanent wetlands in the Macquarie Marshes Nature Reserve changed between 1991 and 2008.

The results will be published in an upcoming issue of the Journal of Applied Ecology.

“The patterns are very clear. The drier floodplain vegetation is moving into the wetter areas, while the very wet areas are shrinking. And we are even seeing terrestrial plants invade the wetland,” says Dr Bino.

In the second study, researchers led by UNSW’s Katherine Catelotti investigated changes in the condition of 212 red river gums which were repeatedly monitored from 1993 until 2012, after the Millenium drought broke in 2009.

The results are published in the international journal Biological Conservation.

“We found nearly half – 44 percent – of the river red gums that were alive and healthy in the 1993 were dead by 2012, despite the widespread flooding at the end of this period,” says Ms Catelotti.

An analysis of the frequency of the floods showed that that survival of the trees was highly dependent on their receiving a flood at least every four years.

The study also showed that river red gum forests can partially recover with increased flows of water, which has clear implications for the management of environmental flows to the Macquarie Marshes.

“This is unequivocal evidence that governments were right in investing in the buy-back of environmental flows. If we had done it sooner, then we may not have lost so many ancient trees in the Macquarie Marshes,” says Professor Kingsford.

“There are also significant challenges in the future, given we know that south-eastern Australian temperatures are rising and there is less rainfall predicted. Iconic biodiversity hotspots such as the Macquarie Marshes are particularly vulnerable,” says Professor Kingsford.

The changes observed in the studies are likely to be widespread across the regulated rivers of the Murray-Darling Basin.