The transition from heavy traffic to complete gridlock follows the same quantifiable pattern in cities around the world, a study from UNSW and University of California Berkeley has found. 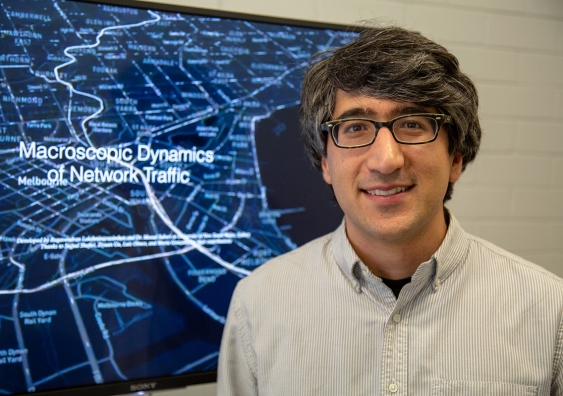 In a paper to be published in today’s PNAS journal by UNSW’s Dr Meead Saberi in collaboration with University of California Berkley’s Marta Gonzales, data from six major global cities was analysed to discover whether there were recognisable patterns to the development of a traffic snarl.

Dr Saberi, who is senior lecturer in UNSW's School of Civil and Environmental Engineering, said as recovery time passed the critical threshold where cars using the network outweighed the network’s full capacity, traffic started to move beyond congestion to network collapse, or gridlock.

“We have found that this simple "recovery time" measure is directly related to demand and supply. No surprise,” Dr Saberi said.

“What is surprising is that all the six cities that we have studied perform similarly.”

In other words, despite the various differences between cities in topography, population size, infrastructure, demand and other characteristics particular to each city, transition to gridlock happens in every city in a similar fashion.

The point when this transition happens may be unique to each city, but the researchers now have a quantifiable measure for it.

“The demand over supply ratio that we have measured is the ratio of the vehicle kilometres travelled in a city to the total vehicle distance the road network can support per hour,” Dr Saberi said.

“When this ratio exceeds a critical value, we see transition to gridlock. For example, a major global city like London may have a smaller critical value and that’s why it sees gridlock more often than, say, a smaller city like Adelaide.”

Transport authorities and governments could use the findings to understand when and how traffic forms and how likely it could develop into network collapse. Monitoring the number of vehicles entering the network and the recovery time could provide an early indication of whether a gridlock is likely to happen or not.

“This information can be used to intervene in the network by managing travel demand or increasing transport supply when and where needed.”

Dr Saberi said the researchers would like to follow up the study by looking at other patterns of the ‘spreading phenomenon’ that traffic congestion may follow.

“The next step is to go totally out of the box and use methods in public health, such as those to track how infectious diseases spread around the world, to monitor and predict traffic.”

Traffic jams are contagious. Understanding how they spread can help make them less common

Look up, Australia, cable cars could ease our traffic woes