Fossil remains of a previously unknown family of carnivorous Australian marsupials that lived 15 million years ago have been discovered at the Riversleigh World Heritage Fossil Site in north-western Queensland. 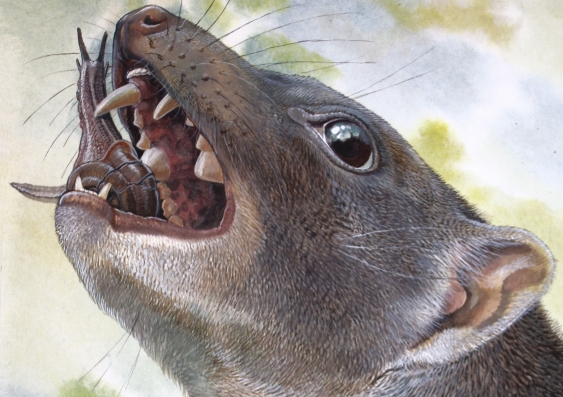 An artist's illustration of 15 million-year-old Malleodectes from Riversleigh, chomping down on what appears to have been its favourite food—snails. The massive, shell-cracking premolar tooth is visible in the open mouth. Illustration by Peter Schouten

Fossil remains of a previously unknown family of carnivorous Australian marsupials that lived 15 million years ago have been discovered at the Riversleigh World Heritage Fossil Site in north-western Queensland by a UNSW Australia-led team of researchers.

“Malleodectes mirabilis was a bizarre mammal, as strange in its own way as a koala or kangaroo,” says study lead author UNSW Professor Mike Archer.

“Uniquely among mammals, it appears to have had an insatiable appetite for escargot—snails in the whole shell. Its most striking feature was a huge, extremely powerful, hammer-like premolar that would have been able to crack and then crush the strongest snail shells in the forest.”

Research describing the ferret-sized new marsupials is published in the journal Scientific Reports.

Isolated teeth and partial dentitions of this unusual group, known as malleodectids, had been unearthed over the years at Riversleigh, where Professor Archer and his colleagues have excavated for almost four decades. But the profoundly different nature of the marsupials was not realised until a well-preserved portion of the skull of a juvenile was found in a 15 million year old Middle Miocene cave deposit at Riversleigh.

This juvenile specimen was only recently extracted from its limestone casing, using an acid bath at UNSW, which made it available for study with modern techniques including micro-computed tomography. The young animal still had its baby teeth, and was teething, with adult teeth that had been about to erupt when it was alive still embedded in its jaw.

Although it is very different from the others, it appears to have been related to the dasyures – marsupial carnivores such as Tasmanian Devils and the extinct Tasmanian Tigers.

“Details of the canine, premolar and molar teeth of this specimen have enabled its relationships to other Australian marsupials to be determined with reasonable confidence,” says Professor Archer, of the ESSRC Research Centre in the UNSW School of Biological, Earth and Environmental Sciences.

“Although it is very different from the others, it appears to have been related to the dasyures – marsupial carnivores such as Tasmanian Devils and the extinct Tasmanian Tigers that are unique to Australia and New Guinea.”

Nothing remains of the cave at Riversleigh, known as AL90 site, except its limestone floor, which contains the bones of thousands of animals that fell into, or lived in, the ancient cave.

“The juvenile malleodectid could have been clinging to the back of its mother while she was hunting for snails in the rocks around the cave’s entrance, and may have fallen in and then been unable to climb back out,” says team member UNSW Professor Suzanne Hand.

“Many other animals that lived in this lush forest met a similar fate with their skeletons accumulating one on top of another for perhaps thousands of years, until the cave became filled with palaeontological treasures.

“Over millions of years the walls and ceiling of the cave were eroded away, leaving only the fossil-rich floor, which was discovered by our Riversleigh Project team members in 1990.”

Subsequent quarrying of the cave floor has produced thousands of exquisite fossils including the articulated skeletons of the ram-sized, sloth-like Nimbadon – an extinct marsupial that fell in while moving overhead in the tree tops.

The Riversleigh World Heritage fossil deposits, which span the last 24 million years of Australian history, have produced many previously unknown kinds of animals such as Thingodonta, which may have been a woodpecker-like marsupial; Fangaroo, a tusked kangaroo; Drop crocs, which are strange leopard-like crocodiles that may have been arboreal; and Dromornis – the Demon Duck of Doom, which was one of the largest birds in the world.

The Riversleigh Project, which has been a major focus of the palaeontological team at UNSW, is about to carry out its 40th annual expedition to Riversleigh.

Once again, the team expects to discover yet more strange creatures that once populated Australia’s ancient rainforests at a time when the northern regions of the continent looked more like Amazonian rainforests than the arid zone the area has become today.

Of particular interest for this year’s expedition will be younger apparently Late Miocene rocks discovered by the team, assisted by funding from the Australian Research Council and the National Geographic Society, in a remote area now called “New Riversleigh”. These will fill a key time period for the rich, long record of environmental change at Riversleigh.

Among the first tantalising discoveries from “New Riversleigh” has been yet another bizarre, hyper-carnivorous marsupial that looks like it might be a younger, far more powerful cousin of the earlier snail-eating malleodectids.

Like so many of the strange creatures continuously being discovered in Riversleigh’s rocks, malleodectids went extinct long before humans arrived.

The most probable cause was a severe interval of climate change that began about 15 million years ago and ultimately transformed Australia’s once widespread, animal-rich rainforests into the more open forests and grasslands of today.

“This climate change-driven transformation in Australia’s wildlife over the last 15 million years is a timely reminder of the probable outcome of the next cycle of climate change, one we appear to have triggered ourselves,” says Professor Archer.