In 2017 18.8 million people were displaced by natural disasters, with floods accounting for 8.6 million. Climate change is poised to drive those numbers higher still. 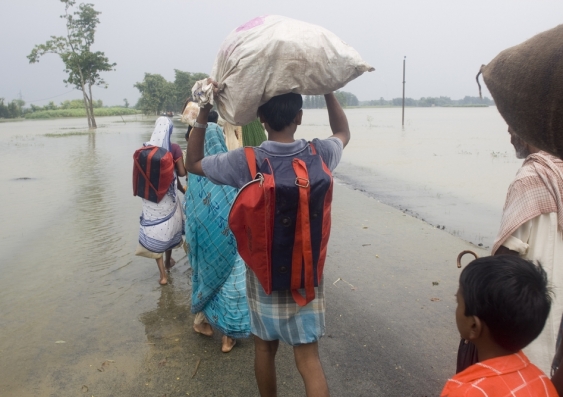 Sea-level rise is already threatening some communities around the world, particularly small island states, as it exacerbates disasters resulting from storm surges and flooding.

If greenhouse gas emissions continue unabated, by 2100 the world could see sea-level rise of a metre – or even more if there is a larger contribution from the Antarctic ice sheet, as some recent findings suggest.

Even without a larger Antarctic response, the rate of rise at the end of the 21st century for unmitigated emissions is likely to be equivalent to the rate of rise during the last deglaciation of the Earth, when sea level rose at more than a metre per century for many millennia. For all scenarios, sea-level rise will continue for centuries to come.

Without significantly more effective mitigation than currently planned, the rise will ultimately be many metres, or even tens of metres – the question is not if there will be large rises, but how quickly they will happen.

Forcing people from their homes

As well as causing seas to rise, climate change may also increase the severity of events like cyclones and rainfall, which may force people from their homes in many regions.

Global statistics on the risk of disaster displacement were not systematically collected until 2008, but already they offer stark figures. In 2017, 18.8 million people were internally displaced by natural disasters, with floods accounting for 8.6 million. By contrast, 11.8 million were displaced by conflict. Many more people are displaced each year by disasters than by conflict. Climate change intensifies this risk.

Roughly 100 million people live within about a metre of current high tide level. (Double these numbers for a five-metre sea-level rise, and triple them for 10 metres.)

Many of the world’s megacities are on the coast and vulnerable to sea-level change. Without adaption, it is estimated that by 2100 some of these areas will flood, displacing in the order of 100 million people.

While the vast majority of those people will never cross an international border, some will – and their legal status will be precarious because they will not qualify as refugees under the UN Refugee Convention (people with a well-founded fear of being persecuted for reasons of race, religion, nationality, political opinion or membership of a particular social group).

In the current political climate, governments are reticent to create a new legal status for such people, and it would be difficult to encapsulate the complexity of climate change and disaster-related movement in a treaty definition anyway. Many factors drive people to leave their homes – such as poverty, resource scarcity and lack of livelihood opportunities – but climate change becomes the straw that breaks the camel’s back.

The most effective way to reduce the number of displaced people is strong global mitigation of emissions. In Australia, a successful NEG policy that included emissions reduction would cover about a third of Australia’s emissions. Mitigation policies also need to be developed to cover all emission sectors.

However, even with strong mitigation, adaptation will be essential. The evidence tells us that most people want to remain in their homes for as long as they can, and to return as quickly as possible. We therefore need laws and policies that permit people to remain in their homes where possible and desirable; that enable them to move elsewhere, before disaster strikes, if they wish; and to receive assistance and protection if they are displaced.

Good policy is essential. Studies of floods in Bangladesh showed that when people received prompt and adequate assistance, they were more likely to stay and rebuild than to move on in search of work to survive. By contrast, a year after Typhoon Haiyan struck the Philippines, tens of thousands of people remained displaced because the authorities said it was unsafe to go home but could not offer any alternative. This is likely to be a growing challenge with on-going climate change.

We are going to see more and more climate related disasters. We can do better in the way we prepare for and respond to them. The nature and timing of policy interventions will be crucial in determining outcomes after a disaster, because together they affect people’s ability to cope and be resilient. We need a broad, complementary set of policy strategies to assist people and give them choices.

On Thursday 24 August Jane McAdam and John Church will join Walter Kaelin to talk on Good Evidence, Bad Politics. This event is free to the public.