Opinion River on fire: even if it’s not coal seam gas we should still be concerned

Even if the gas seeps at the Condamine River are natural, the resulting confusion and debate highlights the need for more information about how gas exploration affects our precious water resources, write Bryce Kelly and Charlotte Iverach. 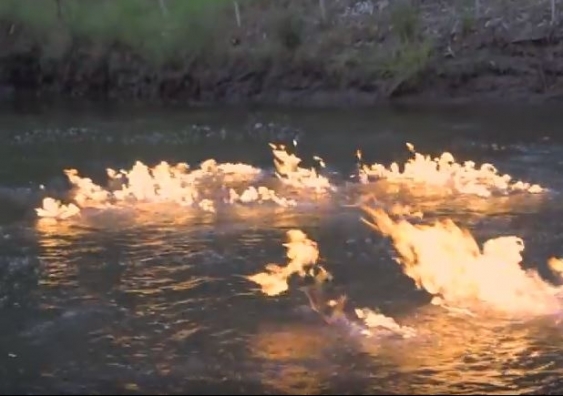 Ignited methane gas from the seep on the Condamine River. Screenshot from Jeremy Buckingham/YouTube

CSIRO researchers, who have been researching the Condamine since 2012, have stated that the gas seep is unlikely to be due to CSG production.

Methane contributes to global warming but is harmless to people except at extremely high concentrations. The bigger problem raised by the Condamine River gas seep is the impact of CSG on groundwater, a resource on which many people in the region depend.

Even if the gas seep is natural, it suggests that we do not know enough about how gas exploration could affect this precious resource.

For millions of years, methane gas has seeped from oil and gas deposits and coal measures, particularly in areas of major geological faulting. In fact, many of the early oil and gas fields began at or next to natural gas seeps.

The Condamine River begins in Queensland and ultimately joins the Murray-Darling. It flows through what is known as the Surat Basin, a geological region that holds major deposits of coal, oil and gas.

The river flows over groundwater that is used to supply irrigation, stock and domestic water. This groundwater, called the Condamine River Alluvial Aquifer, overlies a coal deposit known as the Walloon Coal Measures. This has been exploited for coal and, more recently, for the CSG that resides within it.

In 2012, the Queensland government found that the chemistry of the gas from the Condamine River gas seep is consistent with a source in the Surat Basin.

No CSG production or exploration has occurred within 1.4 km of the Condamine River gas seep. This suggests that CSG is not responsible.

Methane gas is buoyant, and when released at depth it will generally rise vertically through the earth. Where a coal or CSG exploration or production well is vertical, methane gas leakage measured at the ground surface is usually contained to within tens to a few hundred metres of the well.

Methane can move horizontally, but only when there are geological structures that force it to move laterally. Gas can migrate many kilometres through dipping geological layers and networks of geological faults. This is common with conventional gas reservoirs kilometres below the Earth’s surface.

But coal seams under the Condamine River are relatively shallow, so gas is unlikely to move horizontally more than a few hundred metres from a CSG well.

Gas bubbles on the bed of the Condamine River a short distance from the main gas seep. Bryce Kelly, Author provided

Methane in the coal seam can also be mobilised by changes in the weight of the earth above it, particularly movement of water. Groundwater extraction lifts weight off the Walloon Coal Measures, while floods increase the weight. The interplay of groundwater use and flooding effectively pumps the system and mobilises trapped gas. This gas slowly migrates to the ground surface.

The Condamine River is also not the only place in the region where methane is likely naturally seeping upwards from the Walloon Coal Measures.

But the case is not closed over whether the Condamine River gas seep is natural.

Throughout Queensland there are hundreds of poorly documented coal and groundwater exploration wells. These were drilled last century before the creation of rigorous regulations.

In April 2016, we mapped gas leaking from the site of a presumably abandoned leaking coal exploration well just 2.5 km north of the Condamine River gas seep.

We measured maximum methane concentrations of 595 parts per million (ppm) (the lower explosive limit of methane in air is 50,000 ppm). By contrast, the average natural background concentration of methane for the region is 1.79 ppm. The continuously high concentration indicates that there is a direct path between the coal measures and the ground surface.

If there is a similar poorly documented abandoned well closer to the Condamine River it could account for the gas seeps being reported.

Given that there are hundreds of these abandoned exploration wells in Queensland and an unknown number in the Chinchilla region, only further field mapping and searching of historical documents could definitively exclude the presence of an abandoned coal exploration well.

Whether natural or an abandoned exploration well, the Condamine River gas seep is a concern because it suggests that we do not know enough about the groundwater system in the region.

CSG production requires the extraction of large volumes of water to depressurise the coal seam and shift methane so it can be recovered. Over decades the zone of depressurisation will extend away from the gas production well and slowly depressurise nearby areas.

To understand fully the impact of CSG production, we need to know if there are connections between the coal measures targeted for gas extraction and the groundwater used by people and groundwater-dependent ecosystems.

To date, only 17 out of hundreds of geological faults and no abandoned leaky wells have been incorporated into the regional groundwater model used to assess the impact of CSG production. Depending on CSG production and groundwater use, these could conceivably one day play a role in lowering the groundwater levels of the Great Artesian Basin and the Condamine River.

The only way to understand how CSG is affecting groundwater is to account for abandoned wells and other geological structures in groundwater flow models.

The gas seeps at the Condamine River may indeed be natural. The fact that there is so much confusion and debate about it highlights the need to provide the public with high-quality, scientifically defensible information.

Some good data have been collected, but we must expand groundwater monitoring throughout the region, and improve our mapping of gas seeps to determine the source of the gas. Without a comprehensive picture of the region, we cannot properly assess the long-term impact of CSG production.

The research described in this article is part of a collaboration between UNSW Australia, ANSTO, and Royal Holloway University of London.

Australia’s coal mines are pouring methane gas into the atmosphere