Australia’s first payload of scientific experiments blasts off for the International Space Station in November, thanks to a group of high schoolers and UNSW space entrepreneur Solange Cunin. 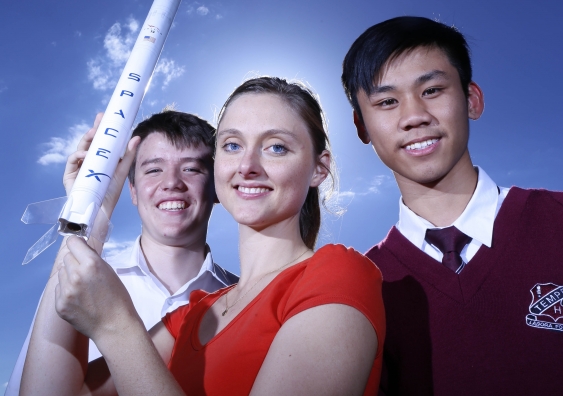 The kicker: these experiments won’t be confined to their western Sydney classroom. Instead, they’ll be part of Australia’s first cargo package delivered to the International Space Station (ISS). If all goes to plan, the payload, smaller than a shoebox, will launch in November aboard a SpaceX Falcon 9 rocket from Cape Canaveral, Florida. The experiments will be tested by NASA astronauts and then run on the ISS over several weeks.

“Our students are ridiculously excited,” says Bauer, the school’s innovation and STEM coordinator. “It’s the ultimate opportunity. There’s nothing that can actually mirror this project.”

The “project” Bauer is referring to is the Quberider Space Program. Quberider is a STEM-education start-up co-founded by fifth year UNSW aerospace engineering and maths student Solange Cunin. Its aim is to get students excited about science, maths and technology by giving them a space mission.

This is actually the first Australian-owned payload to go to the International Space Station. It’s a monumental achievement for Australia and it’s being driven by a bunch of 14- and 15-year-olds.

So far, 40 schools and close to 1,000 students, mostly in New South Wales, are participating in the inaugural program.

“This is actually the first Australian-owned payload to go to the International Space Station,” says Cunin. “It’s a monumental achievement for Australia and it’s being driven by a bunch of 14- and 15-year-olds.”

Cunin, who grew up staring at the night sky on her parent’s eucalyptus plantation in northern NSW, has long been fascinated by space, and was thrilled when she received her first telescope as a Christmas present, more than a decade ago.

In early 2015, while at UNSW, she teamed up with a friend named Sebastian Chaoui to form Quberider.

The self-professed “space geeks” envisioned a future where access to space was commonplace and not dominated by space agencies or big corporations. Quberider was initially formed as a ride-sharing service – a way to lower the cost of launching small-scale payloads and software-based experiments into space. But along their start-up journey, they discovered a more fundamental problem: a massive gap in technical skills, and a lack of motivation for engaging with space in Australia – the only OECD country that still lacks a space agency.

Changing course slightly, the entrepreneurs decided to address the problem at its root. They began developing an innovative education program to teach high school kids to code, collect and analyse data, and develop creative solutions.

“These are 21st century skills major industries are demanding, but they haven’t really been incorporated into the school curriculum yet,” says Cunin. 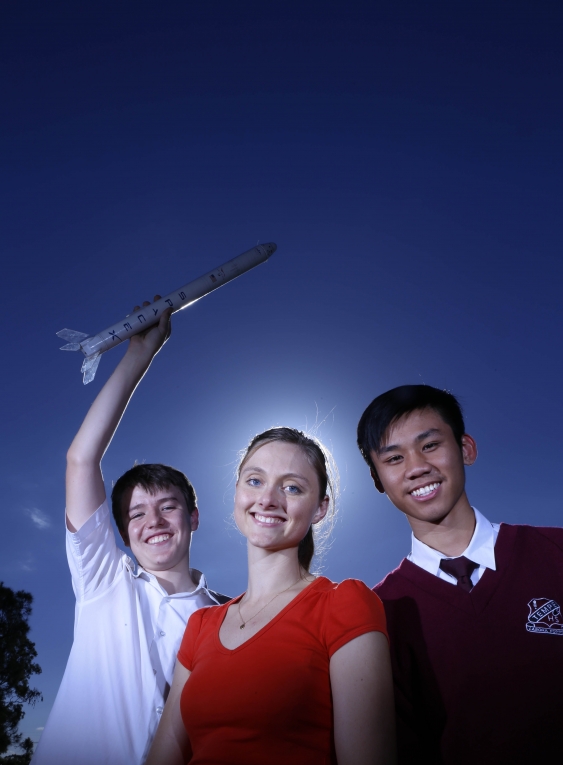 In early 2016, Quberider was accepted into a Telstra-backed accelerator program, muru-D, which invests in technology start-ups. The Sydney-based accelerator allowed the business to continue expanding its educational space program, which launched just as Australia’s performance in maths was under fire.

In March, the Australian Academy of Sciences warned that the country’s school system had “an acute shortage of properly qualified mathematics teachers” compared to other OECD countries and had experienced a decline in student performance on internationally standardised maths tests over the last decade. Engagement had also dipped: the percentage of students taking advanced and intermediate maths subjects in year 12 had fallen from 41% in 1995 to just 29% in 2012.

In response to the report, Geoff Prince, director of the Australian Mathematical Sciences Institute, told The Australian Financial Review that the country’s performance in the subject was “internationally embarrassing”.

Cunin believes part of the problem is that high school students don’t have a clear understanding of what STEM-based careers entail, and what opportunities are available in those fields.

“A big part of our program is facilitating webinars with industry leaders and professionals in high tech fields … and exposing students to the opportunities that are out there,” she says.

But what is most exciting about the program is the space missions, made possible after Quberider partnered with DreamUp, an American space education company with an ongoing flight schedule to the ISS.

“Space is something that naturally fascinates and excites kids and adults alike,” says Cunin. “Giving students a space mission is a really effective way of catching their attention.”

Bauer confirms her students have been “very engaged” with the program since its inception, and have devoted a lot of energy “outside of school hours” to completing assigned tasks.

“There are videos, and there’s a teacher’s section and a student’s section. The kids are basically running it themselves, and I’m just the facilitator, making sure they’re meeting on time and progressing through the program quickly enough,” she says.

But the teachers deserve credit too. “This program is brand new and it’s pretty intimidating. All the teachers we’ve been working with have made a tremendous effort,” Cunin says.

Parramatta Marist High is offering the program for gifted students who have already undertaken STEM electives, says Bauer, though she suspects there will be more interest in future, once other students learn about the launch and see what their classmates have accomplished.

As for the experiments, they are being conceived and designed organically. “At the moment I’m leaving it totally up to the kids,” says Bauer. “They’re researching different options.”

Space is something that naturally fascinates and excites kids and adults alike. Giving students a space mission is a really effective way of catching their attention.

Quberider gives students suggestions to get them rolling, such as measuring the amount of radiation that astronauts are exposed to (see breakout box below), or the changes in altitude or speed when the ISS makes a sudden manoeuvre.

Cunin expects students to use their imaginations. One group is using data points to create a piece of music. “Who knows what kinds of ideas some of these gifted and talented students can come up with?” she says.

One thing is certain: excitement around the mission is mounting, and will reach a fever pitch come November.

Bauer says her students are “planning a big party to watch the launch”, which she insists will go ahead, even if it means coming into school at night. Cunin, meanwhile, will travel to Cape Canaveral to watch the SpaceX rocket lift off in person.

“I’m like the biggest kid of the program,” she admits. “I’m so excited to have a space mission – this is something we have wanted to do our entire lives. So yeah, we’re definitely going to Florida. We’re not going to miss our first baby’s launch.”

And while it may be an Australian first, Cunin is determined that it won’t be the last Quberider payload bound for the ISS.

She’s been working with the Australian government to reduce the regulatory hurdles that have discouraged small companies from engaging in space-related activities, and says launches will become more affordable as more schools sign up. “This is the first run of many,” she says.

“I would love to see every school give their year 9 and 10 students a space mission every year. That would be amazing. That’s our dream.” 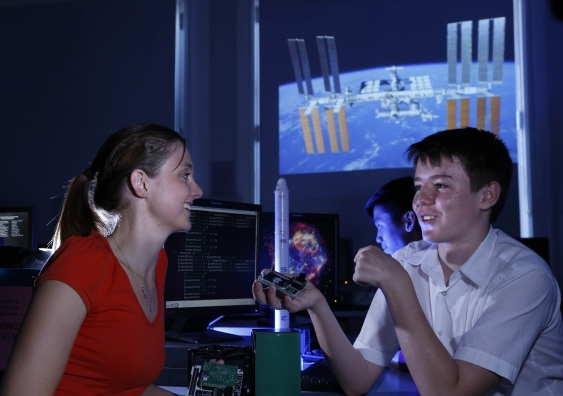 How to launch a scientific career

When the SpaceX Falcon 9 blasts off from Cape Canaveral, headed for the International Space Station, Marcus Garvey will be watching with a mixture of excitement and self-conscious dread.

nts will be onboard the rocket, thanks to space entrepreneur Solange Cunin.

“I think I will be nervous. I hope it doesn’t explode,” says Garvey, of the rocket launch. “And, of course, I hope the scientific experiments work and yield some interesting results.”

The experiment Garvey has devised with his Year 10 classmate Eden Neilson aims to measure the Earth’s electromagnetic field.

They will compare the data they collect against long- and short-term meteorological data to see if there is any correlation between fluctuations in solar radiation, weather events and climate change. “The data might even be of interest to the wider scientific community,” Garvey says.

The students are using Python computer code to write the experiments. They will then load them into a mug-sized module called an Asimov which, once activated on the ISS, will relay the data back to the Earth.