While recent attention has been focused on Russia’s efforts to influence American politics, new analysis suggests Australia has also been a target – and continues to be a target – of covert foreign influence. 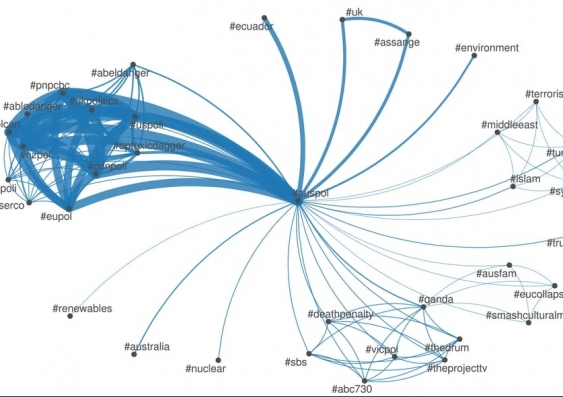 Russia was behind an enormous effort to influence politics in the US and the UK, but was Australia targeted too? In this series Hacking #auspol we explore how covert foreign influence operates in Australia, and what we can do about it.

New evidence shows that the infamous Russian “troll factory”, the Internet Research Agency (IRA), targeted Australian politics on social media between 2015 and 2017 – and that other Russian outlets may continue to conduct influence operations.

Russian intervention in the 2016 US election has generated considerable attention around the world. But while that attack was unprecedented in scope, Russia is not the only perpetrator of foreign influence, and the United States is not the only target.

The recent passage of legislation by the Australian Parliament targeting foreign lobbyists and strengthening regulations around espionage are a response to growing concerns about foreign influence operations in Australia.

In its effort to aid US lawmakers investigating Russian influence on US politics, Twitter identified 3,841 accounts suspected of operating out of the Internet Research Agency in St Petersburg. Researchers from Clemson University in the US released 3 million tweets from those accounts last month.

Our analysis of this data set shows how these accounts targeted Australian politics – particularly in reaction to the Australian response to the downing of flight MH17. Some 5,000 tweets mention the terms “#auspol”, “Australia” or “MH17” – with “Australia” the most common of the three.

Examples of their interventions in #auspol include:

These are not retweets, but original tweets from IRA troll accounts, and both have an objective of undermining support for the government. 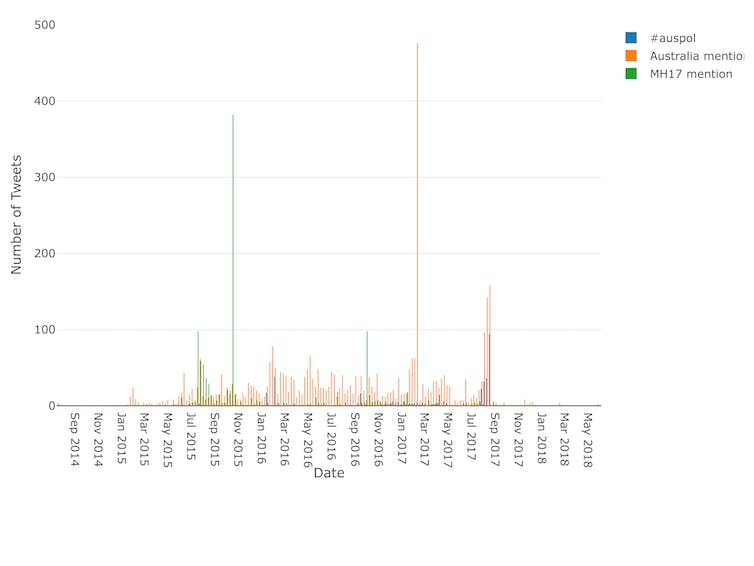 The jump in activity focusing on MH17 correlates with the Australian government’s response to the Russian missile attack on MH17, when Australia deployed fighter aircraft to operate in Syrian airspace where Russian aircraft were also operational. During this period, the Australian Defence Force (ADF) was also confronted by Russian military cyber operations.

While this may seem like innocent fun, it is also a technique of spy craft. “Assets”, in this case, Australian citizens, are recruited on neutral, non-political terms before they are shifted towards political topics.

#auspol targeted during budget and by-elections

Studies of Russian Twitter trolls show that they are distinct from other actors in that they tend to link to and promote official Russian propaganda outlets.

To better understand the role played by these accounts in Australian politics, we collected tweets using the hashtag #auspol from 4 May to 30 July 2018. That period runs from the lead-up to the 2018 budget through the by-elections held the end of July. The #auspol hashtag has been used on Twitter to aggregate discussions about Australian politics since June 2010.

The purpose of this research is not to identify specific troll accounts, but to identify how Russian propaganda materials are becoming involved in social media discussions about Australian politics.

For this analysis we focus on Sputnik and RT (formerly Russia Today). We call these outlets propaganda for two reasons. Firstly, they are recognised as such by the United States Department of Justice which has recently required them to register under the Foreign Agent Registration Act. Second, these outlets describe themselves in terms of their propaganda function with RT explaining that their purpose is to:

[acquaint] an international audience with the Russian viewpoint. 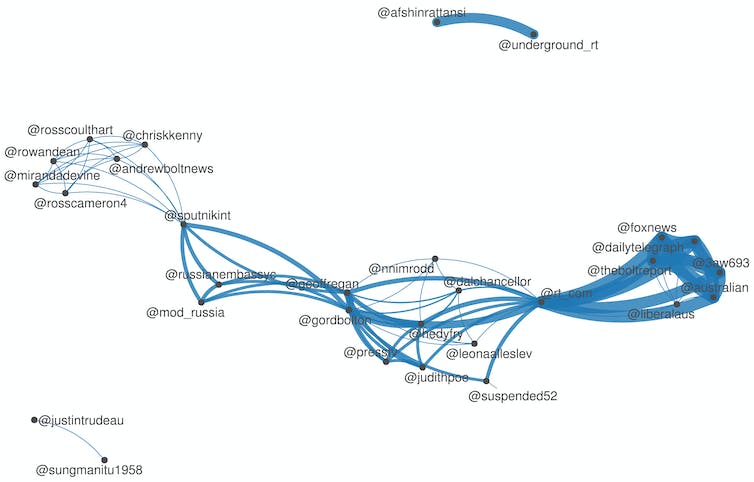 Network map of accounts within #auspol tweets mentioning or linking to Russian propaganda outlets, Sputnik and RT. Data collected via Twitter’s streaming API, filtered for #auspol from 4 May until 30 July, 2018. Author provided

The above network map of #auspol tweets which mention Russian propaganda outlets, or link to their reporting, indicates that these accounts appear most commonly in discussions with News Corporation media platforms. There is also a wider international focus including Russian diplomatic delegations.

These results contrast with the normal #auspol mention network, which contains a much broader range of domestic political actors and media organisations. 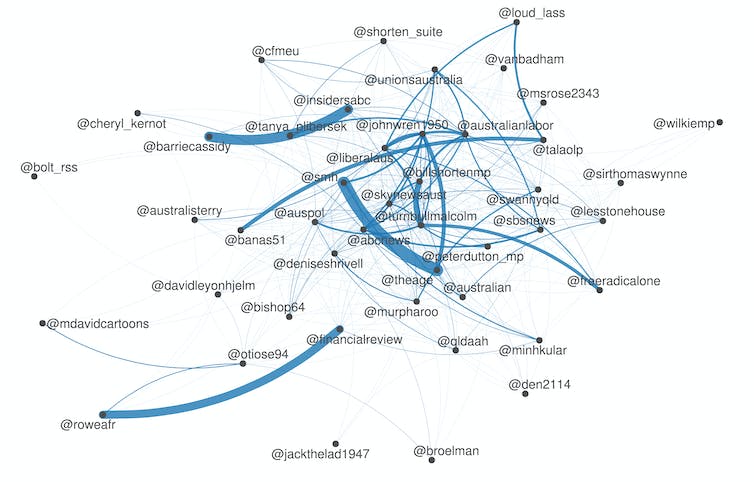 The data suggest that Russian influence operations may be targeting the political right in Australia at this time. There is also an emphasis on international topics, such as terrorism, and UK, EU, and US politics.

The hashtag #abledanger (and the typo #abeldanger) also figures prominently. It refers to a blog that promotes conspiracy theories about American politics.

The hashtag network map of #auspol without Russian propaganda references looks considerably different. It reflects domestic political concerns such as the budget or debate over My Health Record, refugee policy and districts that were holding by-elections. 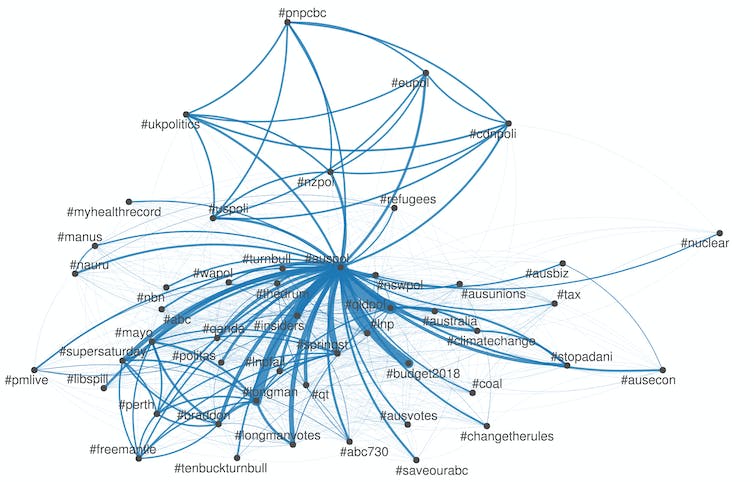 There are two ways to think about how information is exchanged in the public sphere. One is a rational model, where claims are backed by evidence. The other is a narrative model, where people reason through stories that resonate with them. Many contemporary theories of democracy rely on the rational model, but foreign influence operations make use of the fact that people behave more in line with the narrative model.

Disinformation, in this context, is not so much the distribution of falsehoods for political effect, but rather communications designed to manipulate a target audience in a manner favourable to the perpetrator.

In early 2015, Twitter accounts affiliated with the Internet Research Agency focused almost as much on nonpolitical topics as they did on political topics. These accounts are human-controlled accounts, so-called “trolls”, and they operate differently from bots.

Bots are automated to promote specific topics, hashtags, so they often lack the nuanced communication abilities of human-controlled accounts. This makes them less effective in strategically moving an audience than troll accounts run by humans.

By contrast, troll accounts are able to develop relationships, and it’s often through these relationships that political opinions are developed and voting decisions made.

Adversarial actors, such as Russia, try to shift the identifications of a target audience from one political affiliation to another. One way of doing this is to break identifications with governing organisations by promoting a sense of insecurity and danger.

For example, there was a tragic case earlier this year where a man killed himself along with several members of his family. The ABC reported the news with the headline: “Margaret River Murder-Suicide: Seven People Found Dead at Home Near WA Holiday Town”. Meanwhile, the Russian news outlet Russia Today (RT) reported the news with the headline: “Seven People, Including 4 Children Shot Dead in Southwestern Australia”.

Whereas the ABC headline alerts readers that there is no ongoing threat, the RT headline leaves it open, despite having the same information as the ABC buried down in the text of the article.

The difference seems minor, but there is increasing evidence that repeated messaging like this can have the effect of eroding support for political authorities and institutions. It helps build a narrative that these institutions are incapable of addressing the needs of their citizens.

These data should not be overstated. Of the 632,398 #auspol tweets collected from early May until 30 July, only 119 mentioned or linked to Russian propaganda outlets.

Nonetheless, the Russian tweets shed light on Russia’s propaganda efforts in Australia. The data set indicates that they are trying to cultivate an audience here through memes, hashtag games, and Aussie cultural references. And the network maps suggest they are trying to move Australians’ views on foreign affairs, particularly by targeting reporting on News Corporation outlets.

Democracies are, by their nature, open political systems. That makes them particularly vulnerable to influence efforts by foreign adversaries. The attacks on the 2016 US election have provided adversaries with a playbook to engage in operations against countries like Australia.

Russia's COVID-19 vaccine hasn't been fully tested. Doling it out risks side effects and false protection

Fingerprint login should be a secure defence for our data, but most of us don't use it properly