A surprising study on the behaviour of unrelated lizards demonstrates how evolution can lead to different species learning the same skills. 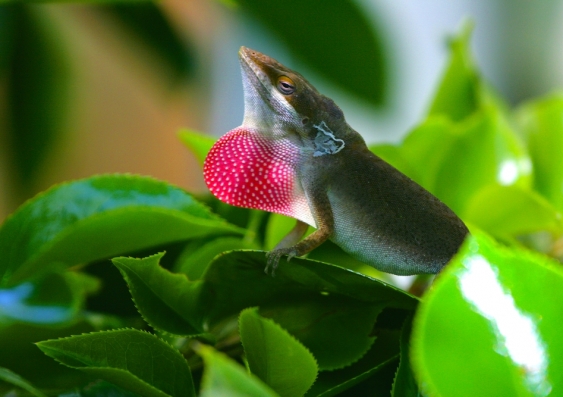 Anolis (pictured) lizards retract their dewlaps (throat fans) for the same reason as Draco lizards, which are unrelated to the species and live thousands of kilometres away. Photo: Shutterstock.

It’s dark on the island of Jamaica and a male Anolis lizard is trying to capture the attention of a female lizard in a rainforest.

But the wind is blowing the vegetation around him, hampering his efforts to woo a mate, so he starts to perform an elaborate head bob.

When that fails to achieve the required result, he does push-ups and extends and retracts his dewlap (throat fan).

Almost 20,000 kilometres away, a male Draco lizard in the Ulu Gombak mountains outside Kuala Lumpur has a similar problem – it’s getting dark and the windblown vegetation is blurring his sight but he needs to show his male Draco enemies that they are on his territory.

So the Draco lizard starts an elaborate head bob, followed by push-ups and extensions and retractions of his dewlap.

These lizards aren’t related, but they occupy the same range of rainforest and grassland habitats, and therefore face the same problems when it comes to communicating to a potential mate or enemy in visually ‘noisy’ environments.

Remarkably, they have evolved the same strategy to cope with the same selection problems, Dr Terry Ord from the Evolution & Ecology Research Centre at the UNSW School of Biological, Earth and Environmental Sciences says.

According to his research published in Ecology Letters, this scenario of two unrelated lizards displaying similar behaviour shows that natural selection directs evolution towards the same common set of adaptive outcomes over and over again.

“The surprise is that lizards in both groups have evolved remarkably similar displays for communication, but they also tailor the production of those displays according to the prevailing conditions experienced at the time of display,” Dr Ord says.

“That is, increasing the speed or the length of time they spend displaying the movements as the viewing conditions deteriorate.

“Really there should be essentially innumerable ways these lizards could have adapted their displays to remain effective, and there is strong evolutionary predictions that would lead us to expect this as well.”

Dr Ord says what this study shows is that natural selection driving similarities between different species.

Formally, this is known as convergent evolution — the independent origin of similar adaptations, he says.

“It seemed that these types of convergent, common adaptations are outcomes that would only really occur among species that are closely-related in some capacity,” he says.

“The reason for this is a bit complicated and it rests on the fact that adaptations build on characteristics that a species already possesses.”

“So, the longer species have evolved independently of each other, the less likely they would evolve the same adaptive solutions if they were exposed to the same change in the environment.”

But what this study highlights, he says, is what many evolutionary ecologists have argued - that natural selection is an extremely powerful process that can override the "baggage" of past history to produce the same adaptations.

“So if arm-waving is the most effective solution to some change in the environment, then natural selection would ultimately lead to its evolution rather than a more subtle (less effective) modification to an existing vocal call,” he says.

“Evolutionary biologists are excited about convergent evolution because it gives us multiple examples of the same adaptation evolving time and time again in very different animals.

“So it tells us what the challenges are faced by these animals and how they have solved it in terms of evolutionary adaptation.”

The study documents this independent evolution of common communication strategies amongst groups that have evolved separately from each other for hundreds of millions of years.

Dr Ord says the striking similarities in communication strategies for maintaining an effective communication system in noisy conditions has evolved in various forms in many insects, fish, frogs, birds and mammals.

“For example, increasing the volume of calls when there's lots of acoustic background noise, or extending the length of those calls or even vibrational signals by spiders and such,” Dr Ord says.

“The fact that many other groups of animals have also evolved these same adaptive strategies is even more extraordinary.”

Read the study in Ecology Letters.