Inspired by UNSW’s ground-breaking research, Steven Durbach's paintings, animations, and other artworks express the beauty of the ideas at the heart of quantum physics. 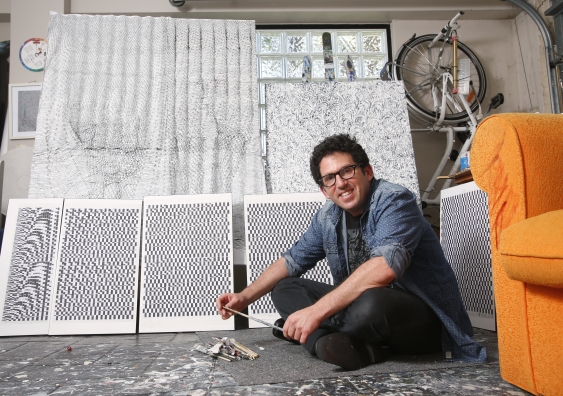 Steve Durbach in his Maroubra studio with examples of his quantum-inspired art. Photo: Quentin Jones

In an unusual melding of science and art, a series of paintings, animations, machinery and other artworks inspired by UNSW’s ground-breaking research in quantum physics is on public display in Bondi.

Schrödinger’s Bird, an exhibition by scientist-turned-artist Steven Durbach, explores some of the counter intuitive concepts of the quantum world, including the dual wave-particle nature of matter at the atomic scale.

The artworks are the result of Durbach’s regular lab visits and conversations during the past year with researchers at the UNSW headquarters of the ARC Centre of Excellence for Quantum Computation and Communication Technology (CQC2T) – a globally unique facility that is leading the international race to build the world’s first quantum computer in silicon.

“My work aims to express the beauty of some of the ideas at the heart of quantum physics and quantum computing that these UNSW scientists are so passionate about,” says Durbach. 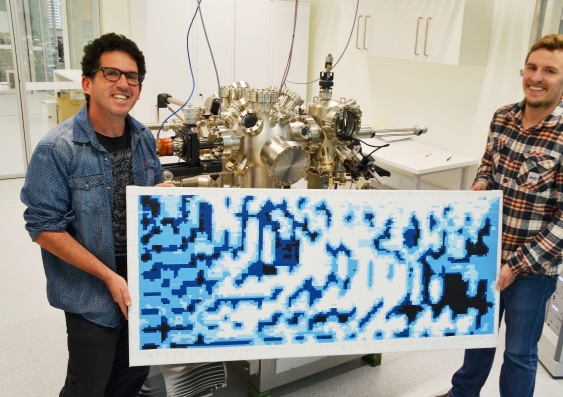 “The project is very much a collaboration with the researchers and I’ve been excited by how enthusiastic many have been about working with an artist.

“Celebrating science through art is potentially a powerful way to engage the public with science and I hope the exhibition will inspire curiosity in quantum physics and science in general,” he says.

Scientia Professor Sven Rogge, Head of the UNSW School of Physics and a program manager at CQC2T, will open the exhibition at the Bondi Pavilion Gallery tonight.

One of the artworks, called Crystal Growth, was created by UNSW scientists at the Centre, who added to the drawing individually, interpreting a simple design rule laid down by Durbach, which was inspired by the concept of a growing silicon crystal.

As part of the science and art collaboration, UNSW quantum researchers including Professor Rogge will also give two public talks in the gallery as part of the exhibition.

Professor Rogge says that creating a piece of art at work was a fun, social endeavour for the scientists. “It has been great to see an artwork growing in the office. Everyone tried to work out who added the different, new parts,” he says.

Professor Rogge most enjoyed his discussions with Durbach about the concept of measurement, which led to an animation called Schrödinger’s Bird. It reflects the fact that, in the quantum world, it is not possible to measure a system and extract information about it without changing the system.

“This is counter intuitive. But it is something that we just accept as quantum physicists. We have to deal with it every day in our research,” says Professor Rogge. “So it is good to see how an artist interprets this and gets to the core of the quantum-ness that we want to utilise to build a quantum computer.” 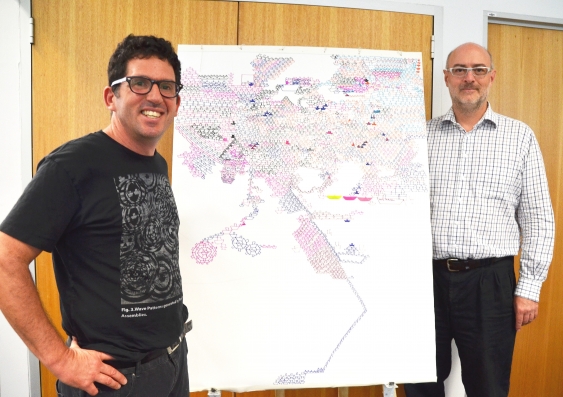 Steve Durbach and CQC2T Scientia Professor Sven Rogge with one of the artworks.

Dr Matthew Broome, a UNSW postdoctoral fellow whose quantum computing research focuses on placing individual phosphorus atoms precisely into a silicon chip using a scanning tunnelling microscope, has also been closely involved with the art project and will give one of the talks.

Dr Broome has done a lot of scientific outreach in the Australian outback in the past, engaging school students with physics.  “I’ve never incorporated art into my outreach before. But working with Steve has been an eye opener. Art can inspire people to think about things differently,” he says.

Durbach, who also goes under the name Sid Sledge, was a molecular biologist in South Africa before deciding to concentrate on his art full-time after moving to Sydney in 2008. He was introduced to the research at CQC2T in 2015.

Schrödinger’s cat – the concept of a cat in a box that is simultaneously dead and alive until it is observed and becomes one or the other – has been used since the 1930s to explain the principle of quantum superposition. Durbach often uses a bird motif in his art, and the title Schrödinger’s Bird represents a bird flying in several different worlds simultaneously. The world of Art? The world of Science?  "At its best, it is impossible to tell," he says.

What: Schrödinger’s Bird, an exhibition of art by Steven Durbach inspired by quantum research at UNSW

What: Physics Night with UNSW’s Dr Matthew Broome, Sam Gorman and Anubhav Dixit, who will discuss some of the strange aspects of the quantum world as well as perform physics demonstrations, while Durbach paints to capture the energy of the encounter.

What: The Science of Art and the Art of Science with UNSW quantum physicist Professor Sven Rogge and full-time artist and former medical researcher Dr Beric Henderson.

Australia could become a leader in cybersecurity research