More than 300 high school students attending a Women in Science symposium have been encouraged by the NSW Minister for Women, Pru Goward, to pursue careers in STEM to shape a better world. 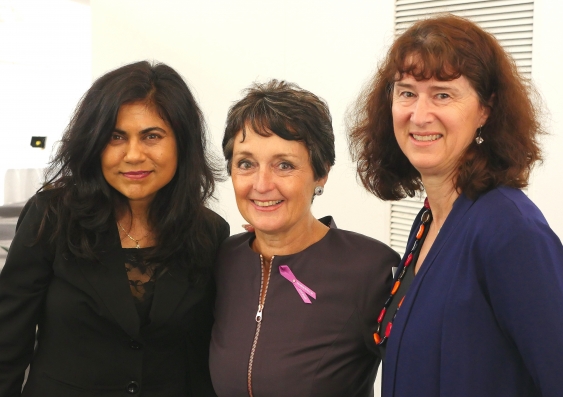 More than 300 high school students attending a Women in Science symposium co-hosted by UNSW have been encouraged by the NSW Minister for Women, Pru Goward, to pursue careers in STEM so they can shape a better world.

Winners of the UNSW Science 50:50 New Innovators Competition also received awards for their novel ideas, which included a solar-powered emergency apparatus and a form of electronic paper.

Ms Goward told the gathered students that many women around the world had interesting careers designing better solar panels, discovering new species and new disease treatments, and making advancing in fields such as nanotechnology and personalised medicine.

Science could be hard, and required precise thinking. “But the opportunities that flow from science greatly outweigh the challenges,” she said.

Unleash you imagination. Pursue your passion. You have a whole range of different pathways into the future.

There was an economic imperative to have more female scientists. “Young women remain a significant untapped labour resource in STEM fields. You are where we can make the big productivity gains,” the Minister told the students.

But there was also a social imperative. “Science will continue to change the world. So we need to ensure that science, with all its power, with all its opportunities, is positive for the world and positive for women. And that means young women have to be part of it,” Ms Goward said.

IT expert and Chief Operating Officer for SAS Australia and New Zealand Lynnett Clunies-Ross had a similar message in her address, asking the girls: “Who do you want controlling the robots in the future?” She added: "We want women."

The event was chaired by UNSW Scientia Professor Veena Sahajwalla, who leads the Science 50:50 initiative – a program to encourage girls into science, which is supported by her Australian Research Council (ARC) Georgina Sweet Laureate Fellowship.

Professor Sahajwalla, who has just been announced as a member of the expert advisory board of Women in Science AUSTRALIA,  said the day-long event at the museum provided girls with an important opportunity to discuss the jobs of the future at a career fair, see the museum’s laboratories, and talk to scientists to find out why they love their work.

“Unleash you imagination. Pursue your passion. You have a whole range of different pathways into the future,” she told the high school students.

In her keynote address, ARC Executive Director for Biological Sciences and Biotechnology Dr Fiona Cameron said she was impressed to see such a high attendance of industry representatives at the event, because it was vital to the country’s future that science graduates take up careers in industry.

The biggest secret around is that science is awesome fun. Follow a path that you’re going to enjoy, because that way it will be a long and very rewarding career.

She also told the students that it was an amazing feeling to carry out research that no one had ever done before.

“The biggest secret around is that science is awesome fun. Follow a path that you’re going to enjoy, because that way it will be a long and very rewarding career,” she said.

Five young women who were in Year 12 last year won prizes of $4000 each in the UNSW Science 50:50 New Innovators Competition, and four received their awards at the symposium.

Stephanie Chan, who attended Sydney Girls’ High School and is studying civil engineering at UNSW, said her interest in fitness and the problem of growing levels of obesity inspired her idea for a 3D virtual reality fitness program.

Christy In Hee Baek, who attended St Patrick’s Marist College Dundas and is studying electrical engineering at UNSW, won for her idea for a high-tech filter mask and skin lotion to overcome the problems of dust pollution in Asian cities.

She said she came up with the concept while sitting at the hairdressers, watching the staff wear masks and apply lotions on their clients’ skin.

With science the future is in your hands

Veena Sahajwalla is named 2022 NSW Australian of the Year