With science the future is in your hands 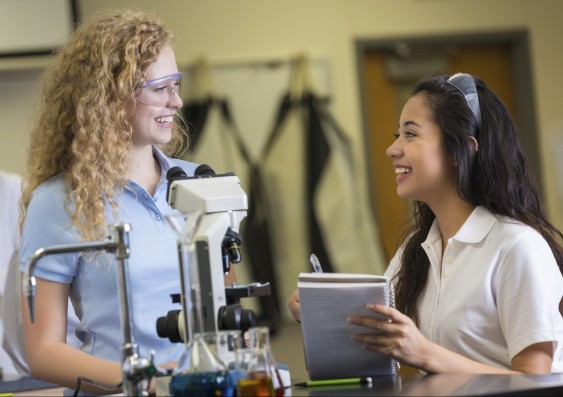 More than 200 female high school students heard inspiring stories from leading female scientists and industry representatives and had the opportunity to question them about their careers at a Women in Science Symposium co-hosted by UNSW Science and the Australian National Maritime Museum.

Professor Sahajwalla told the girls that a science degree was a very good basis for a variety of careers in business and industry, as well as research, and reminded them that some jobs have not even been invented yet.

“There is an incredible array of opportunities. And you never know what else the future holds,” she said.

The Science 50:50 will provide scholarships, mentoring, and industry immersion and networking opportunities to help encourage girls to pursue careers in science and technology.  It is supported by Professor Sahajwalla’s Australian Research Council Georgina Sweet Laureate Fellowship.

Professor Jacobs said it was a great privilege to launch Science 50:50 and thanked the ARC and industry partners.

He highlighted the wide variety of interesting jobs available in science, from understanding the origin of the universe and launching satellites into space, to predicting disasters and finding solutions to water, food and energy shortages.

Science was not only fascinating. “You can also do things that change the world. I hope you will go away inspired to follow a career in science. We need talented young women like yourselves in science,” he told the girls.

UNSW marine ecologist, Professor Emma Johnston, recounted some of her adventures in remote locations. “I never thought I’d be brave enough to dive under the ice in Antarctica. But I did,” she said, displaying a photo of herself in the freezing water.

Her team’s research has shown that even a slight change in the timing of the annual loss of sea-ice could have dire consequences for ecosystems by allowing more sunlight to reach the sea floor.

Professor Johnston encouraged the girls to hold tight to their passion for science and to their right to have a rewarding career, even if they met challenges along the way.

Roger Leigh, of Cochlear, said that the company now always refers to male and female engineers, and includes equal numbers of photographs of men and women in its career literature, to help overcome an “unconscious bias”, held by many people, that engineers are always male.