A team led by UNSW scientists have significantly increased the coherence time of a spin-orbit qubit in silicon, allowing them to preserve quantum information for longer. These results open up a new pathway to scale silicon quantum computers. 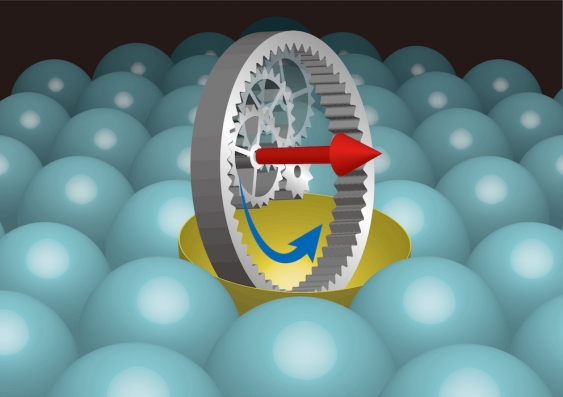 Spin-orbit coupling of an electron in a lattice structure. The circular orbit of the charged electron and the spin are locked together like gears due to the very strong attraction in the spin-orbit coupling. Image: Takashi Kobayashi

A group of international scientists have substantially lengthened the duration of time that a spin-orbit qubit in silicon can retain quantum information for, opening up a new pathway to make silicon quantum computers more scalable and functional.

Spin-orbit qubits have been investigated for over a decade as an option to scale up the number of qubits in a quantum computer, as they are easy to manipulate and couple over long distances. However, they have always shown very limited coherence times, far too short for quantum technologies.

The research published today in Nature Materials shows that long coherence times are possible when spin-orbit coupling is strong enough. In fact, the scientists demonstrated coherence times 10,000 times longer than previously recorded for spin-orbit qubits, making them an ideal candidate for scaling up silicon quantum computers.

How stable a qubit is determines the length of time that it can preserve quantum information for.

In spin-orbit qubits information is stored on the spin of the electron as well as its motion – how it ‘orbits’ atoms in the lattice of the chip. It is the strength of the coupling between these two spins that keeps the qubit stable and less prone to being destroyed by electric noise in devices.

“The information is stored in the orientation of the spin and orbit of the electron, not just the spin. The circular orbit of the charged electron and the spin are locked together like gears due to the very strong attraction in the spin-orbit coupling.

To increase the coherence time, the researchers first created spin-orbit qubits by introducing impurities, called acceptor dopant atoms, in a silicon crystal. The team then modified the strain in the silicon lattice structure of the chip to generate different levels of spin-orbit coupling.

“The crystal is special because it only contains the isotope of silicon with no nuclear spin. This eliminates magnetic noise, and because it is strained sensitivity to electric noise is also reduced,” says Kobayashi.

“Our chip was fixed on to a material that at a low temperature stretches out the silicon – like a rubber band. Stretching the lattice to the correct tension allowed us to tune the spin-orbit coupling to the optimal value.”

This means quantum information is preserved for much longer, allowing many more operations to be performed – an important stepping-stone for scaling up quantum computers.

Scaling up with spin-orbit coupling

For a quantum computer to outperform a classical computer, a large number of qubits need to work together to perform complex calculations.

“The stability of our spin-orbit qubit to electric fields is unique, proving a robust new pathway to make scalable quantum computers,” says co-author Joe Salfi, who performed the research at CQC2T and is now at the University of British Columbia.

The finding ultimately enables new ways of manipulating individual qubits and coupling qubits over much larger distances, which will make the chip fabrication process more flexible.

Earlier research published in Science Advances by the UNSW team showed spin-orbit coupling in silicon provides many advantages for scaling up to a large number of qubits.