A serendipitous discovery in the lab has the potential to revolutionise embryo models and targeted drug therapies. 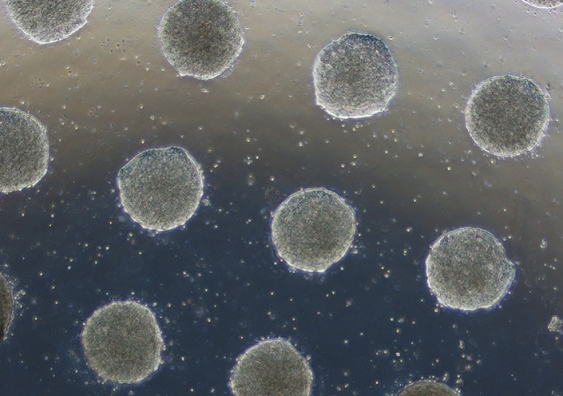 Materials scientists at UNSW Sydney have shown that human pluripotent stem cells in a lab can initiate a process resembling the gastrulation phase – where cells begin differentiating into new cell types – much earlier than occurs in mother nature.

For an embryo developing in the womb, gastrulation occurs at day 14. But in a lab at UNSW’s Kensington campus, Scientia Associate Professor Kris Kilian oversaw an experiment where a gastrulation-like event was triggered within two days of culturing human stem cells in a unique biomaterial that, as it turned out, set the conditions to mimic this stage of embryo development.

“Gastrulation is the key step that leads to the human body plan,” says A/Prof. Kilian.

“It is the start of the process where a simple sheet of cells transforms to make up all the tissues of the body – nerves, cardiovascular and blood tissue and structural tissue like muscle and bone. But we haven’t really been able to study the process in humans because you can’t study this in the lab without taking developing embryonic tissue.

“So it’s really exciting that we were able to see this happening in vitro.”

The achievement, which was reported today in the journal Advanced Science, has not only implications for our understanding of human embryonic development, but also new treatments in medicine including cell therapy, targeted drug development and CRISPR gene-editing technologies.

The most important time in your life

Developmental biologist Lewis Wolpert once said: “It is not birth, marriage or death, but gastrulation which is truly the most important time in your life.” Gastrulation is the key event in an embryo’s development when a mass of undifferentiated cells begin the first steps of a long journey in the womb towards formation of a human being. This is one of the reasons that work on embryos left over from IVF is forbidden beyond 14 days, when gastrulation occurs.

A/Prof Kilian says that up until now, it has been difficult to study this process in humans because of obvious ethical constraints.

“We currently can’t do this because embryo research beyond 14 days is often viewed as unethical, and it’s currently impossible in vivo because you’d need to observe an embryo in a pregnant human mother.”

Read more: What lobsters can teach us about immortality

But while there are animal models to study – such as mice and zebrafish – and other researchers have induced gastrulation-like events in the lab using chemicals including growth factors, this is the first time culture conditions alone have initiated gastrulation outside of a human body.

“Our method could lead to a new approach to mimic human embryogenesis outside of a person,” A/Prof Kilian says.

In the medical sciences, the ability to induce gastrulation in ‘synthetic’ embryos like those created by the UNSW team could also help in creating body tissue or even miniature organs based on a patient’s own genetic code. These so-called ‘organoids’, which are barely visible to the naked eye, are already being developed using stem cells for medical research, such as testing the effectiveness of certain drugs. But the process requires chemicals to stimulate the cells into forming differentiated organ tissue which is time consuming and expensive.

A/Prof. Kilian says controlling gastrulation by using only hydrogel materials to stimulate what happens naturally could be a quicker and more cost-effective solution.

“The thing that really excites us about this is the potential to make therapeutically useful cells much faster and more reproducible,” says A/Prof. Kilian.

“Our method could provide a way to initiate ‘organogenesis’ – with an array of hundreds of well-defined cell aggregates in a single well – leading to faster and more well-defined structures that could then be turned into brain, liver, gut, potentially any solid organ tissue.

“This approach could also revolutionise drug development including RNA and CRISPR/Cas9 approaches by providing a more reproducible way to mimic human tissue in a lab. For instance, you could make an organoid from a patient’s cells, then test therapies aimed at correcting mutations or restoring function.”

A hydrogel home is just right

The secret to the success of the UNSW team’s work in the lab is in the structure of the culture that the stem cells were seeded into. Using a technique adapted from the semiconductor industry, defined regions are fabricated across a hydrogel for cells to stick to. This combination of geometric confinement and the soft gel that mimics the surface of a human uterus coaxes the cells to start gastrulation-like processes.

“We discovered that if you take pluripotent stem cells and you put them in a very confined and soft environment, it’s akin to what the cells might experience in a mother's uterus,” says A/Prof. Kilian.

“That viscoelastic, soft, squishy material gives them just enough cues that they initiate this gastrulation-like process all on their own.”

Read more: The blood stem cell research that could change medicine of the future

This contrasts greatly with the standard practice that’s been used in labs more recently that forces a type of gastrulation process using growth factors and chemical supplements on hard plastic or glass dishes.

“Unsurprisingly, previous research culturing stem cells on glass or plastic have failed to recapitulate the signals that happen in a body. But using our soft substrates mimicking embryonic tissue, we can coax the cells to spatially organise and begin the early morphogenesis that could ultimately create a person.”

But, A/Prof. Kilian cautions, while the team has discovered the conditions that emulate the first stage of gastrulation, it doesn’t appear to go any further.

“This method only demonstrates the early, but very crucial stage in development. The impact lies in being able to study this all-important stage of human development, and to use the generated structures for developing therapies.”

Serendipity can be a big part of discovery

As with most great discoveries in science, serendipity played a role. The team weren’t actively looking to bring on gastrulation when they dropped some stem cells onto the hydrogel substrate.

Lead author Dr Pallavi Srivastava was surprised by what she observed.

“Initially I was trying to get stem cells to attach to our hydrogels and planned to differentiate them in the conventional way,” she says.

“The difference between cells cultured on glass and those on our gels was very striking. I remember thinking, ‘wow, something is going on here. I need to investigate’. This led to a big shift in my project, and ultimately this exciting discovery.”

The researchers are hopeful they can continue exploring the benefits of their discovery by understanding how materials can guide embryogenesis and beyond. A/Prof. Kilian says that while this finding is exciting, more work is needed to guide the gastrulation-like processes to form useful tissues.

“This is really the first step in what we hope is a platform technology for producing useful tissue models. Triggering gastrulation is not enough – now we need to provide other signals to keep differentiation going.”

Discovering the next set of materials signals may allow creation of virtually any solid tissue for research purposes, A/Prof. Kilian says, and for generating useful cell types for regenerative medicine.

“Considering pluripotent stem cells can now be generated from blood or tissue samples, the future is wide open for regenerating tissues and organs from a patient’s own cells.”