A common fabric dye pumped into coal seams could hold the key to increased gas yields and reduced emissions, marking a major step forward in the transition to a cleaner energy future. 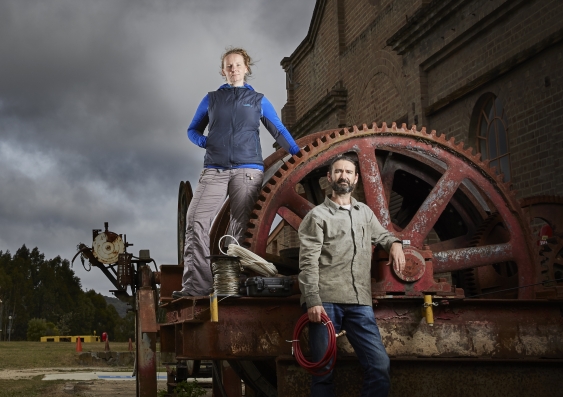 Mike Manefield and Sabrina Beckmann at the Lithgow mine site. photo Nick Cubbin

UNSW researcher Dr Sabrina Beckmann was doing a routine check of samples in the lab, when she realised she was looking at something extraordinary.

Peering through a microscope at the School of Biotechnology and Biomolecular Sciences (BABS), Beckmann saw a previously unknown red crystal lattice forming on the slides. Exactly how, or even if, the needle-like crystals would impact on her research into gas extraction was far from apparent. But the Research Fellow knew she needed to make an urgent call to the leader of her research team, Associate Professor Mike Manefield.

Three years later, those odd, strangely beautiful red crystals have proved to be the key to dramatically increasing gas yields from coal seam gas deposits and from biogas plants, via a relatively simple and cheap new process. Its application in coal seam gas wells has demonstrated up to 10-fold increases in gas yields. For biogas generation, using various food, agricultural and other organic waste streams, the gains are even higher, up to 18-fold greater.

The difference between burning coal for electricity and burning gas is like guzzling a big cask of cheap red wine or slowly savouring a glass of fine red. There is no comparison.

“It was an accident,” says microbiologist Manefield, of the initial discovery of the crystal lattice. Its breakthrough application, however, is the result of an elaborate cross-disciplinary UNSW study into the nature and interactions of methane-producing microbes, or “methanogenic archaea”. These single-cell organisms survive in some of the most extreme environments on earth, including deep under the earth within coal seams and on decaying organic matter, producing some one billion tonnes of methane a year.

After successful trials west of Sydney in the coal fields near Lithgow, the process has been patented. Full-scale industrial testing and validation, ahead of potential commercialisation, will begin this year in India, in partnership with India’s dominant oil and gas explorer and producer, the state-owned Oil and Natural Gas company, and the Energy and Resources Institute (TERI). In its recent funding round, the Australia-India Strategic Research Fund (AISRF) announced a new grant of almost $1 million to support the project.

“This is very exciting and likely to be a game changer,” says Manefield. “There is a lot riding on natural gas, or methane, to help bring global emissions down as the world transitions to cleaner fuels. 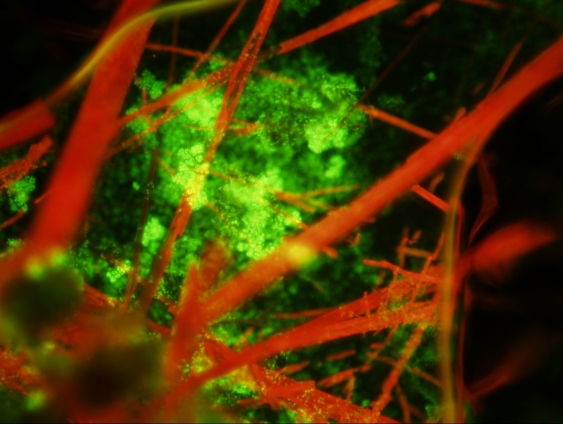 As gases burn far more efficiently than solids, you emit half as much carbon dioxide for the same amount of electricity when you burn gas, compared with coal.”

The team’s research approach was initially fairly standard. Solutions of “neutral red”, a common synthetic dye routinely used for fabrics or to stain samples for viewing under the microscope, were applied to samples made up of coal and microbe-rich groundwater from coal seams. At low concentrations, the neutral red solution precipitated no notable changes. But at high concentrations of the dye solution, the red crystal lattice structures began to form. Most significantly, the needle-like crystals appeared to “mop up” electrons.

“The crystals act as electron sponges, harvesting electrons from minerals and bacteria in the mixture and then transferring them with a lot of power to the methane-producing microbes, boosting their growth,” says Manefield.

“It’s simple. If the microbes grow faster, they fart more methane.” That finding was extraordinary enough. But field tests were essential if the process was to have industrial applications. At their Lithgow site, the researchers injected small quantities of neutral red 80 metres underground into a water-saturated coal seam, at three different locations. A five- to 10-fold increase in methane production was recorded over a 12-month period.

We could greatly reduce the number of coal seam gas wells needed to deliver the same amount of gas – and also add value to coal deposits that would otherwise be uneconomical to exploit.

The Indian trials take the research a step further, enabling a battery of industrial-scale tests that factor in critical variables such as coal seam pressure and temperature, as well as the development of new technologies to precisely introduce the dye.

The partnership with India is a natural fit, bringing together the two countries’ considerable and complementary expertise in the science of coal and gas deposits.

In India, the national electricity grid is under intense pressure and some parts of the country have no access to power. Accelerated methane production is a potential means of extracting much more energy from each coal seam gas well, but it also may open up new sources of gas. Much of India’s untapped coal deposits consist of younger, softer coal that is much easier for methane-producing microbes to digest – and, therefore, potentially a much larger source of methane than higher-value hard, black coal. UNSW’s synthetic dye process could make these currently unviable soft coal deposits more commercially attractive for coal seam gas development.

“We could greatly reduce the number of coal seam gas wells needed to deliver the same amount of gas – and also add value to coal deposits that would otherwise be uneconomical to exploit,” Manefield explains.

The India-based project is also expected to deliver new fundamental knowledge about how the methane-producing microbes, known as “archaea”, work he says. It was only half a century ago that scientists realised archaea are so distinct they cannot be lumped in with bacteria or other simple organisms, but are a separate life form. 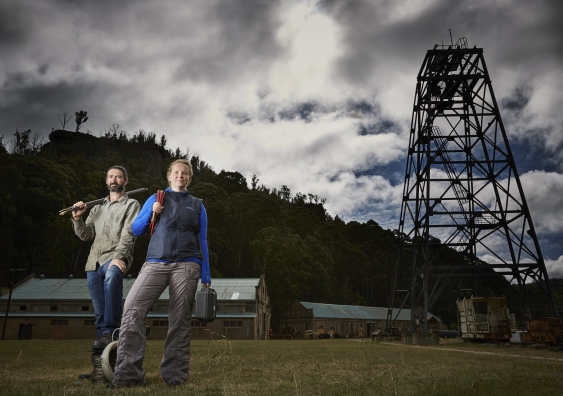 “We still don’t really understand how they tick. This is a chance to learn more and inform our wider understanding of methane gas production,” Manefield says.

While potentially lucrative, Manefield considers coal seam gas a “transition” energy source as the world moves towards renewable energy. Methane is both naturally occurring and generated through human activities such as farming livestock, and when released directly into the atmosphere it is a potent greenhouse gas. But if captured and burnt for energy, with a by-product of only carbon dioxide, its direct environmental impact is greatly reduced. Total emissions, too, can be reduced if gas-fired electricity generation replaces coal-fired power.

“This is a big step forward at this transition stage,” says Manefield. “The difference between burning coal for electricity and burning gas is like guzzling a big cask of cheap red wine or slowly savouring a glass of fine red. There is no comparison.”

When the results of the UNSW study first appeared in the prestigious Royal Society of Chemistry journal Energy and Environmental Science, Associate Professor Mike Manefield and his team – including UNSW’s Chris Marjo, Xiaomin Li, Jan Seidel, Yee Mon Oo and Cornelia Welte – were inundated with inquiries from around the world, many from biogas generating firms. While funding had been secured to apply the new processes within coal seam wells, biogas was outside the remit of that major research grant.

Unlike coal seam applications, biogas generation is an ongoing process. However, it is currently too expensive to continuously add neutral red to biogas reactors. To more efficiently extract energy from food and agricultural waste, additional research is required to immobilise or recover the neutral red crystals after application.

Given the importance of biogas to the future energy mix, there must be a way of developing the technology for this application. But that would require investment. The answer is a crowd-funding model in which companies wanting to see the results of further research could opt in through financial contributions. It’s not a first of its kind, but is, says Manefield, an innovative way to maintain research momentum at a time of ever-increasing competition for government research funds.