The hyper-sexual world of music videos fascinates so many viewers because it promises that sex is all-around, fast and largely free of charge, writes Rob Brooks. 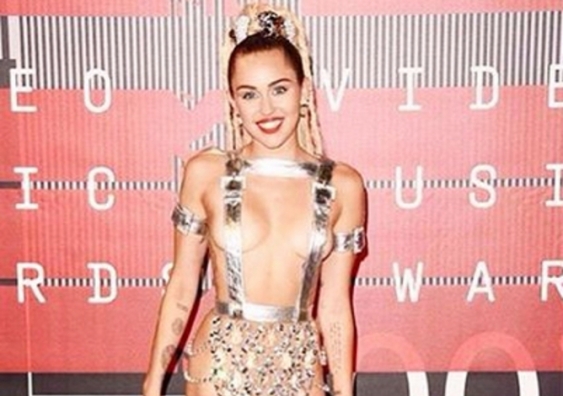 OPINION: That most confected of artificial television spectacles, the MTV Video Music Awards has mercifully passed for another year. Miley Cyrus returned as host to the scene of her infamous 2013 performance where she twerked into social media infamy. And some singers said some stuff, wore some clothes and dissed or kissed one another.

Sentient members of the public might scratch their heads and wonder who actually takes an interest in mediocre award-night exhibitionism? How do the trivial utterances and actions of Miley Cyrus, Taylor Swift and the West-Kardashians become any concern of ours?

A deeply human compulsion for gossip powers the entertainment “news” machine. Gossip is the GPS by which we navigate our social worlds and their endless reticulating roadways of affiliation and obligation. Knowing who, in our own social mileu, is sleeping with whom and which couples are approaching splitsville, can help us avoid embarrassment, or capitalise on fast-breaking social opportunities.

Storytellers have long known that audiences thirst for narrative clues to how others navigate love, heartbreak, rivalry, friendship and ostracism. Celebrity PR exploits this, nurturing concern for artificially created pop-up personalities as though they were not only real people but – and herein lies the genius - inhabitants of our own social circles.

When Taylor Swift’s squad of impossibly good-looking BFF’s hit the red carpet, young women, tortured by the eternal question of how to ingratiate themselves with the local queen bee, take serious notice. When the squad depart before Selena Gomez’s ex, Justin Bieber, delivers his big comeback performance, they underline the importance of #squadgoals and the value of running with the cool crowd.

One grand theme, however, towers over all gossip, faux news and social media blathering. It animates our real gossip with and about real people. The pithiest description I can muster for that theme is the “price of sex”.

It doesn’t take much imagination to see sex as a transaction in which consent is traded for affection, kindness, co-parental devotion, or even cold, hard cash. Most relationships involve plenty of give-and-take in which consent, affection and hard work flow both ways. Our evolved needs for sex, love and affection take on an economic flavour, emotional goods traded on an unseen mating market.

At almost any time there are more men than women looking for sex. Not out of mismatched desire or aptitude, but more fundamentally because women’s sexuality is suppressed far more profoundly than that of men. This scarcity renders female consent valuable, pushing up the “going rate”.

At almost any time there are more men than women looking for sex because women’s sexuality is suppressed far more profoundly than that of men.

The million ways people hold women to different standards from men add up to suppress women’s sexuality. The way women dress, move or twerk, the things they say, and their enthusiasm for sex attracts judgment from men and from other women. Every slut-shaming comment, every call for Miley Cyrus to “put some clothes on” drives sex into the dark spaces of our lives, making it appear rare.

And when sex is rare, it becomes precious, and valuable. Sex becomes more of a transaction, and wealth, power and privilege become far more important than character, kindness and sex appeal in determining who gets laid, who marries whom, and who sleeps alone.

2015 VMA Music Video of the Year finalist: Mark Ronson “Uptown Funk”, featuring Bruno Mars. Note the proliferation of men and the mere implication of rare, desirable, female sexuality. Precisely the conditions that push up the price of sex.

This certainly looks like patriarchy at work. But not the “all men benefit from the suppression of all women” kind. A high price of sex benefits rich, powerful individual men: the actual patriarchs. They can afford the high price, and a high price keeps young, poorer men out of the market.

And while suppression costs all women, in guilt and diminished sexual joy, many women benefit from a high price of sex. Married women, older women and wealthy women benefit when prudish norms keep the young, beautiful and less well-heeled from leveraging their sex-appeal. But a high price of sex also makes the sexual bargain more lucrative for those women at the peak of their youthful beauty.

The hyper-sexual world of music videos fascinates so many viewers because it promises that sex is all-around, fast and largely free of charge. Sex, I might add, with today’s paragons of youth, beauty, wealth and power. Music videos and awards ceremonies achieve the impossible: selling the dream of being both young and wealthy, and, paradoxically, giving a glimpse of sex unshackled from wealth.

Of course neither MTV nor Hollywood are real places. They exist between the messy and uncomfortable reality of real life and the confected, controlled business of “reality” television. Their power comes from making fans care about gossip the way we would if it really concerned their lives.

It pays to remember that we cannot accurately gain from the entertainment industry the information we most seek: how much sex is happening among real people in our own local worlds, and what do we have to do to get it?

2015 VMA Music Video of the Year finalist: Beyonce “7/11”. Not a single man visible; unrestrained female joy with no direct reference to men.

Interested in how the price of sex shapes societies? I am talking about this topic in Melbourne on Thursday October 1 for the New Scientist Live_ event “Evolution of Sex”, alongside renowned palaeontologist, Dr John Long.

This opinion piece was first published in the The Conversation.