Opinion Semitransparent solar cells: a window to the future?

Solar windows can harness the sun's energy while maintaining enough transparency to function as a window, write Matthew Wright and Mushfika Baishakhi Upama. 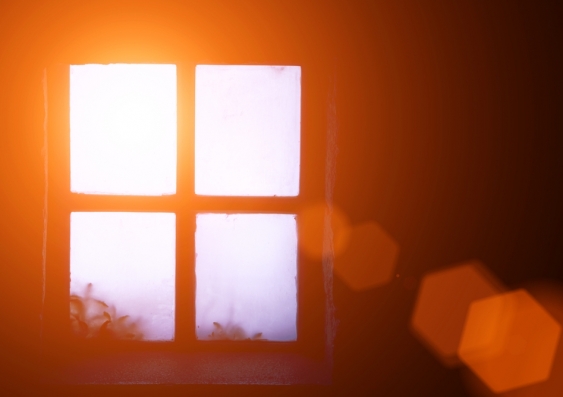 With between 5 billion and 7 billion square metres of glass surface in the United States alone, solar windows would offer a great way to harness the Sun’s energy. Our research represents a step toward this goal, by showing how to make solar panels that still let through enough light to function as a window.

The economics of renewable energy are becoming increasingly favourable. In Australia and many other parts of the world, silicon solar cells already dominate the rooftop market. Rooftop solar power offers an increasingly cheap and efficient way to generate electricity.

But while great for roofs, these silicon modules are opaque and bulky. To design a solar cell suitable for windows, we have to think outside the box.

When we put a solar panel on a roof, we want it to absorb as much sunlight as possible, so that it can generate the maximum amount of power. For a window, there is inevitably a trade-off between absorbing light to turn into electricity, and transmitting light so we can still see through the window.

When thinking about a cell that could be fitted to a window, one of the key parameters is known as the average visible transmittance (AVT). The is the percentage of visible light (as opposed to other wavelengths, like infrared or ultraviolet) hitting the window that travels through it and emerges on the other side.

Semitransparent solar cells convert some sunlight into electricity, while also allowing some light to pass through. Photos: Author provided

Of course, we don’t want the solar window to absorb so much light that we can longer see out of it. Nor do we want it to let so much light through that it hardly generates any solar power. So scientists have been trying to find a happy medium between high electrical efficiency and a high AVT.

A matter of voltage

An AVT of 25% is generally considered a benchmark for solar windows. But letting a quarter of the light travel through the solar cell makes it hard to generate a lot of current, which is why the efficiency of semitransparent cells has so far been low.

But note that electrical power depends on two factors: current and voltage. In our recent research, we decided to focus on upping the voltage. We carefully selected new organic absorber materials that have been shown to produce high voltage in non-transparent cells.

When placed in a semitransparent solar cell, the voltage was also high, as it was not significantly lowered by the large amount of transmitted light. And so, although the current was lowered, compared to opaque cells, the higher voltage allowed us to achieve a higher efficiency than previous semitransparent cells.

Having got this far, the key question is: what would windows look like if they were made of our new semitransparent cells?

Do you see what I see?

If your friend is wearing a red shirt, when you view them through a window, their shirt should appear red. That seems obvious, as it will definitely be the case for a glass window.

But because semitransparent solar cells absorb some of the light we see in the visible spectrum, we need to think more carefully about this colour-rendering property. We can measure how well the cell can accurately present an image by calculating what’s called the colour rendering index, or CRI. Our investigation showed that changing the thickness of the absorbing layer can not only affect the electrical power the cell can produce, but also changes its ability to depict colours accurately.

A different prospective approach, which can lead to excellent CRIs, is to replace the organic absorber material with one that absorbs energy from the sun outside the visible range. This means the cell will appear as normal glass to the human eye, as the solar conversion is happening in the infrared range.

However, this places limitations on the efficiency the cells can achieve as it severely limits the amount of power from the sun that can be converted to electricity.

So far we have created our cells only at a small, prototype scale. There are still several hurdles in the way before we can make large, efficient solar windows. In particular, the transparent electrodes used to collect charge from these cells can be brittle and contain rare elements, such as indium.

If science can solve these issues, the large-scale deployment of solar-powered windows could help to bolster the amount of electricity being produced by renewable technologies.

So while solar windows are not yet in full view, we are getting close enough to glimpse them.