UNSW Engineering stories this year were filled with great discoveries, including the missing jigsaw piece in quantum computing to a new way of making green ammonia. 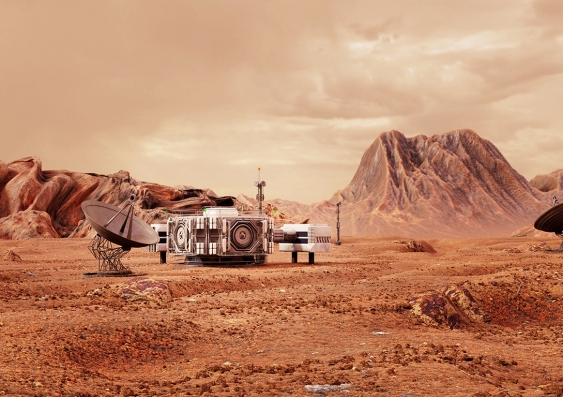 Settlement on Mars and quantum computing discoveries are just some of the stories that captured readers' attention in 2021. Image: Shutterstock

Earlier this year, chemical engineers at UNSW Sydney and University of Sydney found a way to make ‘green’ ammonia from air, water and renewable electricity that does not require the high temperatures, high pressure and huge infrastructure currently needed to produce this essential compound.

And the new production method – demonstrated in a laboratory-based proof of concept – also has the potential to play a role in the global transition towards a hydrogen economy, where ammonia is increasingly seen as a solution to the problem of storing and transporting hydrogen energy.

Dr Emma Lovell, a co-author on the paper from UNSW’s School of Chemical Engineering, says the traditional way to make ammonia – known as the Haber-Bosch process – is only cost-effective when produced on a massive scale due to the huge amounts of energy and expensive materials required.

UNSW’s Prof. Andrew Dzurak and Dr. Jarryd Pla have removed a major obstacle that has stood in the way of quantum computers becoming a reality: they discovered a new technique they say will be capable of controlling millions of spin qubits – the basic units of information in a silicon quantum processor.

Until now, quantum computer engineers and scientists have worked with a proof-of-concept model of quantum processors by demonstrating the control of only a handful of qubits.

The next goal? The team plans to use this new technology to simplify the design of near-term silicon quantum processors – so watch this space.

Speaking of space, ever dreamt of flying to Mars? It could be possible by 2050, if autonomous mining processes quickly become commercially viable.

That’s the view of Prof. Serkan Saydam who says the focus of creating a colony on Mars is finding water – and being able to extract it and process it using robots before humans land.

“Innovation in robotics and autonomous systems are clearly important so that we have the water ready and the hydrogen separated and ready for when human beings land,” he says.

Flying cars could soon be ready for take off

Flying cars could soon be flown by commuters to work or even over longer distances for leisure travel.

Resembling a cross between a drone and a small aircraft, they have wings and typically include between four to eight rotors and occupy the air space above where you’d expect to see drones flying but below standard flying commercial aircrafts.

UNSW aerospace design expert, Dr Sonya Brown from the School of Mechanical and Manufacturing Engineering, says the aim of these vehicles is to eventually provide another means of urban air mobility to help reduce congestion on the road.

Despite what people may think, the dark web isn’t just used to hide criminal activity but is becoming increasingly popular with internet users who simply want to safeguard their privacy.

Computer Security expert, Professor Sanjay Jha from UNSW School of Computer Science and Engineering, says there are many other reasons why someone may use it.

“Many journalists and political activists use the dark web as a safe place for free speech,” he says.