The future of the world’s largest ice sheet and rising sea levels depend on urgent action on global warming, study finds. 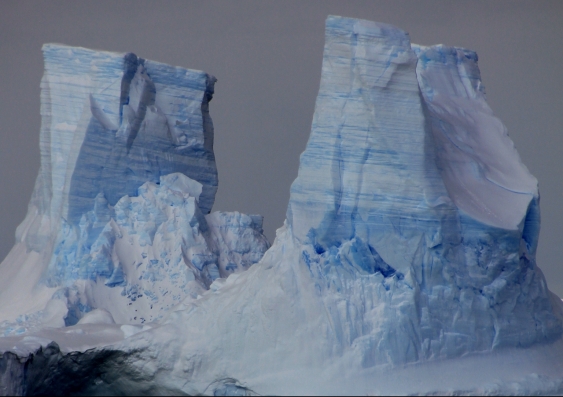 A new study suggests the worst effects of global warming on Earth’s largest ice sheet can be avoided if the world meets the climate targets outlined in the Paris Agreement – but if we fail, then the melting of the ice sheet will have a drastic impact on sea level rise.

The research was published today in Nature by an international team of climate scientists including experts from the Australian Research Centre (ARC) Australian Centre for Excellence in Antarctic Science (ACEAS), at UNSW Sydney, the University of Tasmania (UTas) and the Australian National University (ANU).

The authors say we risk awakening a ‘sleeping giant’ if global temperatures go beyond two degrees Celsius above pre-industrial levels.

The East Antarctic Ice Sheet (EAIS) could remain mostly stable over coming centuries, adding less than half a metre to sea-level rise by the year 2500, if urgent action is taken now to limit global warming, the study finds.

But, if temperatures rise above two degrees Celsius, sustained by high greenhouse gas emissions in the coming decades, we lose our chance to keep that ice sheet dormant.

The researchers found that melting of the East Antarctic ice sheet could contribute around one to three metres to sea levels by 2300 and around two to five metres by 2500.

Co-author Scientia Professor Matthew England at UNSW Science and Deputy Director of ACEAS at UNSW Sydney, says that this is on top of the sea-level rise caused by the thermal expansion of the ocean and the melting of ice elsewhere.

Prof. England led the analysis of recent and predicted ocean warming around East Antarctica. He says the waters in this part of the world are difficult to observe, so not a lot is known about them. 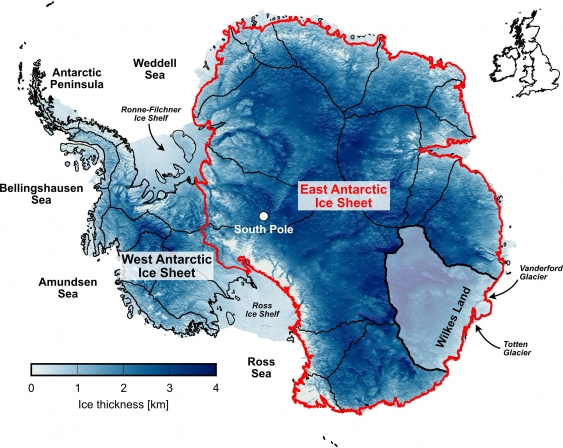 “There are very few repeat measurements of ocean temperatures around East Antarctica. But we already have evidence that relatively warm waters interact with the ice shelves there in key locations, including places where the base of the ice sheet is sitting on ground well below sea level. This makes the ice sheet vulnerable to rapid destabilisation.

“Already, from satellite observations, we can see signs of thinning ice and its retreat – and our models show that the rate of ocean warming will only increase dramatically if we don’t reduce greenhouse gas emissions.”

The EAIS isn’t as stable as once thought

The Australian Antarctic Territory covers about 42 per cent of Antarctica and is located on the EAIS. The area is nearly 80 per cent of the size of Australia itself. The EAIS has always been considered less vulnerable to climate change than the West Antarctic Ice Sheet and is typically overlooked as a potential source of sea level rise.

The researchers examined how the EAIS responded to warm periods in Earth’s past and analysed projections made by existing studies to determine the impact of varying levels of future greenhouse gas emissions and temperatures on the ice sheet by the years 2100, 2300 and 2500. 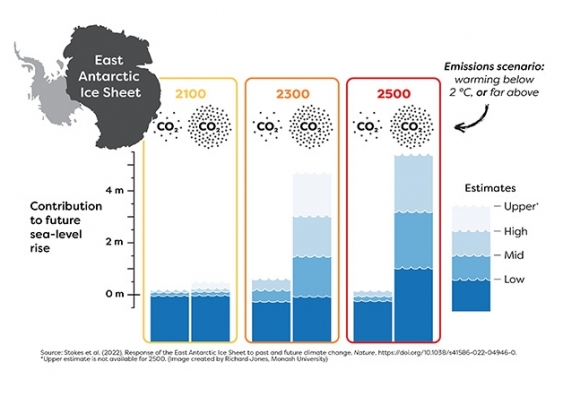 Contribution of sea-level rise from the EAIS under different forecasts. Graphic: Richard Jones

“A key lesson from the past is that the EAIS is highly sensitive to even relatively modest warming scenarios. It isn’t as stable and protected as we once thought,” says co-author Professor Nerilie Abram, Deputy Director of ACEAS at ANU.

“Achieving and strengthening our commitments to the Paris Agreement would not only protect the world’s largest ice sheet but also slow the melting of other major ice sheets, such as Greenland and West Antarctica, which are more vulnerable and at higher risk than the EAIS to global warming.”

Co-author Professor Matt King, Director of ACEAS at UTas, as the study highlights how much work is needed to find out more about East Antarctica.

Read more: Antarctic ice sheet changed alarmingly quickly in the past – and it may be happening again now

“Our research at ACEAS focuses on getting ahead of the changes and surprises that keep emerging in our part of the world so communities, industries and governments around the world can make informed decisions on mitigating and adapting to climate change.”

With global mean temperatures already at 1.1 degrees Celsius above average since pre-industrial times, the ACEAS authors say our window of opportunity to shield the EAIS from the impacts of climate change is quickly closing.

“Strengthening worldwide commitments to the Paris Agreement would better protect and slow the melting of all ice sheets,” Prof. England says.